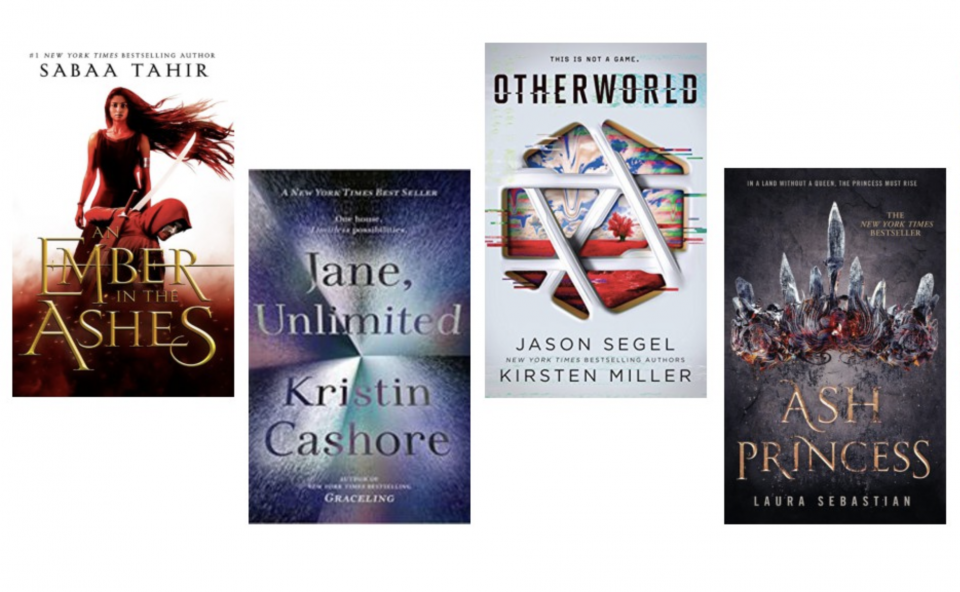 Even Netflix eventually runs out of interesting things to binge on. Now is the perfect time to encourage your kids to crack a book that has nothing to do with school assignments.

Here are a few suggestions:

This lauded fantasy series has gained big traction over the last few years as each new addition comes out. Follow both Laia, a lower-class girl infiltrating an imposing military school to spy for her tyrannical empire in exchange for their help in freeing her captive brother, and Elias, a boy trying to break free of his role as an enforcer of the oppressive regime and leave it entirely. The book is split between their points of view, and they might be more intertwined than either of them knows.

Jane is lost and without a strong sense of direction in life after the tragic loss of her aunt. However, she suddenly has nothing but directions to go on as she finds herself in a mysterious mansion, and each direction offered has its consequences. This novel offers an interesting and engaging experience akin to a choose your own adventure that gives a new take on the coming of age/search for identity archetype.

Like something out of Black Mirror, Otherworld is a video game sold to a futuristic world in which the people can play in a completely sensory immersive experience. The Company that makes it says it’s so addicting that you’ll want to play forever. Simon is about to find out that this game might change humanity as we know it. Find out how in this sci-fi thrill ride.

Theodosia’s kingdom was invaded and taken from her mother when she was only six. The man who took everything from her, the Kaiser, ridiculed, abused, and held her captive while she watched the people of her nation be enslaved. One day the Kaiser pushes her too far, and she is no longer able to settle for surviving. She has two weapons that she can use to liberate herself and her people—an iron will and a mind sharper than any sword. It’s her time to rise.

A High-Gothic/Victorian tale of monsters, mad scientists, and new interpretations of familiar characters. Mary Jekyll, yes—the daughter of THAT Jekyll, lost her father when she was very young. Now she has lost her mother, too. When handling her mother’s final affairs, she learns of an account set up to maintain a mysterious figure named Hyde. Nothing here goes as you expect. A reinvention of the classic monsters that is worthy of the originals.

Two warring peoples, Goblins and Elves. Two nerdy scholars, one of each side. The Elf, Brangwain, is tasked with delivering an important peace treaty through enemy territories. The Goblin, an archivist meant to play host to the emissary. Will a friendship bloom despite cultural differences? What will happen when they accidentally get embroiled in a political mess that could get them both killed? Find out in this National Book Award Finalist.

Young Gabriel thought he had a nearly perfect life in the idyllic town of Birdsong, USA. However, when his first ride on the brand-new bike he got for his 12th birthday almost ends in a horrible tragedy, he is saved by Meriwether Hunter, an African-American veteran of WWII. This act of bravery soon leads to a close friendship, but the more he learns about his new friend’s life story, the more he understands how Meriwether’s life in segregated Birdsong is vastly different from his. Meriwether’s life, deeds, and stories make Gabriel realize what real heroism is.

Not a recent work, but one that should be a must-read for every young mystery fan; The Westing Game is akin to a more child appropriate version of the works of Agatha Christie or the recent film Knives Out. An eccentric millionaire leaves a complicated will in the form of an elaborate game for 16 heirs to vie for the entire fortune. Paired in seemingly random ways, they must play this baffling game for the ultimate reward.

When two runaway girls find themselves in a churning and dangerous city, they quickly realize they are in over their heads. Life gets better when they befriend two homeless boys on an abandoned bridge. They become like family and finally get to explore life out from under the thumbs of adults who they couldn’t trust. But, when something happens that threatens the safety of the new family, a tough choice has to be made about where to get help.

This graphic novel is the cartooned diary of a middle school boy whose life is upended, and he is thrust into a completely different world in the form of a prestigious private school. Not only is he the new kid, but there are also few other minority children in the entire school. He soon begins to feel caught between worlds and accepted by neither. This is a wonderfully nuanced look at the alienation often felt in middle school and the big and small ways prejudices and cruelty can happen even by ignorance. It is also a tale of friendship and coming of age. It truly runs the gambit of emotional highs and lows.

Editor’s Note: Have a suggestion for GLF readers?  We want to hear from you! Email: Tricia@goodlifefamilymag.com.

How Parents Can Help Their Children Stress Less

9 Tools to Help You Stay Connected During the Coronavirus Pandemic