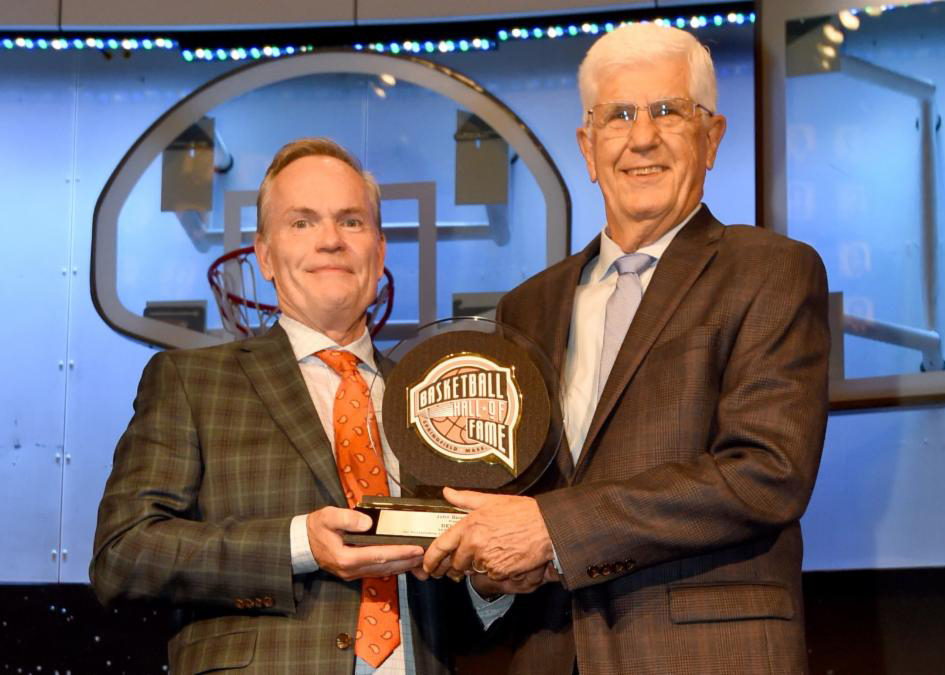 After roughly six decades connected with basketball, Del Harris has just about seen and done it all.

And yet, some things in the sport still give him a thrill – like the major honor that was bestowed upon the former Maverick assistant coach during festivities for the Naismith Memorial Basketball Hall of Fame induction weekend. Harris received the John W. Bunn Lifetime Achievement award, the most prestigious honor presented by the hall outside of enshrinement.

But that’s not the only thing that will warm his heart.

Three of the players he mentored as an NBA head coach were enshrined into the 2019 hall of fame class – Sidney Moncrief, Jack Sikma and Vlade Divac.

“I am deeply honored,” Harris said. “John Bunn was instrumental in the founding of the hall, but was so much more – a great teacher who wrote on coaching the game as well. Had he done what he did 10 or 20 years later, he’d be a household name.

“And it’s even more special with those three guys that I was able to coach going into the hall. They were all very gifted players – great players – and it was an honor to coach them.”

Moncrief, Sikma and Divac will push the number of players Harris-coached NBA players in the hall of fame to more than a dozen. Among the others he led either as either a head coach or an assistant: Shaquille O’Neal, Moses Malone, Elvin Hayes and Steve Nash.

Moncrief, of course, has a connection with the Mavericks. He served as assistant coach for the Mavericks on Don Nelson’s staff from 1999 to 2003. In addition, Paul Westphal is going into the hall, also as a player like Moncrief, and he also is linked to the Mavericks, having served one year as an assistant on Avery Johnson’s staff.

Harris is nothing short of a basketball legend for the simple fact that he accomplished so much at so many different levels.

All that diversity has made it difficult for Harris to be pigeon-holed into a category, which may be one explanation why he isn’t already in the hall of fame. You can go in as a player, coach or contributor, but when you’ve done a lot of both coaching and contributing to the good of the game, sometimes, you slip through the cracks.

It took Don Nelson nine nominations before he finally was elected to the all. This year was the eight them Harris has been nominated. He has yet to receive the required number of votes for enshrinement.

That makes moments like the one all the more meaningful for him.

“I feel honored, obviously, and when you get to be past 80, you’re glad for any recognition,” the 82-year-old joked.

Harris may yet be destined for the hall of fame as a member. There were 48 recipients of the Bunn Award before this summer. Of those, 23 are in the hall of fame. Harris was joined as a recipient of the Bunn Award by Harry Glickman, the father of pro sports in Oregon who was largely responsible for getting the Trail Blazers and building their team into an NBA champion in 1977.

Harris, meanwhile, was head coach of the Houston Rockets when they went to the NBA finals in 1981 and lost to Boston. That team featured Moses Malone and Calvin Murphy, both hall of famers. Harris was head coach for 12 full seasons in the NBA, won 556 and reached the playoffs 11 times.

He’s one of only seven people (Michael Jordan and John Wooden are among the others) who have won the Bunn Award as well as the Naismith Legacy Award.

Harris has remained active until he recently had to suspend his golf-playing career in deference to back pain that has become too problematic. Professionally, he still serves as vice president of the Texas Legends, the Mavericks’ G-League affiliate.

Harris said that, if he does make the hall of fame as an inductee some day, he believes it would make the best sense to go in as a contributor rather than a coach. He’s written a half-dozen books about the game’s strategies and philosophies. His work as head coach of the China and Puerto Rico teams featured some of those countries’ best international moments. He also was an assistant coach for the Dominican Republic with John Calipari as the head coach.

Canada and the U.S. are national teams he’s also served as an assistant coach for.

Put it all together and it’s been a long, wildly successful career that was commemorated in Springfield, MA on September 6, 2019. Not bad for a guy who started out coaching junior-high boys and girls.

Seniors Save at the State Fair with DART