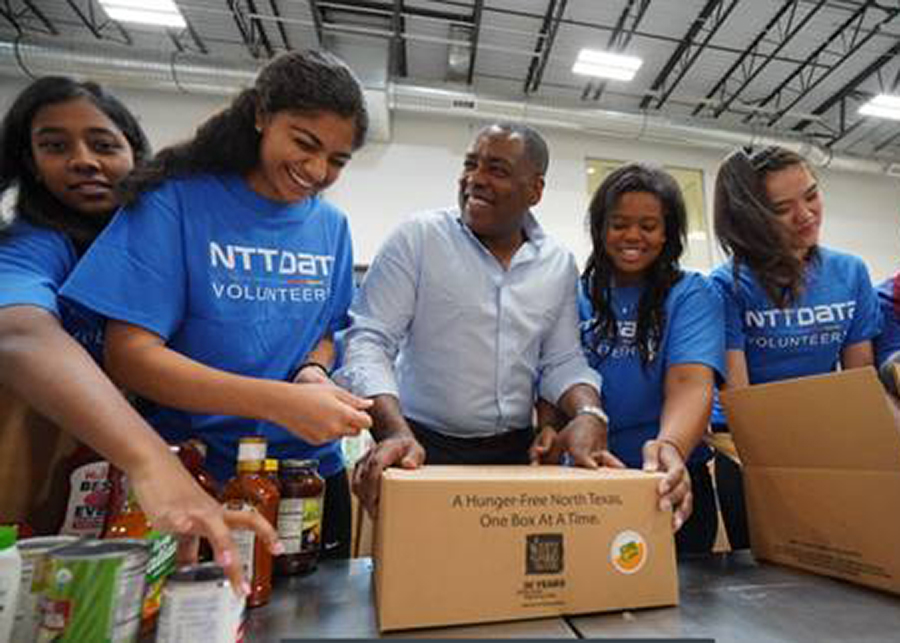 Getting paid to work is great, but there’s something about giving back that is vastly rewarding. As high school students in the Plano Mayor’s Summer Internship Program finished their first weeks on the job (and look forward to that much-anticipated paycheck), Mayor Harry LaRosiliere made sure they didn’t forget a crucial lesson – the value of volunteering.

On June 21, he rolled up his sleeves and joined 120 high school interns to volunteer at the North Texas Food Bank for the first-ever Community Service Day, sponsored by NTT DATA Services.

Mayor LaRosiliere, the students and NTT DATA volunteers spent several hours sorting vegetables and canned and dry goods before packaging the items into boxes for distribution to North Texas families in need. Before the morning’s end, they had unloaded four pallets and packed 184 boxes filled with 8,675 lbs. of food that will provide 7,229 meals!

Mayor LaRosiliere spoke about the significance of community service at every age (even as a teen) and the obligations that come with earning a paycheck. He noted that adding this “hands-on service component” is important in developing the Interns into well-rounded, productive and engaged citizens.

“Your paycheck is a milestone, and it’s a first step toward adulthood and independence – but with that comes responsibility,” said Mayor LaRosiliere. “Our hope for you today is that you learn the value of community service and giving back. My experience in life has been that the more you give the more you get in return.”

The Mayor also talked about appreciating others, and his words resonated with the interns.

“It was nice to help people out; it’s something I don’t do very often,“ said Ibrahim Saifullah, a senior at Plano East Senior High School who is interning at Liberty Mutual. “Also, the Mayor said, ‘it’s not happiness that brings gratitude, but gratitude that brings happiness,’ and that was pretty meaningful.”

“I was helping package boxes of food for seniors, and we prepared enough for about 5,000 people,” said Jenna. “It meant to a lot to have the experience to help others in the community and do something that is bigger than you.”

Mayor LaRosiliere expressed his thanks to NTT DATA for their strong support of the program, hosting 29 student interns and teacher externs during the past six years.