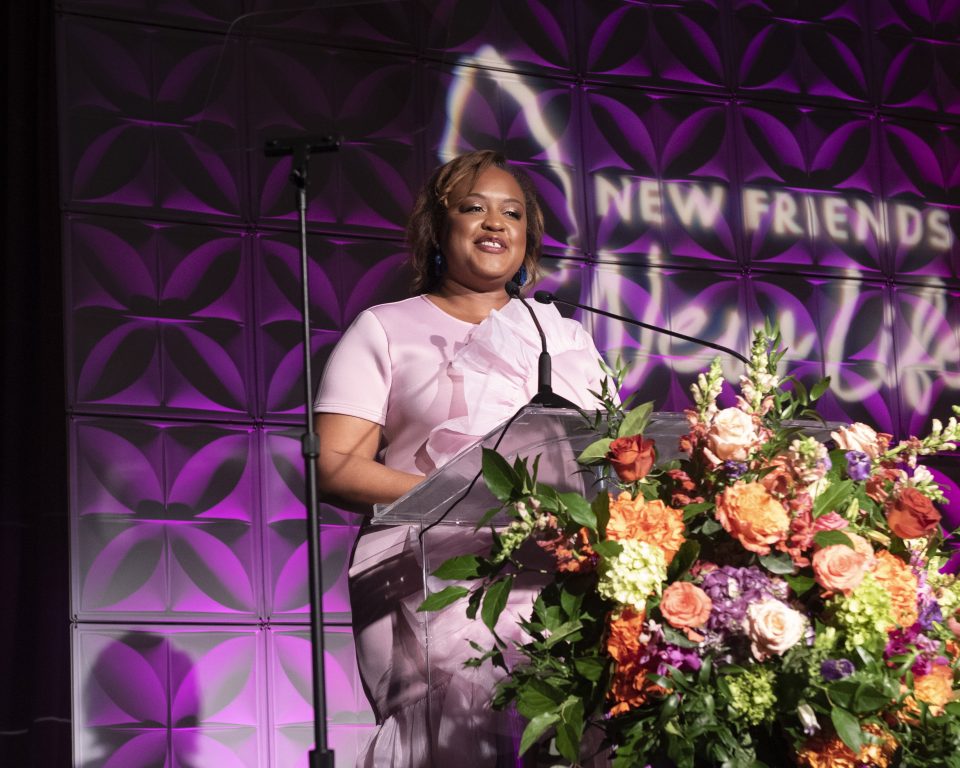 Award-winning actress Julia Ormond inspired a crowd of nearly 800 attendees at the November 4 New Friends New Life (NFNL) Luncheon by illustrating how small choices can have a monumental impact. In addition to discussing how the everyday choices we make can create a better, safer world, Ormond cleverly demonstrated how even a small donation can add up to a large sum when magnified by the power of many.

In advance of the luncheon, the actress, turned human rights activist, spent two days in Dallas immersing herself in the work of the nonprofit, getting to know the staff, board members, patrons, and members of NFNL – displaying an unusually generous gesture of support and interest in the agency’s mission.

As emcee Shelly Slater stated at the start of the program, “while the issue of human trafficking is heavy, heartbreaking, and hard, you will learn today the New Friends New Life is offering hope, healing, and a measure of happiness to hundreds of brave survivors and vulnerable youth each year.”

Slater introduced luncheon Co-Chairs Katherine Wynne, Kristi Sherrill Hoyl, and Melissa Sherrill Martin who thanked friends and supporters. Wynne kicked things off by recognizing Honorary Co-Chairs Matrice Ellis-Kirk and former Dallas Mayor, Ambassador Ron Kirk for “caring about this critical cause.” Hoyl shared that there are an estimated 313,000 human trafficking victims in Texas, with 79,000 being minors. She highlighted the work of NFNL’s Youth Resource Center, which has provided hope for nearly 550 girls, ages 12-22 since opening in 2018. Martin recognized top sponsors Nancy Ann and Ray Hunt, Tracey Nash-Huntley and David Huntley, Ashlee and Chris Kleinert, Southwest Airlines, and the Jensen Project as well as Nancy and Randy Best and Carolyn and David Miller.

Following an invocation by Dr. Cynthia Mickens Ross, Matt Osborne and Priya Murphy of NFNL presented the 2022 ProtectHER recipients, who were honored for the impact they make as advocates and volunteers.

Lynn McBee, a philanthropic and leadership force in Dallas and longtime champion for women and girls, understands that education is a key that can unlock access and opportunity for vulnerable youth. A biochemist who spent years as a research scientist, McBee now serves as CEO of the Young Women’s Preparatory Network. Her board service spans dozens of nonprofit groups representing the community’s most pressing social issues – domestic violence, homelessness, and sex trafficking. “Making sure girls and women reach their potential brings me great joy,” said McBee. “New Friends New Life helps women and girls soar above their limits and achieve their dreams. Join me in working harder for these young women and girls.”

The financial and volunteer support of Santander Consumer USA Foundation has provided the funding for an on-site Legal Advocacy Clinic with a staff attorney working on site at NFNL to help members with legal contracts and cases preventing them from moving forward in life. Additionally, Santander employees have volunteered countless hours, including giving survivors skills needed to face the world. “I have been privileged to attend graduations at NFNL and hear stories of women fighting against all odds who have overcome many obstacles,” said Suzanne Massey, vice president, Santander Consumer USA Foundation. “Your work, your mission transforms lives, and we at Santander stand beside you.”

Dr. Nissi Hamilton, a child sex trafficking survivor who became an award-winning advocate, gave an impassioned acceptance speech to the riveted audience. Dr. Hamilton won the Foundation for Improvement of Justice’s 2022 Paul H. Chapman Award for her advocacy in the passing of the Texas Smart Act, which was signed into law in 2021 and provides protection and resources to trafficking victims. She is a passionate leader in the national anti-trafficking movement, a sexual abuse counselor, and CEO of the nonprofit Nissi’s Network, Inc. She captivated the audience with a powerful recount of her journey from trauma to triumph. “Human Trafficking is a second slavery. By the time I was 15, I had slept on countless bathroom floors. I was a homeless teen mother. I had to stand in front of a judge who did not honor me, protect me, or see me. I lived in foster care and was transferred to live in my trafficker’s home with my children by the time I was 16. I lost my children and studied law to get them back – eight in all.” She encouraged attendees to be a “burden barrier,” see trafficking survivors and offer support as they rebuild their lives.

New Friends New Life CEO Bianca Davis took the stage highlighting the work of the nonprofit’s Youth Resource Center, a place where 546 girls “have come to feel seen, safe, and supported.” She shared impactful stories and stated that the program now provides a tailored path forward for varying age groups. In thanking donors for the role they play in restoring and empowering the survivors, she shared that the organization was just $40,000 away from its financial goal of the luncheon and encouraged additional support to help restore and empower survivors.

Davis then introduced keynote speaker, Emmy award-winning actress, founder, and activist Julia Ormond, who flew into Dallas three days prior to immerse herself into the work of the organization, meet the women in the program, visit with supporters, and participate in one of NFNL’s educational bus tours illustrating that trafficking is happening everywhere.  Ormond is the first and former United Nations Goodwill Ambassador against Trafficking and Slavery. She has traveled the world and has been fighting trafficking since the 1990s.

Shelly Slater began the conversation by noting that in all the years of this luncheon, she did not recall any speaker so passionate about the mission that they would come into town days early to learn more about the work of the organization and those it serves. She asked Ormond about her attachment to fighting trafficking.

Ormond shared from her perspective that “enslavement and forced labor are like the cancer in humanity. With cancer you do chemo to get right to the tumor. With trafficking we also need to take a laser-like approach that gets right to the tumor. We need to understand that when we buy a product from a supply chain, we are supporting value chains, the people who are in forced labor.”  She shared how businesses as well as the consumer play roles in ensuring the supply chain for goods is free of slavery and that we need to make sure that “workers have access to human rights.”

She talked about visiting shelters all over the world and always leaving with sadness. When walking into New Friends New Life, “all were so welcoming and achieving a goal of providing a safe space with hope.” She complimented the skilled staff who lead the bus tours which she described as “something very clever” demonstrating trafficking is happening everywhere while sharing her new knowledge of the “high-five” area in Dallas. “We must have the courage to step up and hear it” to make an impact.

Slater asked her about her trips around the world and the slavery she had witnessed. She highlighted her trip to Lake Volta in Ghana where enforced labor of children was discovered because children’s bodies were washing up onto the shores. When traveling there, she expected to see skinny children, but instead she saw “a very muscular, well-built young man.” She was told by those she was with that by his height they believed him to be 12 years old, and he had likely done about five years of hard labor.

She began to think about the fish they were catching and wondered, “Any chance I have purchased and eaten this fish or fed it to my children? If so, I am supporting a system trapping people in enslaved and forced labor. My mission became to work on transparency to protect people.”

Ormond is the founder of the nonprofit ASSET Campaign, which is the source of global legislation the Transparency in Supply Chains Law that requires major businesses to publicly disclose their policies to prevent human trafficking and forced labor in product supply chains.

“Through this new law, we now look at a company’s disclosure and see everything, and if that leads to a company who has found 25 child slaves, then this company showed up and transparency works.”

Slater summarized, “It really is all about education and transparency, and thinking where did that come from? I am not getting that Tilapia from across the sea if it is tied to this. It all comes back to dignity.”

Ormond then illustrated the power we each have to make a difference in the world. She said that you need resources in the world to do the heavy lifting, such as New Friends New Life, but we should never lose sight of the fact that a small choice has power and can be effective.

At the conclusion of the luncheon, the impact of Ormond’s words was evident when day-of donations totaled $99,000 helping NFNL surpass its goal with $560,000 in net proceeds raised.

# # #About New Friends New Life: Founded in Dallas, Texas, in 1998, New Friends New Life (NFNL) restores and empowers trafficked and sexually exploited teen girls, women and their children, and drives awareness of the issue and its prevalence. By providing access to education, job training, interim financial assistance, mental health, and spiritual support, New Friends New Life helps women and their children overcome backgrounds of abuse, addiction, poverty, and limited opportunities. In 2021, NFNL served 312 members. NFNL also educates the community and works to eradicate the epidemic of human trafficking through advocacy, legislative reform and strategic partnerships that address systemic causes. In 2018, NFNL opened a drop-in Youth Resource Center (YRC) in partnership with the Office of the Governor to serve trafficked and high-risk teen girls. Since its opening, we have served 546 girls. In 2015, NFNL organized its  Men’s Advocacy Group to engage men in the fight against sex trafficking and exploitation. For more information, visit http://www.newfriendsnewlife.org

A Wonderland of Live Performances