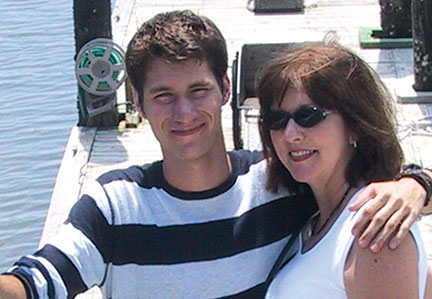 After the death of her 19-year-old son, Vanita Halliburton became a champion for change in society’s attitude about mental illness. Now, we’re talking.

Few parents can imagine a tragedy worse than the death of their child. Vanita Halliburton not only had to endure such a tragedy but also had to exist with the reality that her son took his own life.

Grant Halliburton was a gifted young artist and musician who graduated from Plano West Senior High School in 2005 and went on to attend the University of Texas at Austin. His passion for music and art accompanied by his genuine warmth and affection for the people in his life assured him a lasting place in the hearts of many. But Grant also had the demons of bipolar disorder and depression fighting inside him to take control of his life and destroy his young adulthood. Ultimately, the bad guys won the battle, and at the age of 19, Grant jumped off of a 10-story building to his death.

The Halliburton family had known for five years that Grant was struggling with some form of mental illness when they discovered he had been cutting himself in the eighth grade.  The Halliburtons did everything in their power to get help for Grant using every possible resource they could muster to help him find his way back. However, his symptoms continued to worsen over time, and Halliburton says they just simply did not have all of the information about how to help Grant or even know where to look for it. She attributes this dearth of resources to the stigma associated with mental illness.

After Grant’s death in November of 2005, Halliburton experienced all of the heartache and shock one associates with this type of tragedy. She just wanted answers as to how this could have happened to her bright and talented son who seemed to have such a promising future before him.  While searching for answers, Halliburton discovered what a silent epidemic mental illness in teens had become. The American Psychiatric Association estimates that one in five young people in the United States suffers from a diagnosable, treatable mental illness. Yet, nearly two-thirds of them get little or no help. Halliburton was determined to bring this rampant problem out of the dark and into the light. This type of situation should not happen to someone else’s child simply because a parent could not find the resources to save his or her child’s life.

Halliburton says, “At the same time that I was wrestling with the devastating grief of losing my son, I felt this fierce desire welling up inside – a desire to do something to help other families and other young people find a better ending to their stories than ours.” Thus, the Grant Halliburton Foundation was born in early 2006.

Halliburton, using her background in marketing and advertising, has created an organization determined to eliminate the mystery surrounding mental illness, and therefore, to help prevent youth suicide, promote better mental health, and strengthen the network of mental health resources for young people.   She repeatedly stresses that mental illness is simply another treatable medical condition and likens society’s mindset toward it to the stigma that was associated with cancer not so long ago.  “People whispered about ‘the C word’ as if it were a shameful disease. What has changed that? A massive ongoing effort to educate the public about cancer,” says Halliburton.

Education, Halliburton insists, is the key to changing society’s attitude toward mental illness. She is a frequent speaker to students, school staff, parents and mental health professionals on the importance of recognizing symptoms of mental illness and early intervention. Halliburton says that parents should make it a priority to know the symptoms of mental and emotional distress in their teens as readily as they know the symptoms of an oncoming cold or flu. She also believes it is important to educate teens about how to recognize the signs of mental distress in each other because teens often show different aspects of themselves to peers and can tend to hide feelings or problems from their parents.

Vanita Halliburton is a fighter and an inspiration. She says that after Grant’s death she felt she had lost so much more than her son; she lost her foundation and her faith. She fought her way out of this abyss of hopelessness and despair, and she found a way to use her heartbreak to help others. Halliburton says the thought of another young person suffering and giving up hope or another family struggling to find the right help for their child helped her realize what she had to do with the next chapter of her life. She believes that Grant would be pleased with the work the Foundation is doing to help teens and young adults navigate the darkness of mental illness. Halliburton says, “Grant was one of the most genuinely caring people I’ve ever known. He touched many lives with his boundless capacity to support and encourage.”

“When you meet Vanita, you are instantly mesmerized by the unlikely combination of grace and grit. Instead of sinking into an abyss we all imagine we’d want to fall into, this devastated mom breathes life into her son’s legacy by pouring her heart into educating families and inspiring us to change our attitude toward mental illness.  To say she inspires us is an understatement of epic proportions.”

Our VIP (Very Inspiring Parent) Award honors the everyday, and not-so-everyday, heroes in our midst. Those whose tenacity, integrity and courage inspire others to exemplify the same character and put their families and community first, in spite of the challenges life has thrown at them. Good Life Family will present the recipient with an elegant crystal award and will make a donation to the charity of their choice. There will be on VIP award recipient in each issue of Good Life Family magazine and featured on GoodLifeFamilyMag.com. For complete details or to nominate click here or email Tricia@goodlifefamilymag.com.