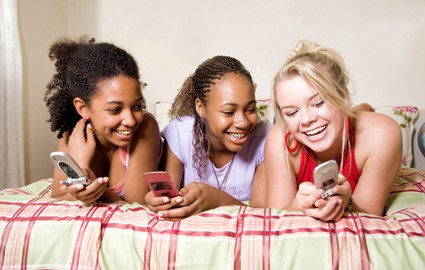 Teens, Text and the Opposite Sex

I spy them mainly at the mall. Walking around in herds, pimply faced with metal braces, all holding a cell phone with fingers dancing, sending text after text to someone who is often sitting right next to them.

This mysterious and intriguing breed piqued my interest.  I wanted to know more about how they communicate, so, I decided to go directly to the source. In all of my interviewing experience, I have never been more intimidated than sitting before a panel of teenagers.

My intention was to ask a series of questions on two basic themes:  dating and technology. What I discovered, however, is that these topics are not separate at all.  In fact, the two are so intertwined that they have defined a new standard of relationships.

A pretty brown-haired sixteen-year-old girl explained it this way:  “Like, it’s how we get to know each other. Like, you start with a text. You like, flirt with a text. Then, like, depending on whether it’s like cool, then you maybe talk on the cell phone. Then, like, you talk in person. But that’s sometimes weird. So you like stop texting.”

Once I was able to cipher through all of the “likes”, I understood, and, in some ways, was able to apply this method of romance to how we did it in my day. It’s like (yes, I said “like”), passing notes in class, only multiplied a thousand fold.

Another girl on the panel, this one with long, Barbie-like blond hair, said texting was kind of a bummer with regards to dating. “Like, it would kinda be cool for a guy to call you on a date. Now, we like meet in groups, and like we don’t have a one-on-one date.”

One important point I learned from these teens is that parents need to be alert to the fact that inhibitions are often left at the door when texting or when group dating. Parents need to read their teens’ texts and make sure group dating is somewhat supervised. And, of course, communication is key.

When I asked them questions about some of the horrible news stories with kids beating up other kids and then airing it on YouTube or sending obscene pictures via cell phone, all of them seemed pretty disgusted. “We see so much stuff. But it’s not who we are. My parents think that just because I like watching Gossip Girl that I would really do that kind of stuff. They raised me better than that.”

I really do not believe this generation is crumbling from moral decay due to their revolutionary means of communication and interaction. But, as always, it comes down to the parenting. And if we are to guide our teens into young adulthood effectively and positively, we must be plugged in and know the difference between LMAO and LMFAO.

Until we meet again,

Your Stress is Contagious

Paige McCoy Smith – Television Personality/Radio HostPaige McCoy Smith is a television personality, radio host and professional speaker who has entertained and educated audiences with content that resonates with the "not so perfect" side of life. She is a regular on WFAA’s Good Morning Texas and her radio show, 'The Not So Perfect Parent' airs on 103.7 FM each Sunday, 7 to 8 AM. Paige has made a name for herself being a real and relatable mom that gives women the freedom to be who they are: perfectly imperfect. As Paige says, "It's not about being perfect. It's about being real. Let's stumble on this journey together."

Building Up STEAM
35 Easy Ideas to try at Home