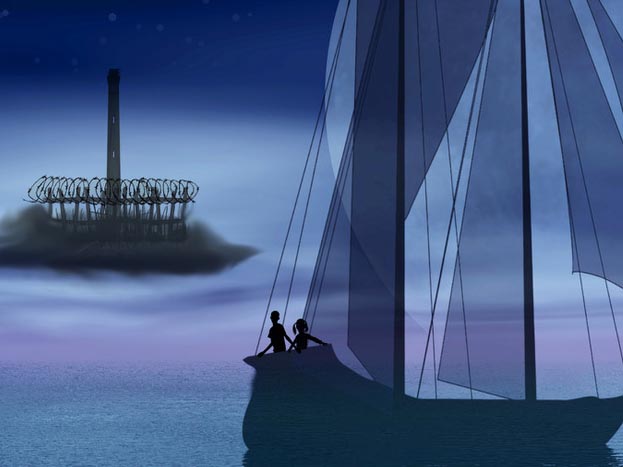 In Journey to Justice, we’re given a futuristic insight on a post-global-warming world. Following Spider and Ruby through their fast-paced adventures, Haas provides an encapsulating introduction to climate change and environmental justice that is smart, engaging and entertaining for all ages.

In his first book-length work of fiction, Tanni Haas proves that his imagination is matched by his eagerness to educate his readers on the topic of global warming and the chutzpah it takes to impact positive change. Journey to Justicefollows the adventures of Spider and Ruby, two survivors of a post-global-warming world. In this futuristic setting, the Earth is flooded, a new way of life is at play, and fast-paced adventure is abounding. Each imaginative character has an encapsulating backstory or career that contributes to the discussion of climate change and its attached dangers. Throughout their action-packed journey, Spider and Ruby are faced with a myriad of obstacles that challenge their fortitude and abilities while drawing back to several important teachable lessons on the dangers of global warming.

With a topic of such present universal importance, Haas finds a way to creatively present it to children and challenge them to begin thinking about the implications. As the story progresses, Haas explores different aspects of history that led to this world devastation. A story of determination, grit, and stamina in the face of monumental challenges, Journey to Justice shows the importance of perseverance and the individual’s ability to foster real change.

Written for a young audience of 9- to 12-year-olds, Journey to Justice is an intellectual and riveting read for all ages. Tanni Haas provides an adventure-filled, action-packed story that engages the reader from the start and does not let go.

“Spider was so proud of his brother, but he was also proud of himself and Ruby. It felt great but also a little strange to sit here, all together, in the little shack. The future wasn’t defined by division but by unity. They all had to learn how to get along.”

GLF: You’ve written other books, but this appears to be your first work of fiction. How exciting that reviewers are comparing you to Rick Riordan’s Percy Jackson and the Olympians series and to John Flanagan’s Ranger’s Apprentice series! Are you a fan of either or both of those series? How do you think Journey to Justice is (or isn’t) comparable?

TH: This is my first book-length work of fiction, although I’ve written many short stories, which have appeared in a variety of publications. And, yes, I’m a big fan of Rick Riordan and John Flanagan, and I’m honored that my book is being compared to their amazing series… As in their series, my book has three main characters – Spider, Ruby, and Luke. Even more fundamentally, my characters are also on a quest to make the world a better place to live, and go through many trials and tribulations to make that happen. … Their series are set in mythical worlds while my book takes place in a world that’s all too real!

GLF: Global warming is one of the most pressing topics of our time. Is global warming something you’re particularly passionate about, and why did you target a younger audience (9 to 12) with this message?

TH: Yes, absolutely. I believe that there’s no societal topic more critical than global warming because it concerns our very survival as a species. Every other issue we face springs from that. There are many reasons why I chose to target a younger audience with this message… the children are our future – and we need to teach them well… we need to explain what they can do themselves to carry this important work forward. Second, children have a clear sense of right and wrong… [they] understand what it takes to make the planet a better, more sustainable place to live.

GLF: Are Spider and Ruby based on any real-life public figures or people in your life? What do you want your readers to understand about them? How did you create them to be relatable to your young readers?

TH: Spider and Ruby are inspired by the young Swedish environmental activist Greta Thunberg who’s done an immense amount of work to challenge world leaders as well as ordinary people to fight global warming. I created the characters to show readers that it takes both careful thought and courageous action to make a real difference in the world. While Spider and Ruby both possess these qualities …  Spider is the more introspective of the two and Ruby the more action-oriented one. [They’re] especially relatable to young people… adults don’t fully appreciate what they’re trying to do. I think that’s something most young people recognize from their own lives!

GLF: What do you hope your readers take away from reading Journey to Justice? (without giving away the ending!)

TH: I want my readers to get the sense that everything isn’t lost yet. I hope one of the main take-aways from the book is that it’s not too late to make the planet that we all share an inhabitable place for generations to come. [Readers] will need to do their share to make that a reality. They shouldn’t look the other way and tell themselves that taking corrective action is someone else’s responsibility. Lastly … the fight for a better future isn’t necessarily going to be easy … there will be many obstacles standing in their way but that those obstacles can be overcome if they put their hearts and minds to it.

GLF: Is this the first in a series? Where will Spider and Ruby go next?!

TH: Yes, Journey to Justice is the first installment of a planned trilogy. Without giving too much away, I can reveal the following: In the second installment, Spider and Ruby learn that the whole planet isn’t flooded, as they previously thought, and they end up flying in a hot air balloon to a secret land that lies beyond a giant dam to investigate further. In the third installment, they make the long journey to Mars (the only other potentially habitable planet in our solar system) only to discover that it’s already been colonized by a group of people with evil intentions. The trilogy will conclude with Spider and Ruby returning to Earth to, once again, try to make our planet the best it can be. After all, Earth is our best hope for a long and prosperous future!

Tanni Haas, Ph.D. is a Professor in the Department of Communication Arts, Sciences & Disorders at the City University of New York – Brooklyn College.  Tanni is the author of five books and many short stories.

Journey to Justice: The Adventures of Spider and Ruby Kindle Edition

Journey to Justice, Book 1 of The Adventures of Spider and Ruby, is a fast-paced, suspenseful novel that takes place in a post-global-warming future in which the Earth has flooded. The surviving population lives on houseboats on the water or in large greenhouses deep in the water. They are all servants to a small group of people (The Chosen) who run the planet from a mysterious, man-made island. Spider, a HouseBoater, and Ruby, his friend, who’s an AquaGrower, are on a quest to free Spider’s 12-year-old twin brother Luke, who’s been arrested and imprisoned on the island for trying to organize an uprising against The Chosen. Along the way, Spider and Ruby face many dangerous obstacles including being held hostage by marauders, escaping from prison, and participating in high-speed chases.

BE THE HERO AND RESCUE YOURSELF: Creating the Inner Courage to Wear Your Own Cape

Family Values and Faith at Root of Newly Released Book