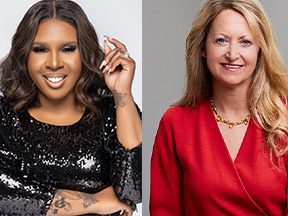 New Friends New Life (NFNL) announces the 2022 ProtectHER Award Recipients: Dr. Nissi Hamilton, a survivor, leader and expert in human trafficking; Lynn McBee, a philanthropic and leadership force in Dallas and longtime champion for women and girls; and Santander Consumer USA Foundation, which collaborates with and invests in organizations that provide positive social and cultural change. The award recipients will be honored at the Friday, November 4, New Friends New Life Annual Luncheon, 11:30 a.m., at the Hyatt Regency Dallas.

ProtectHER Award Recipient Dr. Nissi Hamilton, a survivor, leader, and expert in human trafficking, is a winner of the Foundation for Improvement of Justice’s 2022 Paul H. Chapman Award for her advocacy in the passing of the Texas Smart Act which was signed into law in 2021. This legislation provides protection and resources to trafficking victims and survivors. As a survivor herself, Dr. Hamilton has become a passionate leader in the national anti-trafficking movement.  She is a sexual abuse counselor and CEO of Nissi’s Network Inc., a nonprofit which aims to “provide holistic support for children of pimps, prostitutes, and victims of human trafficking so that they can have an opportunity to lead healthy and successful lives.” Her push for legislative reform demonstrates the power of survivors to effect positive change in our justice system. In October, Dr. Hamilton was also recognized by The Board of the Foundation for Improvement of Justice at the organization’s annual awards banquet in Atlanta, Georgia. Additionally, she is the recipient of the National Black Prosecutors Association “Profiles in Courage Award.”

ProtectHER Award Recipient Lynn McBee, a longtime community volunteer, leader, and philanthropist as well as a biochemist, has been a champion of women and young girls throughout her career. She serves as the CEO of the Young Women’s Preparatory Network which supports single-gender, college preparatory, public education giving young women the academic and leadership skills to achieve success. She first began in an advisory role at Young Women’s Preparatory Network after working three decades at New England Bio Labs in Boston as a research scientist. Her board service in Dallas spans dozens of different nonprofit groups and organizations. She has worked to combat domestic violence through the Family Place, mentored young women in service and leadership with the Junior League of Dallas, and protected young girls at risk through her leadership with the Letot Center serving teenage women who are homeless or victims of trafficking.

In January, McBee accepted an invitation from Mayor Eric Johnson to serve as the city’s workforce development czar. She is the recipient of numerous awards for her extraordinary leadership and service.

NFNL Luncheon Speaker Julia Ormond, best known for her award-winning career as an actress and producer, is also a longtime activist against human trafficking, promoting international awareness in her role as the first and former United Nations Office on Drugs and Crime (UNODC) Goodwill Ambassador Against Trafficking and Slavery. Ormond is the founder of the nonprofit ASSET Campaign which is the source of the global legislation the Transparency in Supply Chains Law that requires major businesses to publicly disclose their policies to prevent human trafficking and forced labor in product supply chains.

Some of Ormond’s best-known film work may be seen in her starring roles in Legends of the Fall, Sabrina, The Curious Case of Benjamin Button, and Che. On the small screen, Ormond received an Emmy® Award in 2010 for her role in the HBO movie Temple Grandin and one in 1997 as executive producer of Calling the Ghosts: A Story About Rape, War and Women. In 2012 she was nominated for an Emmy® for her recurring role on Mad Men. She can most recently be seen in her series regular role in The Walking Dead; World Beyond, and in the still-to-be-released Reminisce.

“We are excited to welcome our speaker and honor our award recipients, who together not only shine a light on an industry that is victimizing 25 million people around the world, but also provide transformative contributions as advocates, volunteers and donors,” said Bianca Davis, CEO, New Friends New Life. “We thank each of you as you ‘stand for her’ and help us restore hope to so many trapped in this horrific industry.”

Underwriting sponsorship opportunities begin at $2,500.  A limited number of individual tickets will be released closer to the date and will begin at $250 each.

Luncheon media sponsors are The Dallas Morning News and PaperCity.

About New Friends New Life: Founded in Dallas, Texas, in 1998, New Friends New Life (NFNL) restores and empowers trafficked and sexually exploited teen girls, women and their children, and drives awareness of the issue and its prevalence. By providing access to education, job training, interim financial assistance, mental health, and spiritual support, New Friends New Life helps women and their children overcome backgrounds of abuse, addiction, poverty, and limited opportunities. In 2021, NFNL served 312 members. NFNL also educates the community and works to eradicate the epidemic of human trafficking through advocacy, legislative reform and strategic partnerships that address systemic causes. In 2018, NFNL opened a drop-in Youth Resource Center (YRC) in partnership with the Office of the Governor to serve trafficked and high-risk teen girls. Since its opening, we have served 546 girls. In 2015, NFNL organized its  Men’s Advocacy Group to engage men in the fight against sex trafficking and exploitation. For more information, visit http://www.newfriendsnewlife.org.