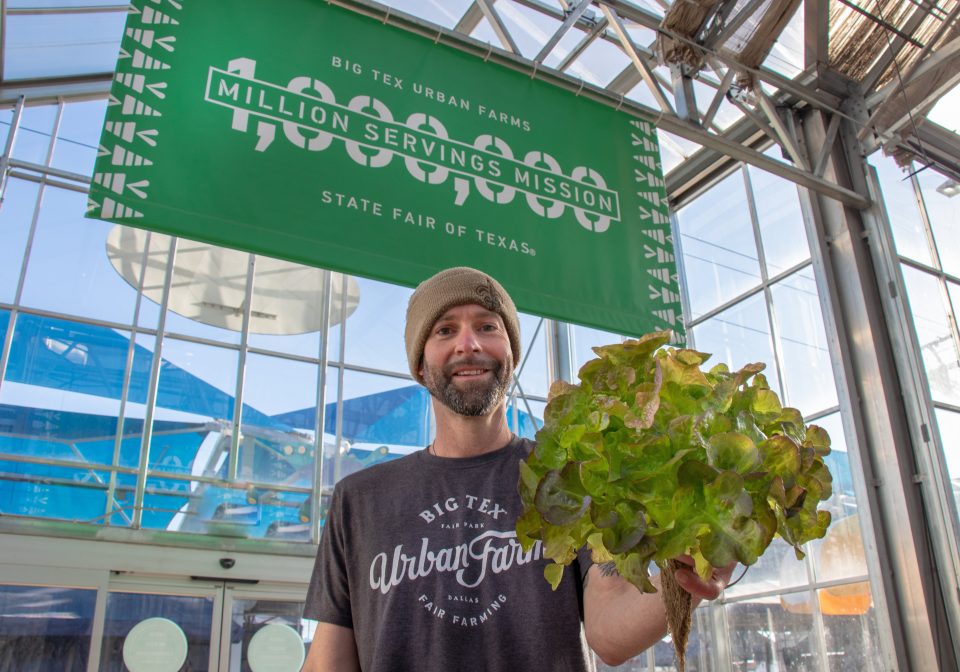 Big Tex Urban Farms has grown substantially since its humble beginnings in 2016. When it first started, it consisted of 100 raised planter boxes in a parking lot near the State Fair of Texas’ administration building, giving out food at a local farmers market on Fridays. Now, it encompasses the entire Errol McKoy Greenhouse on the State Fair of Texas Midway in Fair Park. It’s here where the Farms’ revolutionary mobile hydroponic agriculture systems, including a Nutrient Film Technique system (NFT), grow racks, and a gutter slab system, grow everything from arugula, cucumbers, kohlrabi, micro-greens, peppers, soy, tomatoes, and zucchini.

As part of the State Fair of Texas’ efforts to give back to South Dallas, all the food produced by Big Tex Urban Farms is donated to organizations serving the surrounding communities.

Big Tex Urban Farms has also helped establish dozens of community gardens in the neighborhoods surrounding Fair Park like the garden at Oak Cliff Veggie Project, Cornerstone Baptist, and Texas A&M AgriLife Extension. Another piece of the Farms’ educational programming is working with local culinary programs—donating produce and herbs—that teach job skills to folks from all walks of life.

As a nonprofit organization, your annual visit to the State Fair of Texas – our largest fundraiser of the year – helps fund Big Tex Urban Farms. For more information on the Farms and how to get involved, please visit BigTex.com/BTUF.

Be sure to visit the Errol McKoy Greenhouse on the State Fair of Texas Midway opening Friday, September 30 and running through Sunday, October 23.