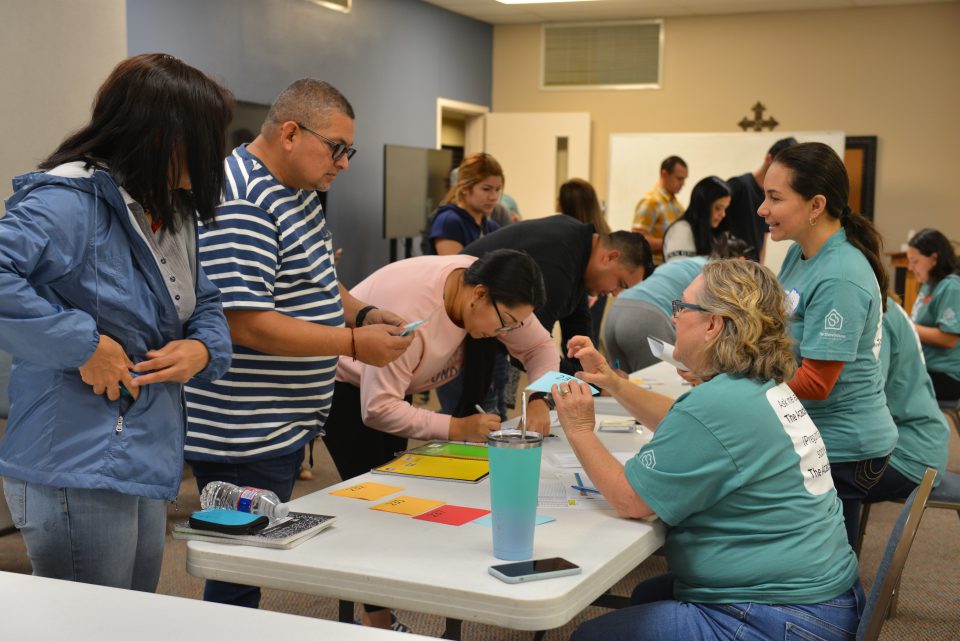 In an ongoing, strategic effort to serve Collin County-area neighbors and create long-term transformation,The Storehouse of Collin County has launched a program called The Academy focusing on the development of language skills, life skills, and job skills for those enrolled. Thirty percent of classes will be offered internally while 70 percent will be offered externally through collaborations with local colleges, trade schools, and other partnerships. The Academy joins three established Storehouse programs: the Seven Loaves Food Pantry, Joseph’s Coat Clothing Closet, and Project Hope.

Fifty-two percent of the students in The Academy’s summer pilot program are immigrants with college degrees or higher but unable to contribute to workforce due to the language barrier.

Working in partnership with Aspire (formerly LIFT and Aberg Center for Literacy), The Storehouse began a 10-week pilot program June 4, offering ESL classes to neighbors each Saturday, through August 13, from 8 a.m. to noon. Class attendees each paid $40 to cover the cost of the textbooks and other course materials.  Scholarships were provided to neighbors who could not cover the costs of the class.  Aspire is a nonprofit educational organization which provides the curriculum, training of instructors, and assessments of students as well as additional support. Seventy-five students, the majority of whom are immigrants from Venezuela, Colombia, Bulgaria, and Brazil, are enrolled in the pilot. Initial assessments, which were conducted for placement of students within five classrooms, indicated that 52 percent have a college degree or higher but are unable to contribute to the workforce due to the language barrier.

According to Linda Johnson, MBA, Ph.D., president and CEO, Aspire, who collaborates with partners across the Dallas area, this is a unique situation. “The majority of ESL students we serve are low literate in their native language. This is a well-educated group and well-disciplined, and we are excited to partner with The Storehouse and watch the students advance and achieve success.”

The idea for The Academy began in 2021 as part of The Storehouse’s monthly neighbor assessments created to help the team not only get to know the neighbors better but also to enable them to make informed decisions for planning services. Thirty-four percent of neighbors surveyed indicated interest in ESL classes.

“We see our neighbors as neighbors and not as refugees, foreigners, or poor people. Everyone in each room is different, but The Storehouse Academy has brought us all together with a common goal.”
Candace Winslow, Executive Director of The Storehouse

The enthusiasm for this new Storehouse program is evident in the smile and the heart of its director, Ligia Urrego, a native of Bogotá, Colombia, who has been a volunteer with The Storehouse for the past 10 years and served as a board member for two years before taking the director role. She first learned about The Storehouse when volunteering with her daughter, Natalie, through the National Charity League. She also volunteered with her son, David, while he was in high school. Her husband, William, also from Bogotá, has been a regular Saturday volunteer for food pantry distribution and is now one of The Academy’s ESL instructors. Natalie also volunteers on Saturdays.

“The response to this program has been overwhelming and emotional for both our neighbors and volunteers,” said Ligia Urrego, director of The Storehouse Academy. “Since day one, our neighbors have expressed how welcome they feel, how touched they are that the team prays for them, and how much this program means to them. They are working hard and are very eager to learn. My husband William told his class that he understands their desire to learn English and the struggles they face. He and I both came to this country from Colombia and did not know English. Knowing this puts his students at ease. The Academy enables us to meet our neighbors right where they are and provide them with critical skills for long-term transformation.”

When Candace Winslow, executive director of The Storehouse, first asked Urrego, a board member at that time, if she would consider becoming director of the program, she was unsure at first, but her love for the neighbors is strong, and her desire to see them finish the courses and speak English proved to be the deciding factor.

“Language is our neighbors’ biggest barrier,” added Urrego. “When my husband and I came to the United States from Colombia, we each began our journeys with ESL classes before we could begin college. We put ourselves on the same level as our neighbors. We know from personal experience that learning English will be transformative for each of them.”

While serving on the board’s vision committee, Ligia began research to see what would be needed to launch a successful program. That is when Urrego discovered a nonprofit called Aspire, providing literacy services and classes to those seeking a better way of life. The organization, which had been providing services online during the pandemic to other partners, was just beginning in person classes once again. After a meeting with Johnson, Urrego and Winslow realized the two nonprofits had strongly aligned values and began to move forward.

“The Storehouse is one of our most important partners. The organization is well respected, has deep relationships with its neighbors, and is expertly run. We look forward to growing this partnership to meet the needs of all neighbors.”
Linda Johnson, MBA, Ph.D., president and CEO, Aspire

“We would love to expand the program and add additional classrooms, but we need additional volunteer teachers as well as monetary donations to meet the overwhelming response,” added Urrego. “Please know that this is such a rewarding experience.”

Following the summer pilot, which concludes on August 13 with a graduation ceremony, the program will officially begin in September. Fall classes include ESL Classes, Forklift and Workplace Safety Certification (which has already filled due to so much interest from the current ESL students); computer classes; Modern Automotive and Repair Certificate and Administrative Professional Certificate, both Collin College collaborations; Navigating the School System; and a Diabetes class and a Blood Pressure class, both offered in collaboration with Golden Cross.

“The Academy is going to change my life,” said Juan Hill, a student in the summer ESL pilot program. “I am not only learning English but making long lasting friendships. The volunteer teachers welcome me with so much love every week and give me all the tools for my learning. The Storehouse cares for me and my family in such a special way, and I will cherish all they do in my heart forever.”

“We live in such a culturally divisive time, and this is a program that unites both men and women with multiple languages from multiple countries including Venezuela, Colombia, Bulgaria, Brazil, and the United States,” added Winslow.

If you are looking for a rewarding volunteer opportunity, we hope you will consider joining our team of instructors and visit our website. With additional volunteers, we will be able to expand the program to more neighbors, who are working hard to change their life trajectories.”

ABOUT THE STOREHOUSE OF COLLIN COUNTY

The Storehouse of Collin County provides short-term assistance and long-term transformation to residents of Collin County in need through the Seven Loaves Food Pantry, Joseph’s Coat Clothing Closet, Project Hope, and The Storehouse Academy. The nonprofit was founded in 2009 under the name of Seven Loaves Community which provided only food pantry staples and grew over the years to meet a variety of needs. Over 3,000 families on average access the Seven Loaves Food Pantry each month. The Storehouse also provides an opportunity to receive clothing at no cost through Joseph’s Coat as well as holistic assessment, counseling, goal setting, and referrals to community resources through the Project Hope relational program. Through the new Academy’s course offerings, neighbors may enroll in free and reduced-cost classes to assist with language, job, or life skills development. Visit www.thestorehousecc.org.

ABOUT THE STOREHOUSE ACADEMY’S LEADERSHIP: LIGIA AND WILLIAM URREGO

Ligia and William Urrego did not meet until they moved to Houston, Texas, from Bogotá, Colombia, to pursue their college educations at the University of Houston. William had a brother who lived in Houston and Ligia, a sister. Ligia received her bachelor’s degree in microbiology and William in hotel and restaurant management. Both began their journeys by taking ESL classes at the University before beginning their coursework.

“Writing during my ESL classes helped me a great deal,” said Ligia Urrego. “In Colombia we did not write papers and essays as is done in the United States. “This process proved to be very beneficial to me as I hope our curriculum at The Academy will be for our neighbors.”

Even after the completion of her ESL course, the first year of school was difficult for Ligia, but she persevered using a tape recorder her father sent to her to record and play back her classes.

“I understand what The Storehouse neighbors are going through, which fuels my desire even more to see them excel in their ESL classes,” added Ligia. “That first year in college, I was having to translate in my head and then take down notes which ended up being in Spanish and in English. Recording the classes helped me to go back and get what I needed, and with perseverance, I was able to graduate in four years.”

Ligia met William during her first year at University of Houston. He was also taking ESL courses, and a friend introduced them. They became friends and dated for a year, then they broke up, but they remained friends taking things for each other back and forth on visits to their families Colombia. One day William, who knew how hard Ligia was studying, asked her if she would like to come over that evening to study and eat Colombian food he was cooking. She enthusiastically accepted, and the rest is history.

While in college, Ligia taught Spanish at a local Montessori school three times a week for two years, which she enjoyed very much. Following graduation, she began a research position working with her genetics professor, decoding DNAs. William worked throughout college beginning as a cook at a new Chili’s, quickly rising through ranks. Today he works as Regional Vice President International Operations, Dine Brands Global, Inc. Urrego also serves on the board of The Storehouse of Collin County.

The couple married in 1994 and had two children, David and Natalie, both of whom are now in college. When William received an offer in the international office at Brinker International, the family moved from Houston to Dallas following a period of commuting. Ligia was introduced to The Storehouse while volunteering with her daughter through the National Charity League. They fell in love with Seven Loaves, and both worked as translators volunteering often. She also volunteered with her son, David. William joined the family volunteering while David was in high school, and the family made a commitment to stay involved and serve together every Thanksgiving.

One year following Thanksgiving distribution, one of their children said, “Even if we don’t celebrate Thanksgiving or Christmas, I’m at my happiest moment because we helped our neighbors,” which touched Ligia’s and William’s hearts. Ligia soon joined The Storehouse’s board of directors serving on the vision committee. During this time Candace Winslow, the executive director, asked her to consider serving as The Academy’s director.

“I felt like it was my calling,” said Ligia. “I will never forget what David said to me. He said, ‘Mom, you need to do it. You love volunteering for The Storehouse, and you have spent so many years giving Natalie and me your love. It’s time to go and give your love to the neighbors.’”

The New 988 Mental Health Hotline: Here’s What to Know