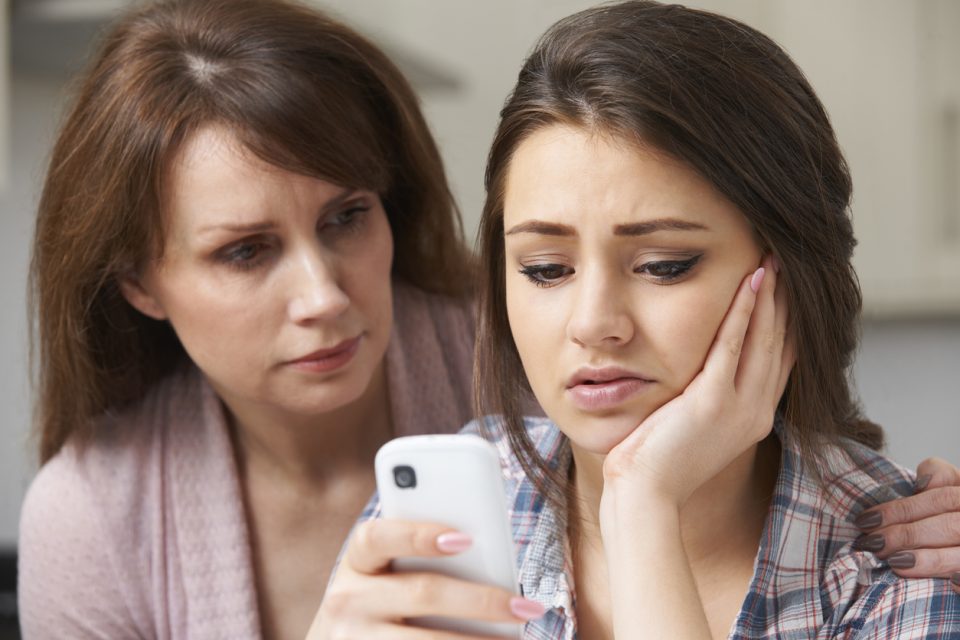 The goal should be to offer your kid at least one place in their life where they feel supported and cared about.
Ruth Carter, Attorney Specializing in Social Media and Internet Law

It wasn’t supposed to happen but it did. Despite your best efforts to the contrary, you discover your kid is the victim of cyberbullying. What do you do?

The first and most important goal should be to block the bully from doing any further harm. As Ruth Carter, a lawyer who specializes in social media and internet law, succinctly puts it, “Cut off the bully’s access to your child.” You can block the bully by reporting the cyberbullying to the site(s) where it has taken place. Many sites have explicit policies (or “terms and conditions”) that forbid any form of bulling and feature a “report abuse” button that you can click.

If you can’t find such a link, look for an email address for the site’s administrator(s) where you can forward a complaint. When a complaint is received, many site administrators will shut down the offensive account and even block the device that was used from accessing the site again. Alternatively, you can close down your kid’s account(s), although, of course, this won’t prevent the bully from tormenting other kids in the future.

Aside from blocking the bully’s ability to reach your kid, collect evidence of the cyberbullying and, if the bully’s real identity is known and he or she is a minor, make the parents or guardians aware of the situation. Make sure to save all evidence electronically and in hard copy, including screen shots of the offending posts. It’s important to have a formal record of what has transpired if the cyberbullying amounts to a criminal offense. This will enable you to share it with the police and lawyers. As Drs. Sameer Hinduja and Justin Patchin of the Cyberbullying Research Center say, “the police should be approached when physical threats are involved, or a crime has possibly been committed.”

You should contact the police if the cyberbullying worsens or the bully’s parents or guardians are unable or unwilling to intervene. Assuming that they’re responsible and caring people who do care, let them know what has happened and how it’s affecting your kid. Akilah Thompson, Founder and CEO of an anti-bullying organization called Generations Inspired, says “it’s important that both parties are aware of the situation and are working towards resolution.” Like you, they might be concerned to learn that their kid has been cyberbullying another kid and may want to put an end to it.

Either way, it’s important that you communicate with them in writing, so that you can document everything should you decide to press charges. It’s also useful to reach out to other parents at your kid’s school to hear if they have had similar experiences, since cyberbullies are often class – or school mates. This would allow you to coordinate your interventions to a greater effect.

Contact your kid’s teachers and guidance counselors. Teachers are likely to know how your kid is doing, not just academically but also socially. Guidance counselors often have an even more intimate picture of who your kid interacts with at school and whether some of those interactions amount to bullying. They’re the ones most likely to be asked to intervene if your kid’s cyberbully also happens to be their real-life class – or school bully. If your kid’s teachers or guidance counselors are unwilling or unable to help, it might be necessary to continue up the chain of command to the school principal, superintendent, and, eventually, the local school board.

Once you’ve done everything in your power to stop the cyberbullying – and report it to the relevant people – it’s time to have a long conversation with your kid. It’s very important that you create a warm and caring atmosphere to have this conversation. The goal, says Mrs. Carter, should be to offer your kid “at least one place in their life where they feel supported and cared about.” Instead of dominating the conversation, or jumping to any premature conclusions, listen carefully to what your kid has to say without interrupting. When kids don’t feel listened to, or get interrupted repeatedly, they tend to go silent or get defensive.

One useful (and non-threatening) way to open up the conversation is to share one or more bullying incidents that happened to you or someone you knew as a child, or to discuss prominent cases that have been in the news recently and may be familiar to your kid. “Most of all,” says Tara Fishler, an expert on mediation and conflict resolution, “commend your child for telling you (if that’s how you found out) and be supportive. Try not to overreact by blaming or punishing the child.”

Give your kid the opportunity to explain, at length and in their own words, what happened, why it might have happened, how it makes them feel, and, not least importantly, what they think should be done to avoid similar situations from happening in the future. Drs. Sameer Hinduja and Justin Patchin, say “it’s appropriate (and important) to solicit the children’s perspective as to what might be done to improve the situation. After all, any sustainable solution to the problem of cyberbullying needs to involve the kids themselves.

Tanni Haas, Ph.D. is a Professor in the Department of Communication Arts, Sciences and Disorders at the City University of New York – Brooklyn College.

How to Protect Your Kids from Cyberbullying

Expert Tips to Better Communication with Your Teen