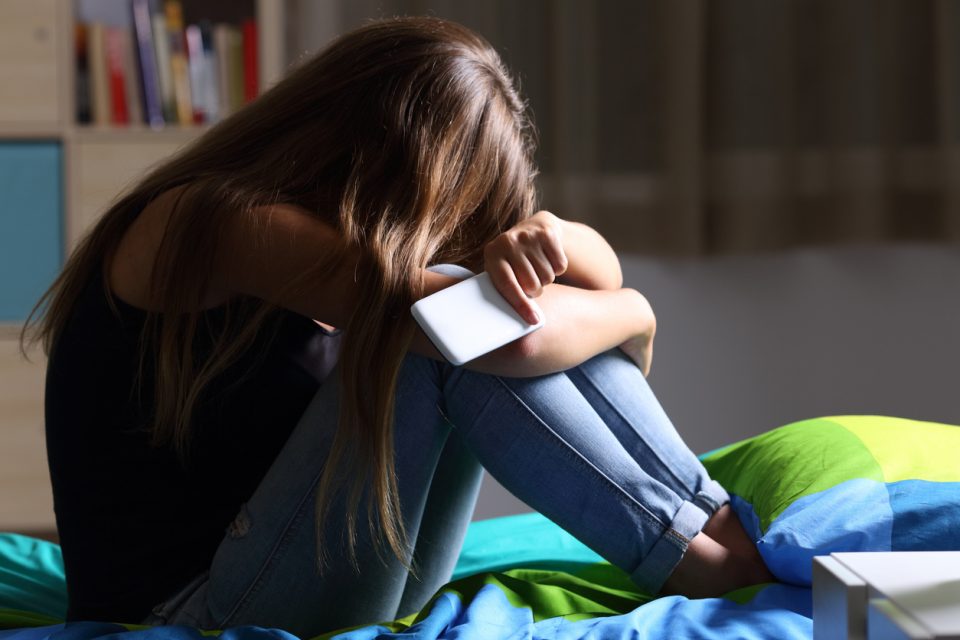 Unlike traditional bullying which often leaves physical marks like bruises or black eyes, cyberbullying can often only be identified by certain changes in a kid’s behavior.

No matter how much and how well you try to protect your kids, there’s always the possibility that they’ll become the victims of cyberbullying. If that’s the case, how do you know if your kids are being cyberbullied? What are the tell-tale warning signs?

It’s important to know the warning signs as only about one in ten kids tell their parents about being cyberbullied. Dr. Michele Borba, an internally-renowned expert on cyberbullying, says “Don’t expect your child will come and tell you about the harassment. Research says that chances are that your child won’t tell which is why you need to tune in closer and get educated.”

Kids often keep silent because they’re ashamed, fear retribution from the bully, and, perhaps most surprising to parents, are afraid that their computer and phone access will be restricted or taken away which, in turn, they see as an unfair punishment of them rather than the bully. Unlike traditional bullying which often leaves physical marks like bruises or black eyes, cyberbullying can often only be identified by certain changes in a kid’s behavior. Cyberbullying can occur right in front of parents, or in the next room, without them realizing it.

According to Drs. Sameer Hinduja and Justin Patchin of the Cyberbullying Research Center, you can tell if your kids might be the victims of cyberbullying by paying close attention to their general demeanor and online behavior. Like victims of traditional bullying, kids who’re cyberbullied often show signs of depression. They exhibit little interest in the things and activities that used to matter to them the most, tend to withdraw from friends and family, experience sudden changes in their eating and sleeping patterns, and complain of headaches and stomachaches. “Moodiness and mood swings are just part of being [a child],” says Walter Meyer, a well-known cyberbullying expert. “But if a child really changes – becomes withdrawn, stops speaking to friends, etc. – the parents should ask what is going on and not be satisfied with ‘nothing’ as an answer.”

Research by the National Crime Prevention Council shows that kids who’re cyberbullied often are fearful about going to school, ask to be driven to school rather than take the school bus, skip school when they can get away with it or request permission to leave school early because they feel sick, have trouble focusing and fall behind in their school work, and may even experience a significant drop in their grades. This is often precipitated by problems with sleeping which make it difficult for them to focus on the school work.

While it’s important to pay close attention to your kids’ general demeanor, pay particularly close attention to their online behavior. Kids who’re cyberbullied tend to be unusually secretive about what they’re doing online, avoiding conversations with their parents about which sites they’re on, who they’re talking to, and the topics of their conversations. If they’re willing to talk to their parents about what they’re doing online at all, they’re likely to get defensive and give vague or dubious-sounding explanations.

Kids who’re cyberbullied often quickly turn off their computers or phones when a parent enters their space, hide, clear or rapidly switch screens, or outright refuse to use their devices unless the parent leaves. They also tend to be unwilling to part with their devices, or share them with their parents, fearing that their parents might find out what’s going on. This is especially true in the evening when friends and cyberbullies are most likely to be online.

When they are online, kids who’re cyberbullied tend to be visibly agitated or jumpy, especially when they receive an IM, text or email from a bully. Their minds are racing with thoughts and emotions as they’re trying to figure out how best to handle the situation without revealing anything to others. They’re also likely to keep checking their computers and phones while going back and forth between different screens in short spurs, say they’re doing homework when they’re really doing something else entirely, and may abruptly shut off or walk away from their devices mid-use for no outwardly apparent reason.

Not surprisingly, kids who’re cyberbullied often appear angry or frustrated after they have been online. Some may suddenly and unexpectedly stop going online at all. Others may go online more than usual, unable to resist the temptation to check whether any new comments have been posted about them. Another possible indication that your kids are the victims of cyberbullying is that they try to cover their “online tracks” such as by erasing their user history folders every time they turn off their devices.

You know your kids better than anyone else. Look for multiple signs that seem to go together; they could be an indication that they are the victims of cyberbullying. “The key,” as Dr. Borba says, “is to look for a pattern in your child. You shouldn’t overlook a sudden change that’s not your child’s ‘normal’ behavior.”

Tanni Haas, Ph.D. is a Professor in the Department of Communication Arts, Sciences and Disorders at the City University of New York – Brooklyn College.

Besides jack-o’-lanterns, pumpkins are popular in recipes, seasonal décor and more

Tips to Help Your Teen Deal with ADHD