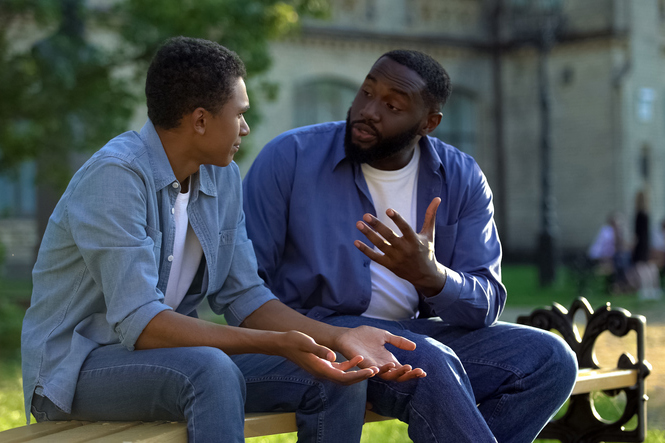 Let’s face it: there’s nothing simple about being the parent of teens. One moment they’re totally happy, and the next moment nothing is right, including anything you say to them! How do you help teens better manage their emotions? Here’s what the experts suggest:

Help Them Understand Their Emotions

When teens experience emotional ups and downs, it’s often because they’re frustrated and don’t understand what they’re feeling. Roy Petitfils, the award-winning author of What Teens Want You to Know and other parenting books, says that parents should help teens name the emotions they’re experiencing by giving them a sheet of paper with a list of common emotions and asking them to check off the ones that apply. “When we’re able to identify and clarify what it is that we’re feeling or experiencing,” Mr. Petitfils says, “we gain a sense of control over it.” Or, put even more succinctly: “Naming it helps in taming it.”

Deborah Dobbs, Executive Director of The Counseling Place in Richardson, Texas says their counselors encourage teens to explore their emotions with curiosity. “For example,” Dobbs says, “Anger is rarely a pure emotion. For younger kids, we explain that mad is usually sad’s bodyguard. Approaching anger with curiosity can help us understand what’s underneath it. Usually, it’s hurt or fear. Then, it’s often easier to understand and manage.”

Validate your teens’ emotions as real and important, and be careful not to minimize their significance. “While you don’t necessarily have to agree that a minor incident is, in fact, the end of the world,” Beth Werrell of Connections Academy says, “it also helps to realize your teen might truly feel that it is.”

If you’re lucky enough that your teens take the initiative to talk to you about an emotional issue, listen to what they say without judgment or suggesting a solution. “Just because your teen is sharing a problem,” Ms. Werrell says, “he or she isn’t necessarily asking you to fix it. Often, teens (and adults) just want to share what’s wrong without being bombarded with solutions.” Child psychologist Dr. Eleanor Mackey says that a better course of action is to ask open-ended questions like, “Wow, how have you been handling that situation?” This will help them to think through tough situations and how to navigate them on their own in the future.

Be A Good Role Model

Be a good role model. As Ms. Werrell puts it, “don’t just tell teens how to deal with troubling emotions – show them.” For example, if you like to go for a run when you’re stressed, don’t suggest that they go running, too. Instead, casually mention that you’re going out for a run to de-stress. Says Dobbs, “Actions indeed speak louder than words. We encourage parents and caregivers to model the behavior they wish to see.”

As parents, we like to think that as long as we talk things through with our kids, everything will be fine. But, as Ms. Werrell notes, “sometimes teens just need a break – from parents, from friends, and from siblings.” If your teens have their own bedrooms, help them make them as comfortable and relaxing as possible – and then let the room be a zone of privacy. If they don’t have their own space, dedicate an area of your home just for them. As Ms. Werrell says, “make sure they have a private space, even just a small section of a room, where they can decompress and gather their thoughts.”

“Relying less on parents and more on peers or self is an important part of adolescent development. When they want space away from you, it’s not personal. It’s natural.”
Deborah Dobbs, Executive Director, The Counseling Place

It’s good for teens to have physical outlets for their emotions. Experts suggest lots of different activities including baking, dancing, exercising, and hiking. It doesn’t really matter which activity your teen chooses; the important point, as Mr. Petitfils says, is that “getting into your body … helps get you out of your head.”  Dobbs concurs, “We’re designed to move and to create things. Outdoors whenever possible.”

Stay Calm at All Times

Stay calm if your teens take out their frustrations by slamming doors, shouting, or both. Don’t condone unreasonable behavior, but don’t escalate a stressful situation any further. As clinical psychologist Dr. Steven Richfield says, “as tempting as it is to return your child’s verbal swordplay with a lashing of your own, don’t. This just escalates the conflict and closes the door to any productive discussion.”

Dobbs suggests one way to remain calm and model healthy behavior is by taking slow deep breaths and walking (not storming) away. “Often, when calm prevails, a teen will circle back to you and share, at least a little bit, what’s really going on.”

If and when that time comes, remember to help them understand their feelings and validate them.

Editor’s Note: Updates to this article were made by the editors of Good Life Family Magazine to include The Counseling Place, a nonprofit organization that provides affordable, professional counseling and educational services in Richardson, Texas.

‘Tis The Season For Family Fun!

Treating Bunions at Their Root Cause with Lapiplasty® 3D Bunion Correction™