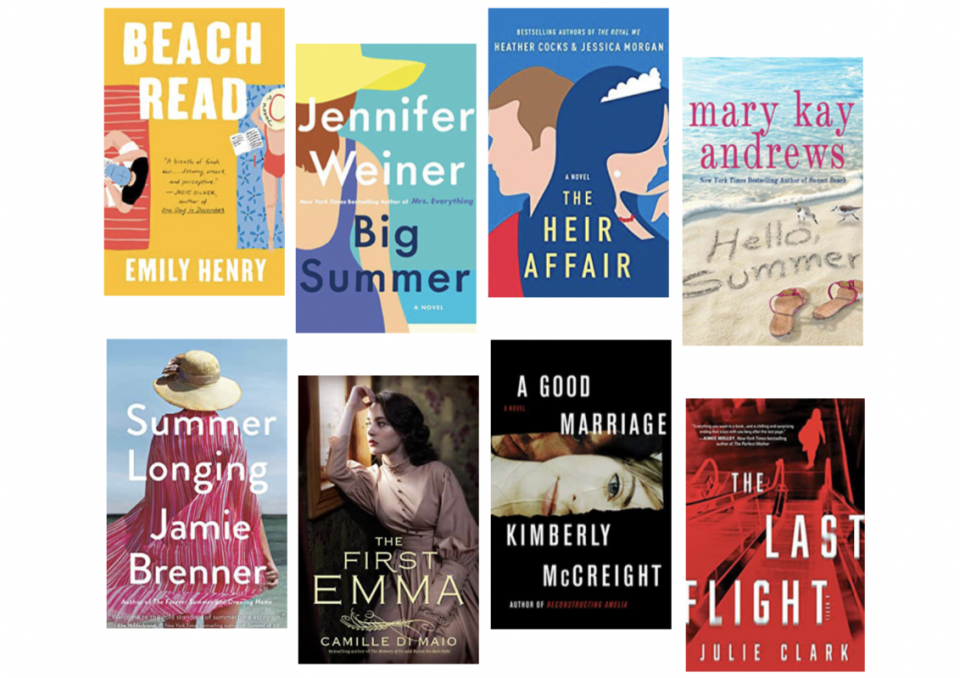 For many of us, there’s nothing quite like getting lost in a good book. Reading can transport us to another world, providing escape from life’s everyday stresses, at least temporarily. Here are my suggestions for new books I hope you will enjoy as much as I did:

Beach Read by Emily Henry A romance writer who no longer believes in love and a literary writer stuck in a rut engage in a summer-long challenge that may just upend everything they believe about happily ever afters. In fact, the only thing they have in common is that for the next three months, they’re living in neighboring beach houses, broke, and bogged down with writer’s block.

Big Summer by Jennifer Weiner This is an unforgettable novel about friendship and forgiveness set during a disastrous wedding on picturesque Cape Cod. A sparkling novel about the complexities of female friendship, the pitfalls of living out loud and online, and the resilience of the human heart, Big Summer is a witty, moving story about family, friendship, and figuring out what matters most.

The Heir Affair by Jessica Morgan and Heather Cocks Making it up the aisle was the easy part: Rebecca “Bex” Porter must survive her own scandals and adjust to royal British life in this highly anticipated follow-up to The Royal We. After a scandalous secret turns their fairy-tale wedding into a nightmare, Rebecca “Bex” Porter and her husband Prince Nicholas are in self-imposed exile. The public is angry. The Queen is even angrier. And the press is salivating.

Hello Summer by Mary Kay Andrews It’s a new season… for small town scandals… and big-time secrets. This might be my favorite book of the season. It isn’t Summer until the new Mary Kay Andrews book comes out. This one ties a small-town family owned newspaper with a political scandal and then morphs into a thriller. Seriously amazing!

Summer Longing by Jamie Brenner When a baby is left on the doorstep of a Cape Cod beach house, an unlikely group of women risks all they hold dear to harbor and protect her. As summer unfolds and friends and family care for the infant, alliances are made, relationships are tested, and secrets are uncovered. But the unconditional love for a child in need just might bring Ruth and the women of Provincetown exactly what they have been longing for themselves.

A HISTORICAL FICTION AND TWO THRILLERS

The First Emma by Camille Di Maio This is the true story of Emma Koehler, whose tycoon husband Otto was killed in a crime-of-the- century murder by one of his two mistresses—both also named Emma—and her unlikely rise as CEO of a brewing empire during Prohibition. When a chance to tell her story to a young teetotaler arises, a tale unfolds of love, war, beer, and the power of women. The story of Hotel Emma in San Antonio.

A Good Marriage by Kimberly McCreight Big Little Lies meets Presumed Innocent in this riveting novel from the New York Times bestselling author of Reconstructing Amelia, in which a woman’s brutal murder reveals the perilous compromises some couples make—and the secrets they keep—in order to stay together. In the end, the protagonist wonders not only whether her own marriage can be saved, but what it means to have a good marriage in the first place.

The Last Flight by Julie Clark Claire Cook has a perfect life. Married to the scion of a political dynasty, with a Manhattan townhouse and a staff of ten, her surroundings are elegant, her days flawlessly choreographed, and her future auspicious. But behind closed doors, nothing is quite as it seems. A chance meeting in an airport bar brings her together with a woman whose circumstances seem equally dire. Together they make a last-minute decision to switch tickets — Claire taking Eva’s flight to Oakland, and Eva traveling to Puerto Rico as Claire. They believe the swap will give each of them the head start they need.