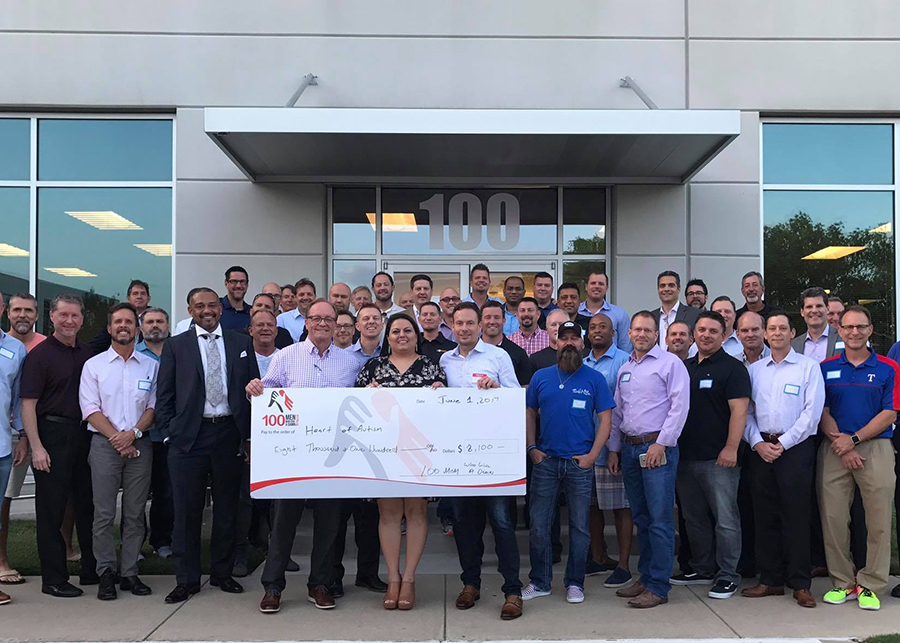 They might not have a charter, or officers, or a vision statement.  They do, however, certainly have a vision—to make an impact in the North Texas community by supporting nonprofits doing great things.  When David Rowe and Steve Wentz came together three years ago to form 100 Men Who Give a Damn in Frisco, they believed that by pulling together a group of like-minded men they could make a difference.  Here’s how the formula works: 100 Men + $100 each +1 Hour = $10,000 for 1 charity and a huge impact on the community.

Steve had been invited to participate in a 100 Men group in Dallas years ago and invited a friend to join him.  His friend leaned over and said, “You know we could do this in Frisco.”  As he thought about it, Steve became even more convinced that he could touch people right where he lives by forming another chapter further north.  It turns out David was thinking the same thing.  The two joined forces, and as they come up on completing their third year, they expect to have donated $150,000 to local charities that touch Collin and Denton counties.

At first, the men “pulled their Rolodexes together,” as Steve says, and started to come up with a list of prospective members.  What they ultimately decided was to invite a smaller group and ask them to invite friends, neighbors, or coworkers they felt would also be inspired to participate.  Their first meeting had over 95 attendees, and it’s been growing ever since.  Former Frisco mayor Mike Simpson attended one event and asked Steve, “How did you get this many people here?”  Steve’s response? “It was easy.” Each quarter, members of the group can recommend a nonprofit, and three are identified to present to the group. After a 45-minute meet and greet/happy hour, the nonprofits have a few minutes to explain what they do.  The presenters leave the room for a few minutes, and the men vote.  The winning charity is announced, and each man writes them a check for $100.  Recipients have included Heart of Autism, Living for Zachary, and the Taylor Hooton Foundation, among many others.

Steve recalls their first meeting in early 2017.  The selected charity, an organization called Best Buddies, which creates opportunities for adults with intellectual and developmental disabilities, received $10,000.  The next day, when David called and asked Steve how he felt it had gone, Steve admitted he couldn’t stop thinking about the two deserving charities that were not selected.  Now, they work to ensure that each of those will receive at least $1000 as well. Oftentimes, the donation doesn’t stop with a check either.  David says, “If you ask me what I’m most inspired by, it would be the members who have not stopped at just writing a check but have also devoted their personal time by volunteering to support the organizations that have presented.”

Steve and David are constantly inspired by what they see and hear from these amazing organizations.  “When you live in a place like Frisco and see the growth, it’s easy not to realize that there are people who have fallen on hard times. Frisco is seemingly booming, but people have real problems and need help.”  Both men remember one especially touching moment.  A young woman from the Boys and Girls Club of Collin County stood up in front of this room full of men and asked them to imagine a young girl who had had her innocence taken away by her stepfather and found refuge in the Boys and Girls Club.  She had gone on to become a teacher.  She ended her speech by saying, “That young girl was me.” There was a palpable change in the room at that moment.

North Texas is blessed to have nonprofits touching lives every day, but it takes money to make it happen.  These 100+ men know they’re contributing to the mission of each organization they support through their generous donations.  They don’t just give a damn; they’re doing something to show it.

Editor’s Note: To learn more about the 100 Men Who Give a Damn in Frisco, visit www.facebook.com/100menfrisco/.