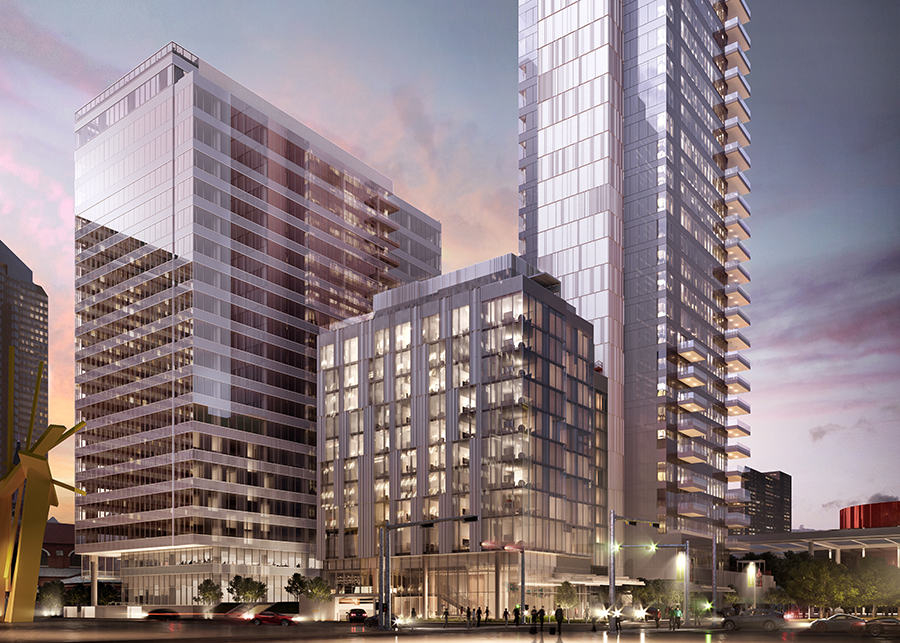 Anyone who has been in the Dallas area very long has seen the dramatic impact the arts have had on the pulse and identity of the city, especially in recent years.  A study in 2017 by Americans for the Arts reported North Texas had become the third-largest arts economy in the nation, trailing only the metropolitan areas of Washington and Philadelphia (though New York and Los Angeles declined to take part in the study) and that North Texas’ arts and culture industry “generates $1.47 billion in economic activity and supports 52,848 jobs annually.” The vibrancy of the Dallas Arts District has been a driving force in that growth, and leading the way in the investment in the area is HALL Group.

It’s no surprise that HALL is building its new hotel and luxury residences on some of the last available lots in the Arts District; after all, the HALL brand has gone hand-in-hand with art since its inception. From its beginning in 1968, HALL Group’s founder, entrepreneur, and philanthropist Craig Hall has ensured that every project with which the company is involved incorporates beautiful works of art, strong aesthetics, and inviting surroundings. “I strongly believe that art, in all its forms, nourishes the human spirit, and as a long-time patron of the arts in Dallas, I cannot think of a better location for this exciting new boutique hotel. I look forward to welcoming guests this fall to experience all that the neighborhood and hotel have to offer,” Craig says.  The art in the hotel was curated by former US Department of State’s Art in Embassies Program Chief Curator, Virginia Shore, and HALL Group’s curator, Patricia Meadows.

HALL Arts Hotel is expected to open in November 2019, and though it will attract visitors from around the world, it is also the perfect place for North Texans to enjoy a staycation.  As the only hotel in the Arts District, guests can enjoy the events and attractions as well as the amenities that abound in the hotel from a state-of-the-art fitness and wellness center to the rooftop pool to the district’s newest restaurant, Ellie’s, named after Craig Hall’s mother. The hotel recently announced Ellie’s executive chef, Eric Dreyer, formerly the executive chef at Fearing’s at the Ritz-Carlton in Dallas and most recently at Oprah Winfrey’s California estate.  Ellie’s is sure to become Dallas’ next culinary destination.

Not long after the hotel’s opening in the fall, HALL is anticipating the opening of HALL Arts Residences in early 2020.  The same meticulous attention to detail will go into the luxury living spaces along with concierge and valet services to cater to each resident.  This will also be the first residential building to register for WELL Building Certification in Texas, a new system for designing buildings that positively impacts the health and well-being of its users.  HALL Group, its architects, and designers have collaborated to obtain WELL Certification by promoting wellness through air, water, nourishment, light, fitness, comfort, and mind. Since Craig and his wife Kathryn will be living in the residences themselves, there is no doubt that there have been no compromises.  Says Craig, “We think people will be truly amazed at the lifestyle HALL Arts Residences offer. We have loved high-rise living over the past several years and look forward to having an address in the heart of our city’s cultural fabric, with neighbors like the Winspear Opera House, the Meyerson Symphony Center, and the Wyly Theater.”

Dallas is lucky to have HALL Group committed to this city because all North Texans benefit.  “Craig Hall and his team have dedicated themselves to investing in the future of the Dallas Arts District, our city’s artistic and cultural center,” said former Dallas Mayor Mike Rawlings. “The HALL Arts Hotel will bring even more visitors, artists, and entertainment to the vibrant district that has put Dallas on the map as an international arts destination.”  If you haven’t been down to the Arts District recently, you should.  Now that you can stay at a beautiful new hotel right in the heart of it, you’ve got a perfect excuse to go.   hallartshotel.com