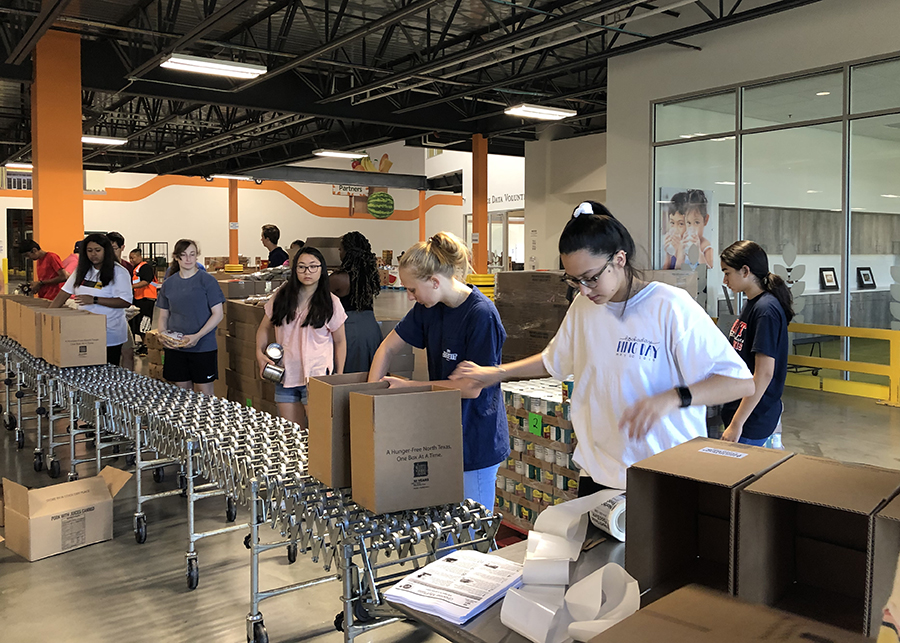 Size matters.  Walking around the new North Texas Food Bank in Plano (ntfb.org) is an experience in wide open space.  Several volunteer groups are working on projects in one huge space, sorting and packing, adjoined to warehouses as big as city blocks.  A walk through this airy, bright space is an education in the enormity of the hunger problem in North Texas.

My guide is Erica Yeager, Chief External Affairs Officer for the North Texas Food Bank (NTFB).  She explained that NTFB is a food bank that supplies food, organizational support, education, and advocacy to the food pantries across 13 North Texas counties, who in turn distribute directly to their communities.

From this new building—now situated right in the middle of the 13-county area—NTFB provides access to almost 77 million nutritious meals this year through its distribution network of 200+ partner agencies. NTFB’s ambitious goal of 92 million meals annually by 2025 is within reach.

The North Texas Food Bank was started in 1982 by founders Jo Curtis, Kathryn Hall, Lorraine Griffin Kircher, and Liz Minyard.  The first year, these women distributed 400,000 pounds of surplus food and grocery items through a network of charitable organizations across several counties.  Erica notes that, ironically, these women thought they were addressing a “temporary issue,” only to find hunger has not only persisted, but grown exponentially.

The North Texas Food Bank is a member of the Feeding America Food Bank Network, the largest domestic hunger relief organization.  The national organization solicits donations and partnerships with national grocery companies and distributes to more than 200 food banks including NTFB, who supplements and distributes to local organizations.  As the size of the hunger problem has mounted over the years, so has the need to expand and organize the process so that the NTFB can best help communities thrive.

Efficiency is found in every spacious inch of the building: from drop points to sorting, packing, storing, and outbound transit, each step is carefully monitored.  Area grocery retailers donate food, both fresh and processed.  Other sources of food donations include farmers, USDA, manufacturers, and canned food drives. Once delivered to NTFB, it is sorted, kits packed by volunteers into specific packaging for certain groups, stored in warehouses of varying temperatures, loaded on trucks, and distributed to sites in 13 counties.  Nothing is unaccounted for.  Very little food is lost due to spoilage.

Efficiency and achievement have earned the North Texas Food Bank numerous awards and a 4-Star rating with Charity Navigator.  94% of each $1.00 donated to NTFB goes directly to hunger relief programs.

As we walk through the warehouses, Erica points to a large bin full of pop tarts and pastries.  “All donated food is distributed—even processed food and sweets. Each $1.00 provides 3 nutritious meals:  processed foods are not part of this calculation.”  The focus has always been on the importance of nutrition.  Each day, NTFB provides 190,000 nutritious meals for hungry children, senior citizens, and families.

Collaboration with other organizations and volunteers are both keys to NTFB’s success:  The warehouse is staffed daily by multiple volunteer groups, including older adults, community organizations, corporate volunteers, and school children, working together assembling meal packages, including disaster relief kits through a program developed with the Salvation Army, Volunteer Now, and the Red Cross.

NTFB supports community gardens and nutrition education.  There is a working garden immediately outside the NTFB building – “Jan’s Garden,” named for former CEO Jan Pruitt, who guided the NTFB for many years and is credited with growing NTFB into one of the best-known and regarded non-profit entities in Texas.

Planning for future needs, Erica is spearheading an endowment initiative.  “This initiative is important because of the fluctuations in demand caused by federal government shutdowns, weather-related shortages, and changes in government funding.  A financial safety net to cover the peak demand periods is important so there is no interruption in services.”

Food insecurity has historically been greatest within the most vulnerable groups:  children and the elderly.  Families have become a focus as financial distress can disrupt the entire family unit.  Programs to feed low-income senior citizens and at-risk children were among the first initiatives and have been expanded over time.  “Food 4 Kids” program, for example, started in 2004 and provides weekend food for kids who are at risk for being chronically hungry.  Some initiatives are less formal: “Teachers are aware of which students arrive in class hungry. A snack bar can be quietly placed in a child’s backpack,” says Erica.

“Delivering food to the rural areas turns into an improvised Farmers Market:  there are usually lots of people waiting for the truck to arrive.  Fresh produce and other food are unloaded and distributed.  People gather and get to know each other in the process.  Our trucks create community,” Erica says.

NTFB has most recently focused on the hunger issue within teen and college-age populations.  Recent data reveals that “in Collin County alone, 20% of kids are food insecure and 18,000 of them are teenagers.”  The teen audience is difficult to measure because they are still living within a family unit and are more likely to disclose personal issues to peers than to adults.  Recently, the students of John Paul II High School’s Social Innovation Lab (SIL) interviewed teens within Dallas and Collin Counties who are affected by food insecurity to learn how best to address the problem.  Teens speaking to teens produces better insight into sensitive topics.  As a result of the students’ findings, two prototypes have been developed which are in test-market phase now.  These SIL students are one of only four schools to be invited to present their findings and prototypes at the Global Conference in Rome in November 2019.

NTFB sponsors the Youth Advocate Council, comprised of area high school students who are interested in finding out about the hunger issue, volunteering their time, and learning how to advocate for food security among their peers and across the wider community.  For more information and the application for this program, visit ntfb.org.

The NTFB’s mission is “to close the hunger gap in North Texas by providing nutritious food.”   They believe “nourished people create communities that flourish and thrive.”   Size matters:  the hunger problem is huge, growing, and critically important—it crosses all demographic groups and directly connects with so many other community issues:  health, housing, poverty, job loss.

Tri Delta Bakes up a Winter Wonderland of Cookies & Castles™