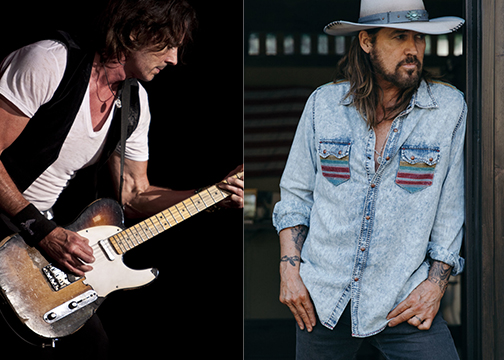 The State Fair of Texas is excited to announce its confirmed list of 2019 FREE headlining concerts on the Chevrolet Main Stage. Featuring a wide variety of musical acts across all genres, the Chevrolet Main Stage hosts the Fair’s lineup of nationally recognized headliners, in addition to the many venues throughout the fairgrounds that offer 24 days of FREE concerts, included with State Fair admission.

The concert series kicks off on Opening Day at 8:30 p.m. with 80’s power-pop icon Rick Springfield. Springfield is also the first “Flashback Friday” act, where the stage will offer fairgoers a musical blast from the past every Friday of the Fair. Over the past four decades, Rick Springfield has worn many hats as an entertainer and performer, earning accolades as a Grammy-winning singer, songwriter, and musician. He is the creator of some of the generation’s most iconic songs, which have sold a combined 25 million albums and scored 17 U.S. Top 40 hits, including “Jessie’s Girl,” “Don’t Talk to Strangers,” and “An Affair of the Heart.”

Taking the stage on Saturday, September 28 at 8:30 p.m. is CAMEO, the soul-influenced funk group that has been keeping it “funky” for more than 40 years. Founded and produced by the group’s current lead singer Larry Blackmon, CAMEO’s 17 albums have made multiple appearances on the charts, including the Billboard Top Ten and Black Music charts, along with a Grammy nomination for their break-through album “Word Up.” The band also made headlines after winning two awards for “Best Single/Group” and “Album of the Year” at the first ever Soul Train Music Awards in 1987.

Opening Weekend concludes on Sunday, September 29 at 5:30 p.m., with a performance by the chart-topping Latin band, La Maquinaria Norteña. The group’s signature sound mixes modern and contemporary elements rooted in the northern music style of “Chihuahua,” which highlights the saxophone and accordion. The band’s journey to the top has placed them on both the iTunes and Billboard music charts from 2013 to 2015. With its rising career, La Maquinaria Norteña’s invaluable contribution to the world of music, professionalism, dedication, and commitment have been immortalized in the so-called Paseo de Las Estrellas in Las Vegas.

Hotel California continues the “Flashback Friday” lineup on Friday, October 4 at 8:30 p.m. with a salute to the Eagles. Named after one of their most popular songs, Hotel California is known as the only show with official authorization to perform the Eagles’ catalog of Music. Join them on a trip down a dark desert highway, complete with authentic instrumentation and world class acapella, and watch as the performance closes with a show-stopping rendition of the “Star-Spangled Banner.” This legendary Southern California group is as unique as it is powerful.

Taking the stage on Saturday, October 5 at 8:30 p.m. is rock and roll torchbearer Daughtry. As the front man for the band bearing his name, he has released four albums throughout his music career, all of which have reached the Billboard Top Ten and have a combined sale of more than eight million copies in the U.S. Daughtry’s self-titled debut was the best-selling album of 2007, which contained four top twenty hit singles including the Grammy-nominated smash “It’s Not Over.” In addition to his own work, Daughtry has also seen collaborations with artists such as Timbaland, Vince Gill, and Carlos Santana.

Gospel Night on the Chevrolet Main Stage welcomes Grammy award-winning gospel singer Tye Tribbet to close out the second weekend on Sunday, October 6 at 5:30 pm. With one of the most relevant voices of this generation, his sound creates a dynamic new caliber of music that can not be classified by as one genre. Tribbet is often heralded as the “Elvis of Gospel,” as his work has earned two Grammy awards for “Best Gospel Song” and “Best Gospel Album,” along with one Soul Train award for “Best Gospel/Inspirational Performance.” You may have also caught one of his performances on BET with the likes of Snoop Dogg or on “The Tonight Show Starring Jimmy Fallon.”

The concert series continues Friday, October 11 at 8:30 p.m. with Austin-based singer-songwriter Bob Schneider. Born in Michigan and raised in Germany, the artist’s roots are what formed his career into who he is today. He grew up studying piano and guitar, then on to study art before moving to Austin, where he established himself as a musician. Since his debut album Lonely Island was released in 2001, Bob Schneider has grown to be one of the biggest acts in Austin, winning more Austin Music Awards than any other musician including “Best Songwriter,” “Best Musician,” and “Best Male Vocals.”

Saddling up to take the stage after the Red River Showdown game on Saturday, October 12 at 8:30 p.m. are country legends Big & Rich featuring Cowboy Troy. A band, a brand, a bond and a brotherhood: Big Kenny Alphin and John Rich – Big & Rich – have blazed an indelible mark on modern country music, not simply by breaking the rules, but by setting them on fire. Big & Rich have captivated a multi-generational community of listeners with their sterling songcraft and recorded performances. After their debut hit in 2004, “Save a Horse, Ride a Cowboy,” the duo went on to garner multiple Grammy, ACM, CMA, and CMT Music Award nominations.

Prepare your “Achy Breaky Heart” because country music legend Billy Ray Cyrus will perform for the masses on Sunday, October 13 at 8:30 p.m. Starting his career off in 1992, Cyrus’ first album “Some Gave All” debuted on the Billboard charts at number one and would stay there for 17 weeks. His first single release, a simple two-chord song with one verse and chorus called “Achy Breaky Heart,” turned into a worldwide phenomenon that topped charts around the globe and made a superstar out of a boy from Flatwoods. The multi-million selling country single helped launch the 90’s line dance craze and was undoubtedly one of the catchiest, polarizing, history-making songs in the entire country music genre. He has since dabbled in other music genres, including his most recent viral hit with rapper Lil Nas X, “Old Town Road.”

Columbus Day on the Chevrolet Main Stage will host a passionate show by Shane & Shane on Monday, October 14 at 5:30 p.m. A Texas-based contemporary worship band, Shane & Shane is known for their celebrated guitar work and trademark harmonies most often showcased through acoustics and contemporary praise music. They released their first album in 2002 and continued to release a total of 10 albums, with their most popular being “The One You Need,” which reached number 53 on the Billboard 200 chart. In addition to their music, the band launched “The Worship Initiative” in 2014, which is a membership website offering instructional videos and chord charts for well-known worship songs.

The final act in the “Flashback Friday” series and the first of Closing weekend, Shining Star will bring an earth-shattering tribute to Earth, Wind, & Fire on Friday, October 18 at 8:30 p.m. The band consists of eleven highly-talented vocalists and musicians, who harmoniously join together to present their music. This amazing recreation show is based on the 1970’s thru 1980’s the peak time of Earth, Wind & Fire’s magical career. The tribute playlist has also been hailed as the definitive collection of their chart-topping hits. Fans will leave this musical and visual extravaganza feeling as though they have been entertained by one of the most well-known R&B pop bands ever, Earth, Wind, & Fire.

The 2019 concert series concludes on Sunday, October 20 at 3:00 p.m. with musical entertainment by Gary P. Nunn. Establishing himself as an icon of Lone Star music for more than 40 years, Nunn is a founding father of the progressive country movement out of Austin in the 1970s that changed the face of popular music. In addition to the many gold albums on which he has played and/or written and published songs, Nunn has earned several notable awards and honors over the years. He was named an Official Ambassador to the World by Texas Governor Mark White, and years later Governor Rick Perry also declared him an Ambassador of Texas Music. In 2004, he was also inducted into the Texas Hall of Fame.

The Chevrolet Main Stage is an outdoor venue with a huge, festival-type stage and experience, as well as an ADA-compliant area for guests needing special assistance. The stage showcases national and regional talent of all types, with all performances included in the price of admission. Regional acts for the State Fair of Texas Chevrolet Main Stage will be announced later this summer. 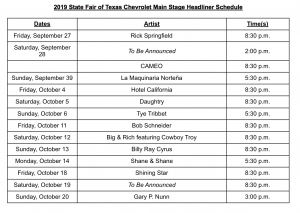 In addition to the Chevrolet Main Stage, the State Fair of Texas offers FREE daily live music performances by local and regional acts on four other stages throughout the grounds – the Bud Light Stage, Midway Stage, Dr Pepper Stage, and Wine Garden Sound Stage. Local and regional acts for these stages will be announced later this summer.

Mark your calendars for the 2019 State Fair of Texas, themed “Celebrating Texas Creativity.” The Fair invites you to join the fun and attend this year’s event, running Friday, September 27 through Sunday, October 20.