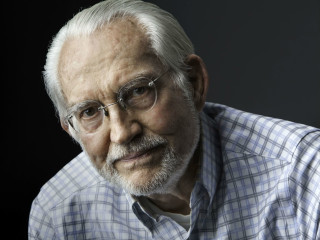 Dallasite, Leonard Volk, gave a lecture about his family’s history in Dallas at the Dallas Historical Society’s “An Evening With!” program. Over 100 people came to Hall Of State on the evening of Tuesday, April 16, to hear about Leonard Volk’s family and the Volk Brother department stores. His daughter, Alison Volk, moderated the talk. Immediately following the discussion, a meet and greet reception occurred, which included a signing of his book of photography and essays. Guests also enjoyed viewing items from the Dallas Historical Society’s Volk Collection.

Mr. Volk’s interesting family history began when George and Leonard Volk came to Dallas From Baltimore, George in 1887 and Leonard in 1889. Leonard went to work in a shoe store on Elm Street in 1889, bought the store in 1890, and began Volk Brothers Company in 1890, with George as its 1st president. Volk Brothers Company grew to have eight Dallas stores in its 80 year history. The subdivision popularly known as Volk Estates in University Park, was bought by his grandfather. Created and sold by his son, Harold, Volk Estates now has some of the most expensive real estate in Dallas.

Volk recalled memories of growing up in Dallas and how it has changed during his 91 years, his career in architecture and his volunteer community service career making a difference in our Dallas community. For example, in 1966, at the Salado conference of Goals for Dallas, he wrote the goal for four of the twelve goals areas, including Design of the City, Transportation, Cultural Affairs, and Housing. He also told remembrances of his father, Harold, and his extraordinary career in retail business and the military. His military career began with ROTC at Yale. He left before graduation in 1917 for active duty in the Army, attended the First Officers Training Camp in Leon Springs, TX, then in 1918 served as an artillery officer with the 90th Division in France. During World War II, he again served his country. As President of the National Shoe Retailers Association, he planned shoe rationing, announced it to the nation on the radio. He then served as a civilian in the OSS in Britain and France, organizing and leading a Psychological Warfare unit in the liberated towns from Normandy to Bordeaux after breakout from the Normandy invasion perimeter. After the war, he participated in meetings that helped OSS become the CIA.

Leonard Volk then discussed attending Texas Country Day School in Dallas (now St. Mark’s), graduating from Andover in 1945, and from Yale in 1949. He travelled in Europe for 14 months in 1949-50. From 1952 to 1955 Volk served in the U.S. Army’s Counter Intelligence Corps, stationed in Germany for two years. Returning to the U.S., he studied Architecture at MIT and received his degree in 1959. He practiced architecture in Dallas from 1959 to 1989, much of the time as a principal of Selzer Associates, Architects. His design projects included low and high-rise apartments, attached houses, a medical clinic and medical offices, subdivision plans, office buildings, a hangar and industrial building for Texas Instruments, commercial remodeling at Highland Park Village in Dallas and Rideglea Village in Fort Worth, staff housing at McDonald Observatory for the University of Texas, and public housing modernization in West Dallas. He pursued a volunteer career in Dallas from 1959 to 1995, working on such activities as Goals For Dallas, organizing a Community Design Center improvement, and leading the Dallas AIA’s Affordable Housing Committee. A slideshow of Volk’s impressive photography of Dallas Landmarks and Fair Park accompanied the talk.

“An Evening With!” is supported in part by the City of Dallas Office of Cultural Affairs.

About Dallas Historical Society
The Dallas Historical Society collects, preserves, and exhibits the unique heritage of Dallas and Texas to educate and inspire future generations. Founded in 1922, it is the oldest historical organization in Dallas County. Since 1938, the Society has been steward of the Hall of State; a historical Texas Landmark builty in 1936 for the Texas Centennial, located in Fair Park, as well as a collection of artifacts and archives from both Dallas and Texas in excess of 3 million pieces. This vast collection serves as the backdrop for year-round temporary exhibits and an archival research center in addition to public educational programs. For more information visit www.dallashistory.com