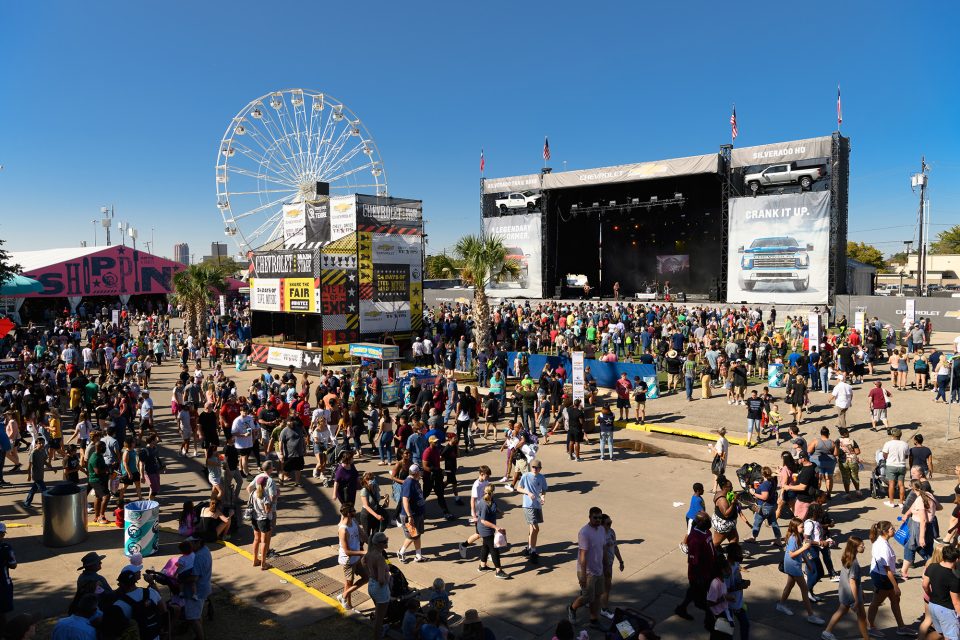 State Fair of Texas announced the FREE music lineup for this year’s Fair. Fairgoers can experience all different kinds of live music – country to R&B, Norteño to electro-pop – across the fairgrounds during all 24 days of the 2022 State Fair of Texas, all included with their admission ticket. And, seeing as the Fair is all about celebrating all things Texan, of the more than 90 performers this year, 74 artists featured across the three live music stages, including four headlining acts, hail from the Lone Star State.

On Sunday, October 2, join us to take in the norteño sounds of La Fiera de Ojinaga, starting at 8:30 p.m. Combining the best components of norteño with saxophone, La Fiera de Ojinaga released their debut album in 2013 and were one of the first groups to release their music digitally. The song “Imposible y Prohibido” has become one of the most viewed videos on the official Azteca Music Group channel on YouTube.

Returning to the Main Stage this year, the Chris Pérez Band will rock fairgoers on October 4 at 8:30 p.m. Formed by Grammy award-winning guitarist, songwriter, and best-selling author, Chris Pérez, the group is a Latin rock band infused with English and Spanish roots. Winning a Grammy for their album, “Resurrection,” Pérez dedicated his crossover hit song, “Best I Can”, to his wife, the late Latin superstar, Selena, who performed at the Fair in 1994.

Don’t miss the ultimate tribute to Elvis Presley in concert, starring international award-winning artist Kraig Parker, with the Royal Tribute Band and Orchestra on Wednesday, October 5 at 5:30 and 8:30 p.m. For more than 20 years, Kraig has sold out venues worldwide, leaving audiences “all shook up” and screaming for more. Experience the electrifying music, presence, and voice of the King by one of the best in the business.

What fun is an artist unveiling without a little mystery? Follow the Fair on social media and sign up to be a Big Tex Insider at BigTex.com/Insider to be the first to know who is the special mystery guest that will be taking the stage on October 6 at 5:30 and 8:30 p.m.

Dust the red dirt off your boots for the Vandoliers, bringing their signature mix of red dirt country, rock, and Tejano to the Main Stage on October 7, playing at 5:30 and 8:30 p.m. Hailing from Texas, the group started recording in 2015, releasing three albums and spending more than half of their year on the road, touring the country.

Texas-born duo Jamestown Revival takes the stage on Saturday, October 8 at 8:30 p.m. Childhood friends turned folk duo, Zach Chance and Jonathan Clay released their debut album, Utah, in 2014. Since their debut, they have been featured in Rolling Stone magazine, the Wall Street Journal, and performed at major festivals across the country, including South by Southwest, Coachella, and Austin City Limits. Their new album, Young Man, was recorded in Fort Worth and debuted at #22 on the American iTunes Chart.

Taking the stage on October 9, Lucinda Williams will showcase her blues sound at 8:30 p.m. Known for her poetic singer-songwriter style, Lucinda rose to prominence in the late 70s with a strong foundation in blues. Her1998 album, “Car Wheels on a Gravel Road”, was a seminal work that helped her pave her own path in the music industry. With more than 14 albums under her belt and more than 40 years in the music-making industry, Lucinda is continuing to make music, releasing her new album, “Good Souls, Better Angels” in 2021.

Get ready to groove on Monday, October 10 with Le Freak, with two showtimes at 3:00 p.m. and 5:30 p.m. A tribute act that puts the fun in funk, Le Freak thrills fans with their covers of 70s and 80s disco hits. Fully outfitted in their retro gear, “The Greatest Disco Band in the World” adds new energy to songs of the past.

Red dirt icons Jason Boland & The Stragglers play at the Chevy Main Stage on October 14 at 8:30 p.m. For more than 20 years, Jason Boland & The Stragglers have toured the world as leading ambassadors for red dirt music, a genre that highlights Texas/Oklahoma country music. Ten albums into their career with more than 500,000 records sold, they have played for tiny honky-tonks to massive outside venues and everywhere in between. His hit, “Somewhere Down in Texas” has surpassed 13 million streams on Spotify.

It’s more than just a dream – Fitz & The Tantrums will light up the Chevy Main Stage on October 15 at 8:30 p.m. Their major label debut, “MORE THAN JUST A DREAM,” featured back-to-back Platinum-certified #1 Alternative Radio singles with “The Walker” and “Out of My League”. Although you may have seen the group perform on ABC’s “Good Morning America, NBC’s “TODAY”, and more national shows, the band’s infectiously energetic indie-pop will grace the fairgrounds for the first time this year.

We’ll all be more than alright on October 16, when Night Ranger rocks the stage, starting at 8:30 p.m. Formed in 1979, Night Ranger gained popularity in the 1980s with their hard rock sound. Best known for “Sister Christian,” which peaked at number five on the Billboard Hot 100, the band has sold more than 17 million albums worldwide.

Girl Named Tom hits the stage on Friday, October 21 at 8:30 p.m. A sibling trio, Girl Named Tom was established in 2019, with all three siblings harmonizing to a variety of material – acoustic pop, singer-songwriter, and more. Before the pandemic, the group played 67 shows in 27 cities. In 2021, the group competed and won NBC’s singing talent competition show, “The Voice,” making history as the first trio to win.

Join us for a throwback to the 1980s with Resurrection: A Journey Tribute on October 22, performing at 5:30 and 8:30 p.m. This tribute act sets out to recreate the experience of a Journey concert during the 1980s. Performing everywhere from AT&T Park, home of the San Francisco Giants, to Royal Caribbean International cruises, this act takes you down memory lane featuring iconic music from one of the most popular rock bands to date.

Closing this year’s Chevrolet Main Stage headliner lineup strong, La Mafia closes out the Fair on October 23 at 3:00 p.m. With its roots in the Northside neighborhood of Houston, La Mafia is known worldwide for its pop grupero style, which is a style that combines the influences of Spanish music with English rock and pop music. The group has won five Grammy awards, winning Best Mexican-American/Tejano Music Performance two years in a row in 1997 and 1998.

In addition to the Chevrolet Main Stage, live music can be found across the grounds. The Bud Light Stage, located centrally in Cotton Bowl Plaza, will showcase local and regional talent all 24 days of the Fair, just steps away from all your fried food favorites. Notable acts include Joshua Ray Walker on Opening Day, September 30, fresh from an appearance on “The Tonight Show with Jimmy Fallon.” The first and only all-female mariachi band, Mariachi Rosas Divinasshowcase their heartfelt style of mariachi on Sunday, October 2.  Bree & The Fellas, a Dallas-based jazz and R&B group who will bring their smooth groove to the stage on October 21.

The Yuengling Stage, located outside the Go Texan Pavilion, will feature a Friday night comedy series, titled “Deep Fried Comedy,” along with live music throughout the week. Get ready to groove with Texan EJ Mathews on October 1. Take a trip back to early Nashville with Simon Flory on October 8. Having played together for more than 10 years, Dallas Asian Strings will serenade fairgoers with their extensive repertoire on October 12, and Claire Morales will rock the stage on October 22.

See below for the full schedule of live music that will be playing throughout the grounds at the Fair. Join us at the most Texan place on Earth for the 2022 State Fair of Texas, running Friday, September 30 through October 23. Season passes are now on sale at BigTex.com/Tickets. More information on ticketing for the 2022 Fair will be available in the coming months as we approach Opening Day.

Creating Memories – One Letter at a Time

Countdown to College: Tips to Help Students Find Their Fit