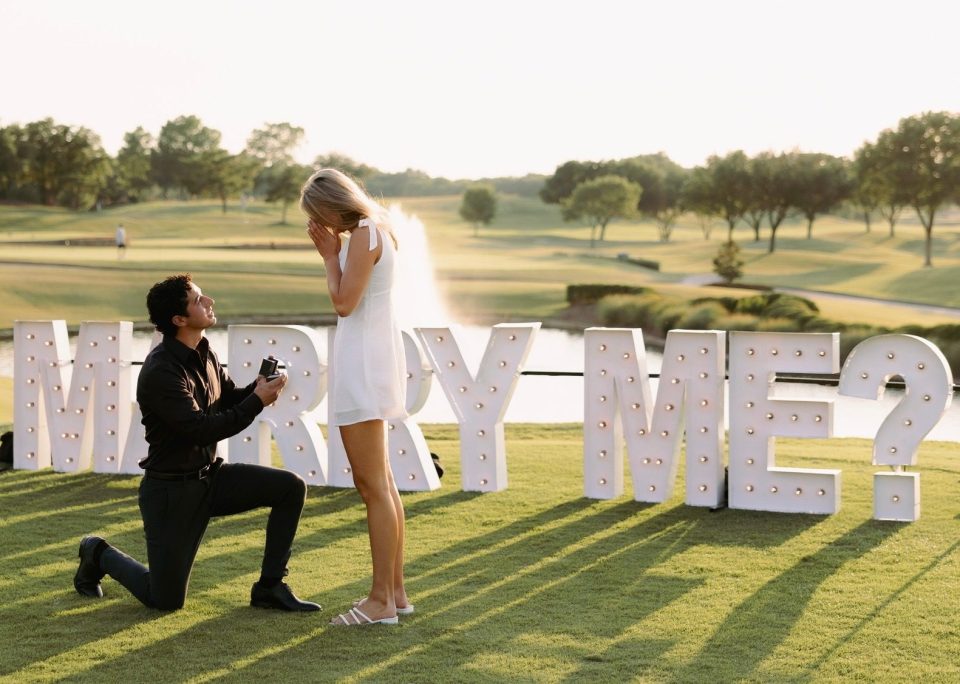 The great poet Emily Dickinson once said, “I know nothing in the world that has as much power as a word. Sometimes I write one, and I look at it until it begins to shine.”  For Mackenzie Skipper and her team at Alpha-Lit Marquee Letters, this is a sentiment they take quite literally.

The company provides lighted letters to spell personalized messages for any event or special celebration, and they’ve heard time and time again that the letters make a real impact.

The idea began when Mackenzie and her now-husband Dan Skipper were planning their own wedding in 2017.  She got the inspiration to use lighted letters from Pinterest posts but couldn’t find anywhere that provided them. She eventually found a reasonable substitute with some wooden letters from a provider over 200 miles away and had the words “MAC” (short for Mackenzie) and “DAN” at her reception. They were a huge hit.  The guests loved them, and everyone wanted to take photos with the signs.  “We were in the getaway car, and I turned to my husband and said, ‘I’ve been thinking about a marquee letter company,” Mackenzie shares.

It took a couple of years to bring that vision to life.  At the time Dan was going through the NFL draft – he is currently an offensive tackle for the Detroit Lions – and Mackenzie was supporting his dreams.  After a while, however, she knew she needed something else to be fulfilled. She shares, “It seemed like all anyone asked me about was football; I wanted someone to ask about what I was doing.”  She found a manufacturer in the U.S., and encouraged by Dan, started Alpha-Lit.  “I thought it would be a hobby for me,” Mackenzie says, “but it blew up.”  It took only twelve weeks to pay back that initial investment, and now there are 146 Alpha-Lit licensed operators in the U.S. and Canada. The success of the company was “so good for my confidence,” she believes.

The company started in 2019, so, like so many others, at the beginning of the COVID pandemic they took a huge hit when those life events had to be put on hold. Mackenzie had all these new licensed owners and she says, “All these locations were looking at me asking ‘What do we do?’”  Soon, however, based on the response of one owner, the team began promoting outdoor pick-ups of the letters, especially for all those drive-by parties and baby showers people began having during quarantine. After six weeks or so, the company had rebounded.  “We showed them how they could celebrate in a unique way,” Mackenzie says.

The marquee letters can be used for almost any celebration or event.

From company names to sports teams, wedding receptions to sorority parties, baby showers to birthdays, there is no better way to personalize a space. Mackenzie says that for her, “… my favorite events are the proposals.”  She’s seen grooms-to-be get very creative.  But for her personally, “It was so special to me to use my business for my gender reveal” for her and Dan’s now one-year-old twins.

“My business was my first baby,” she says, but now her priority is those precious boys.  “Once your kids get here your whole life changes,” Mackenzie acknowledges.  Being a mom has helped her realize that she has to give up some of the control in order to focus on both business and family. “I think mainly it made me realize how learning to ask for help and hiring good employees was key.”

Alpha-Lit says they’re always ready to “light up your next event,” and now with locations coast to coast most anyone looking to personalize their space won’t run into the problem Mackenzie and Dan did when planning their wedding just five years ago.  The business is thriving, Mackenzie and her family are thriving, but most of all, she loves knowing they’re helping create moments for their customers during life’s biggest celebrations.

For more information, go to: https://www.alphalitletters.com

4 Steps to Live in the Present Every Day

9 Tips to Save on Holiday Shopping