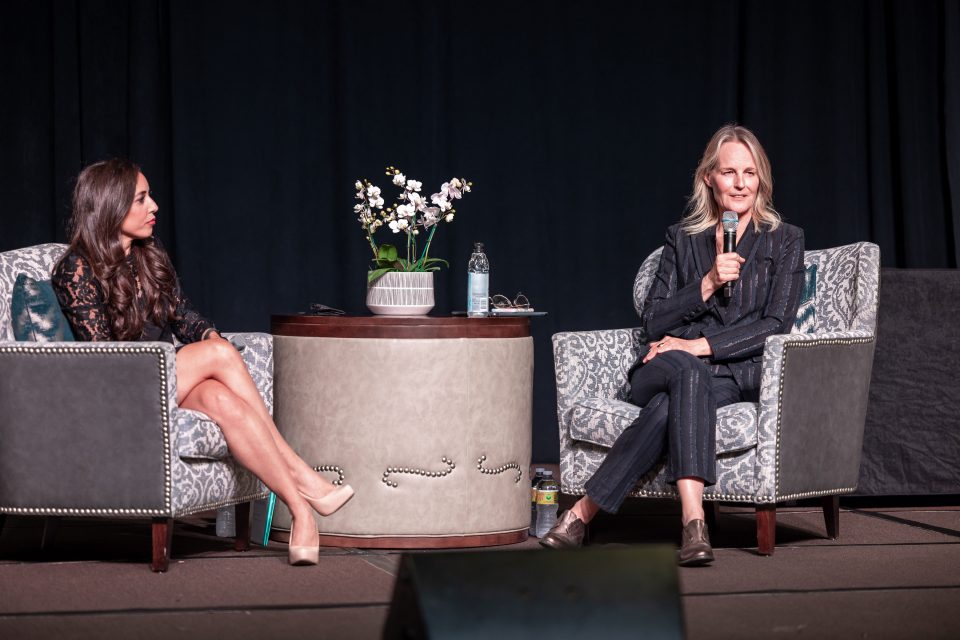 More than 1,000 attendees came together in support of this luncheon – the organization’s largest source of unrestricted operating support

Just 48 hours before the day of the Jewish Family Service’s long-awaited 10th Anniversary Woman to Woman Luncheon on May 25 at the Renaissance Dallas Addison Hotel, the staff learned that Keynote Speaker Kristin Chenoweth was ill and needed to cancel her appearance. This year’s event not only marked the 10thanniversary of the beloved biennial event, but it was also the first time in more than four years the group had been able to be together in a ballroom celebrating the power, influence, and impact of women, and, most importantly, what this event has done to advance the work of Jewish Family Service as JFS Board Chair Julie Liberman stated during her opening remarks.

More than 1,000 attendees came together in support of this luncheon – the organization’s largest source of unrestricted operating support.

“It was a no-brainer for me once I did a shallow dive into the work of Jewish Family Service,” shared Hunt. She added that supporting our neighbor is what is important as is the work of JFS – to support lifelong sustainability while keeping the dignity of the client in mind.

Julie Liberman kicked off the luncheon welcoming the more than 1,000 attendees and thanking the many sponsors, organizations, family and community foundations, and corporate and individual donors for their support as well as the board and staff. Rabbi Shira Wallach, of Congregation Shearith Israel, offered the invocation, leading with a powerful prayer for the victims and families of the Uvalde elementary school shooting.

Woman to Woman Sustaining Chair Linda Garner and Founding Chair Ethel Zale then took the stage expressing their excitement at how much the event has grown since the first one in 2004 – an event which over the years has raised more than $4.6 million, helping to triple the number of clients served.

The audience was directed to the screens to listen to a series of recorded intake calls received by the agency. These illustrated the vast array of needs in the community – a glimpse of what the nonprofit hears each day. Carey Nottingham, director of client navigation and a licensed professional counselor, JFS, then shared more of her experience. “I oversee a team of two who answer up to 800 calls every month,” stated Nottingham. “It has been difficult to be inundated with voicemails from people who need help, and no matter how quickly we call them back, there are hundreds more we still need to call, and the list keeps growing.”

JFS CEO Cathy Barker shared, “With your help, we have been able to grow our professional, effective, and affordable health and social services, going from serving 7,400 individuals in 2004 to more than 39,000 last year.”  Services include career and financial services, food pantry and emergency assistance, older adult services, family violence services, clinical services, and much more as well as referrals for support.

“We have seen a 225 percent increase in calls for help this year,” added Barker as she called for the attendees’ support “to continue to be responsive when it’s needed most.”

In yet another show of women supporting women, WFAA’s Sonia Azad, graciously stepped in as the event moderator to cover for Cynthia Izaguirre, who was called to report on the Uvalde shooting. Azad introduced the keynote speaker, Helen Hunt, while wishing Chenoweth a speedy recovery. Highlighting Hunt’s accomplishments, she shared that she had won a Golden Globe Award, a Screen Actors Guild Award, and an Oscar for her role in the film As Good as It Gets and can most recently be seen in Blindspotting, The Night Clerk, and I See You. Other notable films include What Women Want, Twister, and Pay it Forward.

Helen Hunt began by introducing herself as Kristin Chenoweth – then adding that she was a little older, crankier, less musical, and taller.

“When I heard it was the Woman to Woman Luncheon, with respect to all of the men in the room, I breathed a huge sigh of relief,” added Hunt. “I am grateful for the men who are here and help facilitate this, but at the end of the day, for me, for my whole life, circling up with women is the most important thing I’ve done. I’ve been doing it since my 20s, and I still do it every Thursday.  I gather with a group of women, and we get very real right away.  The women I know just get right to it, and I need that.”

As she began talking about Pay It Forward, she said to the audience, “Given that you have donated your time this afternoon, you are committed to lifting up your most vulnerable neighbors. The part of me that is expressed in that movie is I know when I write a check, show up at a lunch, hold someone’s hand, pick up trash on the beach, I’m also doing it for me. I believe it’s important that I give up the notion or identity that I’m the helper when I go visit people who are sick or dying. If I come in as, ‘boy, you’re really in trouble and I’m here to help you’, I keep them in that role. But if I can come up for air and just let our hearts be together while I’m in that room the way our hearts are together in this very big room, maybe I’ve helped a little bit, and all the tenets of work that you all do are right in line with that.”

Hunt then sat down for a fireside chat with Sonia Azad. When Azad asked Hunt where she found her circle of women, Hunt said, “I’ve had no trouble. If you put out cheap snacks, they show up.” She added, “My experience with other women is that we want to be there for each other – we share strength with each other.”

Hunt also expressed some of her favorite things to do are watch baseball and go to the movies. When asked about a stand-out moment, she referenced her dad, her best friend, her acting teacher, who always gave her a slow, steady drip of encouragement – “which means everything.” She tries to do the same for her own daughter.

Jewish Family Service of Greater Dallas is a nonsectarian mental health and social services nonprofit that has served anyone regardless of age, race, religion, or ability to pay for more than 70 years. Their mission is to provide effective, accessible, and comprehensive mental health and social services that promote lifelong self-sufficiency and well-being for the Greater Dallas community. JFS Dallas offers programs to the community such as individual age-appropriate counseling, family violence intervention, support for older adults, transportation services for disabled or homebound, a client-choice food pantry, and emergency financial assistance. The agency’s comprehensive services impacted over 39,000 lives last year. Jfsdallas.org