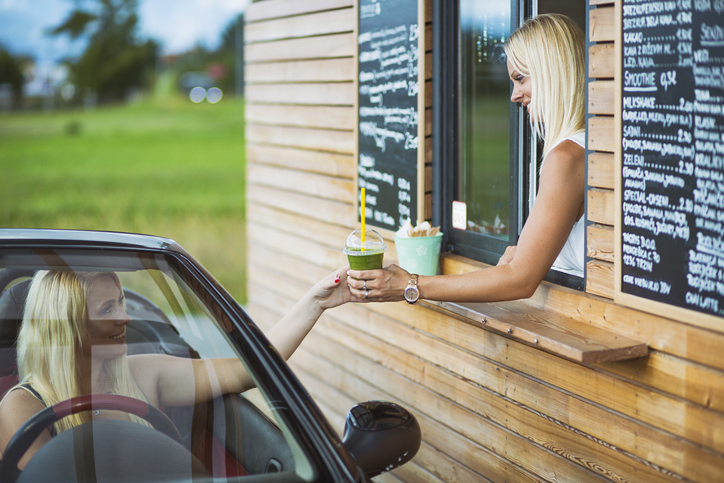 “I passed!” I shouted to my parents after completing the driver’s license test.

My mom smiled, gave me a hug and said, “I knew you would.”

My dad grumbled, “Congrats,” followed by “Now you can get a job since you can drive yourself there.”

And with that glowing endorsement, my teen job search began. I decided to apply for lifeguard positions since the idea of getting paid to get a suntan sounded appealing along with being around cute teen guys with their shirts off.

Well, I found out that being a lifeguard was not as glamorous as it sounded. Instead of getting a suntan I mostly got a sunburn and a lot of times I was bored staring at a pool for ten hours. Sure those teen guys were cute, but they were too busy swimming laps to notice me.

When my teens are ready to get a job, I’m going to nudge them towards a more practical vocation in the fast-food domain. I’ve been reading up on it and there are some perks I never considered.

If you thought bonuses were only for big time executives, then think again. Apparently there is a shortage of teen employees in the fast-food industry which has led to franchise owners offering creative incentives such as bonuses for working a certain number of hours.

I had no idea (and it might not have been an option when I was a teen) that some fast-food chains offer tuition reimbursement or scholarships. Some restaurants that offer tuition reimbursement are Starbucks, Chipotle, McDonald’s and Pizza Hut. Scholarships are awarded to employees by Burger King, McDonald’s, Chick-fil-A, Walmart, Taco Bell, KFC and Pizza Hut. None of the pools I worked at helped me pay for college.

Anytime I’m picking up my food from the drive-thru at Wendy’s, I’m amazed at the person’s ability to both take an order and fill a different one at the same time. This is a skill that will be beneficial for the rest of your teen’s life.  I wish I had this multi-tasking ability when I attempted to feed twin crying babies in the middle of the night or helping my teen twins get ready for school at 6:00 am.

Most fast-food chains have different levels of employees such as shift supervisor, general manager and upper management. This chain (pun intended) of command allows your teen to learn about different roles in business and the opportunity to advance to a hirer level. At the pool where I worked, the same supervisor was there when I started and when I left for college so there wasn’t much of a chance for me to be in a management role.

As a lifeguard, I did interact with people but most of the time I watched them swim. At a fast-food chain, your teen is interacting with customers for the entire time they are working. This entails dealing with many different types of personalities and ensuring the customer receives their order. This skill is something that can help your teen in school and future jobs.

Who’s Ready to Take An Order?

Working in fast food may not be a teen’s first choice as a part-time job, but the benefits make it worth considering. With the cost of college at an all-time high, a scholarship or tuition reimbursement is definitely a huge perk. Unlike my lifeguard job, you also wouldn’t need sunscreen and from the looks of most drive-thrus, they would never be bored.