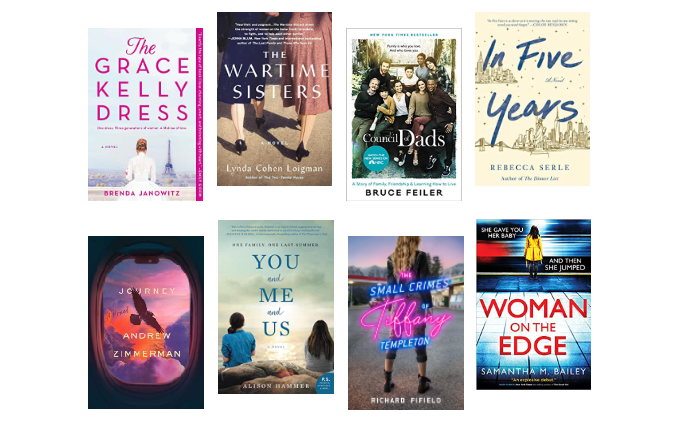 Books to Transport You This Spring Break

The Grace Kelly Dress by Brenda Janowitz  Two years after Grace Kelly’s royal wedding, her iconic dress is still all the rage in Paris—and one replica, and the secrets it carries, will inspire three generations of women to forge their own paths in life and in love. A feel-good story!

The Wartime Sisters by Lynda Cohen Loigman Two estranged sisters, raised in Brooklyn and each burdened with her own shocking secret, are reunited at the Springfield Armory in the early days of WWII. While one sister lives in relative ease on the bucolic Armory campus as an officer’s wife, the other arrives as a war widow and takes a position in the Armory factories as a “soldier of production.”

The Council of Dads by Bruce Feiler Now a major NBC primetime drama, this uplifting story touched the world. A young dad, Bruce Feiler received shattering health news—cancer. Who would be there for his wife and daughters if he were gone? Feiler reached out to six extraordinary men. The Council of Dads is the unforgettable portrait of these men, who offer wisdom, humor, and guidance on how to live, how to love, how to question, how to dream.

In Five Years by Rebecca Serle A Good Morning America Book Club Pick and a striking, powerful, and moving love story following an ambitious lawyer who experiences an astonishing vision that could change her life forever. Where do you see yourself in five years? Brimming with joy and heartbreak, In Five Years is an unforgettable love story that reminds us of the power of loyalty, friendship, and the unpredictable nature of destiny.

Journey: A Novel by Andrew Zimmerman Inspired by real events, this genre-bending, consciousness-expanding debut novel explores the implications of taking a spiritual, life-altering risk to challenge your reality. Steeped in mysticism, wisdom, and wonder, Journey awakens and inspires.

You and Me and Us by Alison Hammer Their world changes in an instant when Tommy receives a terminal cancer diagnosis, and Alexis realizes everything she’s worked relentlessly for doesn’t matter without him. So Alexis does what Tommy has done for her almost every day since they were twelve-year-old kids in Destin, Florida—she puts him first. You and Me and Us is a beautifully written novel that examines the unexpected ways loss teaches us how to love.

A Teen Read and a Thriller

The Small Crimes of Tiffany Templeton by Richard Fifield She is known as Tough Tiff, after her shoplifting arrest and a stint in a reform school. As Tiffany navigates her new life and learns who she wants to be, she must also contend with an overbearing best friend, the geriatric cast of a high-maintenance drama production, her first boyfriend, and a town full of eccentric neighbors—not to mention a dark secret she’s been keeping about why the ex-football coach left town.

Woman on the Edge by Samantha Bailey A moment on the subway platform changes two women’s lives forever—a debut thriller that will take your breath away. A total stranger on the subway platform whispers, “Take my baby.” She places her child in your arms. She says your name. Then she jumps…A read-in-one-sitting thriller!

Finding Your Best You