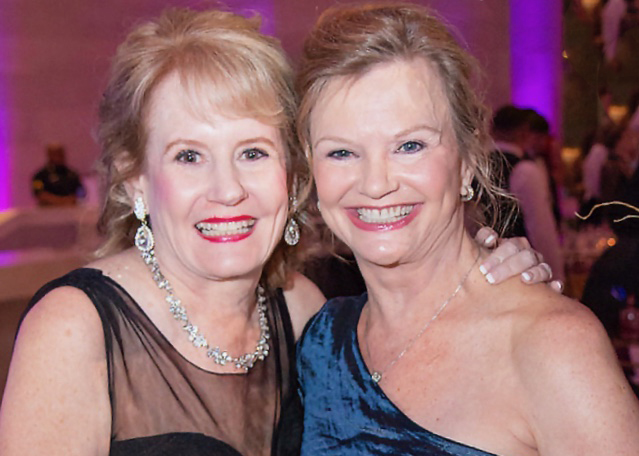 When this dynamic duo met in 2012, they realized they had a lot in common. They attended the same church (St. Michael & All Angels), had some of the same friends and were both Junior League of Dallas sustainers. They became great friends, and now their families, including eight children between them, are friends too.

Their hearts for service brought them together, and now Dixey and Ginger often co-chair events together, including this year’s Beacon of Hope luncheon benefiting Grant Halliburton Foundation and presented by the David B. Miller Family Foundation. The event, set for Tuesday, March 10 at the Omni Dallas Hotel, raises funds and awareness to address mental health issues among youth in Dallas. The Honorable Patrick J. Kennedy – former U.S. Representative, founder of the Kennedy Forum, co-founder of One Mind and New York Times best-selling author – is the featured speaker.

When Ginger was president of the Dallas Symphony Orchestra League (DSOL) in 2013-2014, she heard that Dixey was interested in chairing the DSOL Symphony Presentation Ball. Ginger said, “Here’s someone who wants to chair it. So, I immediately wanted her to do it because it’s such a monumental undertaking.”

Dixey added, “I had a daughter who was a debutante that year. I thought, we have to attend these events and meetings, and it would be so much fun to do something meaningful together. Plus, I knew many of the families, and the honor guard included several of my older daughter’s friends, so it was perfect.”

Hailing from New Orleans, Dixey knows how to plan a festive party, so she incorporated her favorite theme, Mardi Gras, along with her favorite color, purple, into the ball. She even wore a purple gown and had the florist incorporate purple and yellow flowers to create an elegant evening. Ginger also brought her leadership and organizational skills to the table as the two planned for more than a year. The white-tie ball for 1,300 guests included Honorary Chairs Gene and Jerry Jones, who also had two granddaughters making their debut.

Ginger recalled that at the end of the planning, “Jan Strimple, who was involved in the production of the event, greeted us at one meeting with, ‘It’s Thelma and Louise!,’ and it stuck. To the last ball rehearsal, we wore t-shirts with Thelma and Louise printed on them. We don’t need to wear nametags anymore!”

After a successful ball, Ginger’s sister, who was president of the Salvation Army Women’s Auxiliary, asked them to co-chair the 2015 Salvation Army Fashion Show & Luncheon with First Lady Laura Bush and Fort Worth Mayor Betsy Price in attendance. Dixey recounted the story: “We were about to introduce Margot Perot, so she could present the Margot Perot Award to Gene Jones and Charlotte Anderson when all the lights went out. We had already started our script to the theme, Breakfast at Tiffany’s, when everything went completely dark. A Salvation Army member handed us a phone with a flashlight, so we were able to continue with our script. When I said, ‘Today is Audrey Hepburn’s birthday,’ the lights magically came back on. It was a Luncheon to Remember!”

These ladies have created New Orleans-style parties for the Women’s Council of the Dallas Arboretum and the parishioners of St. Michael & All Angels. As Junior League of Dallas sustainers, they’ve co-chaired the AT&T Stadium art tour, as well as an art and wine tour at Ginger’s home. Ginger added, “Thelma and Louise work so well together. It’s a blast because our talents instinctively complement each other.”

For the last few years, both have attended the Beacon of Hope luncheon benefiting the Grant Halliburton Foundation, and the timing was right this year for them to be co-chairs. Dixey said, “Vanita [Halliburton] is a remarkable woman and mother who started this organization in memory of her son. We want to spread the word about mental health and how this foundation has educated teens and young adults about this important issue.”

Ginger added, “This luncheon is important to me because of my family history with mental illness. It’s one of those causes that really hits close to home because I know what it’s like to go through it.” As the mother of six grown children, Ginger has had children who have had serious mental health issues, been hospitalized and attended treatment programs. It’s a painful story that she shares: “Years ago, we didn’t have any resources. If I’d had the Foundation’s Mental Health Navigation Line to call, I would have been able to get more help for my family.”

Dixey added, “We want everyone to attend the Beacon of Hope Luncheon to support the important work of Grant Halliburton Foundation. Patrick Kennedy, former U.S. Representative and son of Ted Kennedy, will tell his powerful, personal story of mental illness and how he now uses his experiences to advocate for others.”

Tables start at $2,500, and tickets start at $200. They can be purchased online at GrantHalliburton.org/boh.

More information can be found at GrantHalliburton.org/.

Why Are So Many Girls Using Anabolic Steroids?