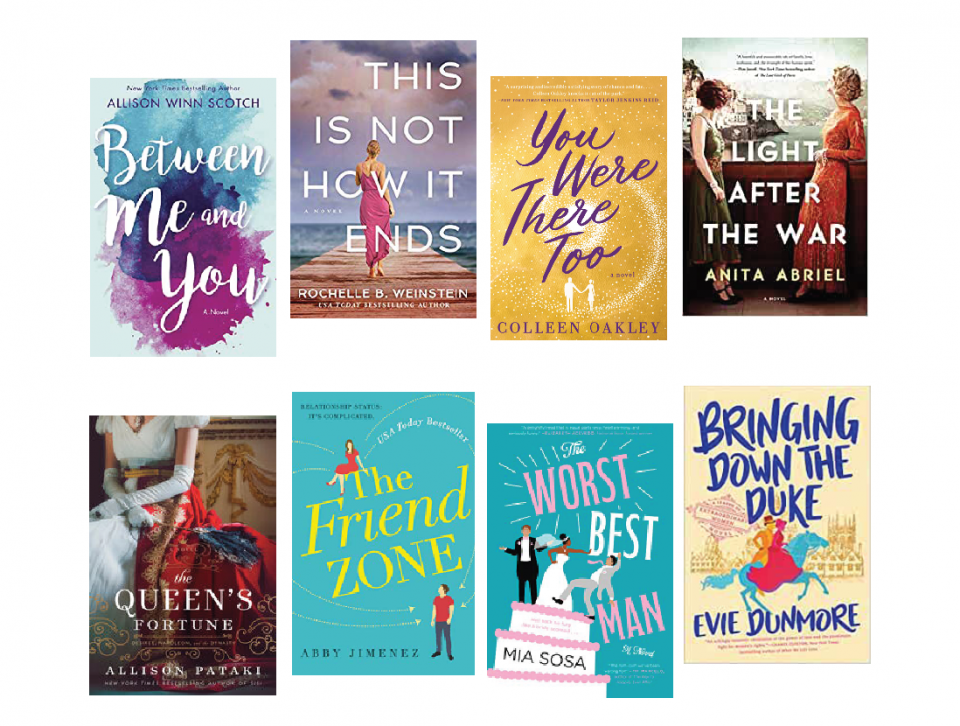 Between Me and You by Allison Winn Scotch A life of passion, joy, tragedy, and loss—once shared—becomes one as shifting and unpredictable as a memory. And as Ben and Tatum explore the ways love can bend and break, they recount their individual versions of the story, Ben’s moving backward and Tatum’s moving forward, each wondering what they can do now to make it work.

This Is Not How It Ends by Rochelle Weinstein A moving novel of hearts lost and found, and of one woman torn between two love stories. When Charlotte and Philip meet, the pair form a deep and instant connection.But just as they should be getting closer, Charlotte feels Philip slipping away.When she meets Ben, she ignores the pull, but the supportive single dad is there for her in ways she never knew she desired.

You Were There Too by Colleen Oakley A heart-wrenching and unforgettable love story about a woman who must choose between the man she loves, and the man fate has chosen for her. What if the life you have isn’t the one that was meant for you?  A novel that reminds us that the best life is one led by the heart.

Books to Take Us Back to Another Time

The Light After The War by Anita Abriel This  sweeping novel of love and friendship spans World War II from Budapest to Austria and the postwar years from Naples to Caracas. It is 1946 when Vera Frankel and her best friend Edith Ban escape from a train headed for Auschwitz and spend the rest of the war hiding on an Austrian farm. Vera finds work at the United States embassy where she falls in love with Captain Anton Wight.

The Queen’s Fortune by Allison Pataki  A sweeping novel about the extraordinary woman who captured Napoleon’s heart, created a dynasty, and changed the course of history. Desiree finds herself at the epicenter of the rise and fall of an empire, navigating a constellation of political giants and dangerous, shifting alliances. Emerging from an impressionable girl into a fierce young woman, she discovers that to survive in this world she must learn to rely upon her instincts and her heart.

The Best of Rom Com Novels

The Friend Zone by Abby Jimenez Kristen Peterson doesn’t do drama, will fight to the death for her friends, and has no room in her life for guys who just don’t get her. Planning her best friend’s wedding is bittersweet for Kristen — especially when she meets the best man, Josh Copeland. He’s funny, sexy, never offended by her mile-wide streak of sarcasm, and always one chicken enchilada ahead of her hangry. Even her dog, Stuntman Mike, adores him. Best witty dialogue ever!

The Worst Best Man by Mia Sosa A wedding planner left at the altar? Yeah, the irony isn’t lost on Carolina Santos, either. But despite that embarrassing blip from her past, Lina is offered an opportunity that could change her life. There’s just one hitch… she has to collaborate with the best (make that worst) man from her own failed nuptials. Still, this star-crossed couple can never be more than temporary playmates because Lina isn’t interested in falling in love and Max refuses to play runner-up to his brother ever again…

Bringing Down The Duke by Evie DunmoreBecause we are  always captivated by British nobility!  A stunning debut novel in which a fiercely independent vicar’s daughter takes on a powerful duke in a fiery love story that threatens to upend the British social order. Locked in a battle with rising passion and a will matching her own, Annabelle will learn just what it takes to topple a duke….