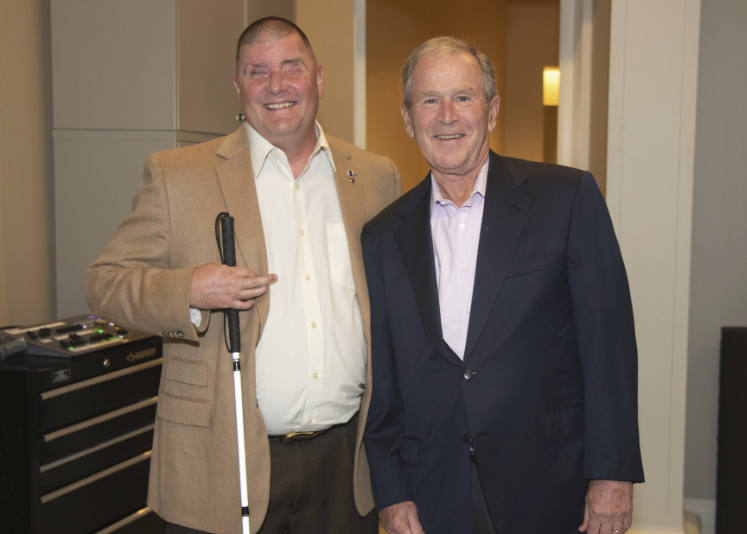 The author Maxwell Frazer said, “You don’t need eyes to see—you need vision.” U.S. Marine Michael Jernigan, a third-generation Marine, currently of Ft. Worth, TX, understands the meaning of this quite literally. In fact, it took the loss of his eyes and other serious injuries sustained while at war in Iraq for him to truly become a visionary.

While proudly serving with Company E 2nd Battalion, 2nd Marine regiment in Iraq, Jernigan’s platoon was hit by two 155mm artillery shells buried underground. It was August 22, 2004 and the Improvised Explosive Device (IED) threw Michael 20 meters from their Humvee, crushing 45% of his cranium with shrapnel that entered through his right eye and exited through his left, cutting everything in between. Two of Michael’s fingers had to be reattached, and his left knee fully reconstructed. His patella was fractured, his femoral artery was cut, and he flatlined. It took 30 major surgeries in 12 months and 16 months in the hospital and rehabilitation facilities to nurse Jernigan back to health.

Though he recuperated physically, Michael said it was then that his troubles really began. His mental state was fragile; he drank and suffered from depression because with no sight, he felt that he had no purpose. While in the hospital, he met his mentor, John Fales, a Vietnam veteran who had lost his eyesight in 1967. Fales assured Michael that he would be okay.

In December 2005, he medically retired from the military and moved to St. Petersburg, FL. With urging from others, Michael returned to college, moving to the Washington, D.C. area, attending North Virginia Community College and then transferring to Georgetown University. Eventually, he realized that it wasn’t about where he was in school, only that he was in school. He returned to St. Petersburg to finish his degree at the University of South Florida.

As a Marine, Michael had a drive to serve, and he knew that somehow, he had to find a way to do that again. As time went on, he began to realize that even without his eyesight, he did have a purpose in life: making a difference in the lives of others.

In 2006, Michael co-founded Paws for Patriots at Southeastern Guide Dogs, an organization that provides guide dogs and service animals to veterans. He worked with the seeing eye dogs until 2014 when he moved to the Dallas area. There, Michael became certified in Entrepreneurship at Southern Methodist University, eager to start his own business, and in 2017, established his current business, Michael Jernigan Motivates.

Michael’s favorite saying is, “It wasn’t until I lost my sight that I gained my vision.” He realized that many people only rely on their eyes to see but miss out on life’s most precious moments, which need to be felt. Now, he and his wife, KimberLee travel the country so that Michael can speak to and motivate children and adults to live their lives with purpose and develop their personal vision. He conveys his message to those at underserved, lower income, and alternative schools.

“I tell the kids that as a Marine, I was highly trained for a mission, and then all of a sudden, I was in the hospital with no eyes and realized that now someone would have to take care of me,” he said. “I then tell them even if you feel helpless, you can still honor yourself and have courage, commitment, and character. I show them that it is possible to get back on track, remember your core values, adapt, and overcome.”

Michael currently serves as the President of the Blinded American Veterans Foundation in Washington, D.C., where he and KimberLee will soon relocate to from Ft. Worth. The couple is lobbying Congress to make legislative changes to improve the lives of blind and visually impaired veterans.

In addition, Michael works as part of LaDainian Tomlinson’s Team America program helping teach character and leadership to America’s youth. He speaks at schools and football camps, providing positive reinforcement and tackling how to face adversity and grow from it.

For his service to our country, for his resilience and perseverance, and for motivating others to overcome adversity and find their vision, Good Life Family Magazine presents Michael Jernigan with our Very Inspiring Person Award.

Our Very Inspiring Person Award honors the everyday, and not-so-everyday, heroes in our midst. Those whose tenacity, integrity, and courage inspire others to exemplify the same character and put their families and community first, in spite of the challenges life has thrown at them. For complete details or to nominate, visit goodLIFEfamilymag.com or email Tricia@goodlifefamilymag.com.

Books to Take You Up and Away