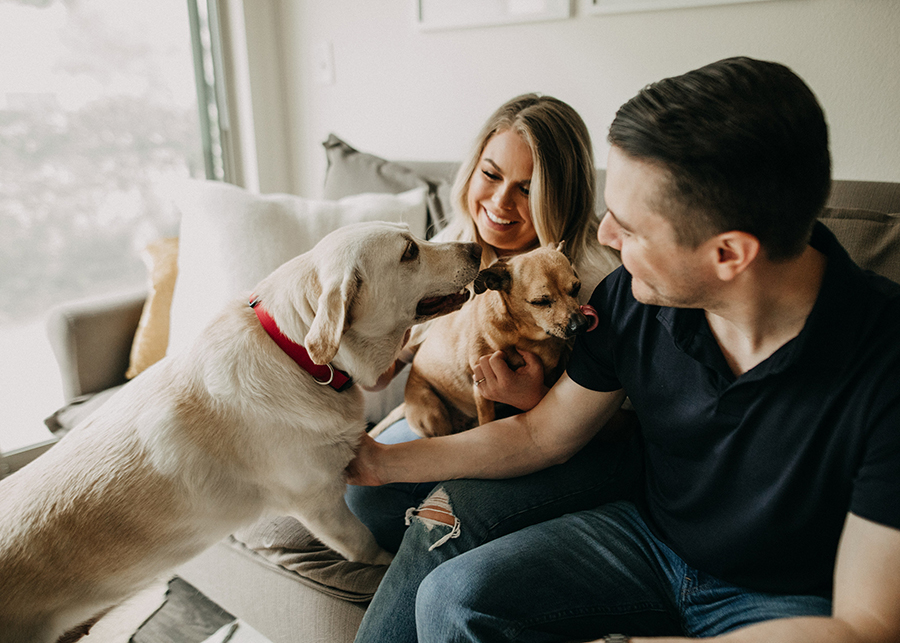 Last spring, a Dallas Pets Alive (DPA) Instagram post caught the eye of Christine Saba and her fiancé, Garrett Myer.  Dottie was an older dog with some medical problems.

“The veterinarians at Dallas Animal Shelter (DAS) noted Dottie as being ‘headshy,’ a condition where a dog ducks its head when you reach out to it,” Jessica Dudek, Medical Director for DPA, explained. “Dottie had glaucoma in one eye and cataracts in the other.  She was likely completely blind.”

Working with a blind dog was nothing new for Saba and Myer.  They shared ownership of Persie, a blind “cha-weenie.”

“When we came across Dottie on Instagram, the video of her scared, alone, and blind broke my heart.” Saba said. “Persie taught us how difficult life can be for a blind dog.   But the thing that caught my eye in the video was that her tail was always wagging.  I knew she needed our attention and love.”

“Convincing my fiancé was my next task,” Saba said.  “We were in the middle of planning our wedding, and I had learned earlier that year that my dad was diagnosed with an aggressive form of cancer. I was going to Houston frequently to help him and my mom, and Garrett and I were both busy with our demanding jobs. However, we kept thinking about Dottie, and finally I reached out to DPA and sure enough Easter Sunday I picked her up, and we both committed to doing everything we could to help her find her forever home.”

According to Dudek, due to uncontrollable pressure from glaucoma, it was recommended that Dottie have eye surgery.  During surgery, it was determined that the other eye was also diseased to the point that it was best to remove the eye before it started being extremely painful.  The cost for the surgery was covered by Dallas Pets Alive.  DPA covers all the pet care cost for their fosters across North Texas.

“She looked absolutely brutal coming home from surgery,” Dudek recalled. “She had managed to scrape herself and was bleeding overnight, but her amazing fosters were right there to make sure she was okay. Christine and Garrett kept her calm and comfortable on pain meds and within a few days there was a noticeable difference in her health and wellness.”

“We take an innovative approach to animal rescue,” Sans says. “We believe in creating a shift in the way our community views animal rescue. Since DPA’s founding in 2012 as a foster-based rescue organization, we run on volunteer and foster power; without these individuals we could not save lives.”

“DPA is full of humans with huge hearts, and we are able to ensure success by making sure we have foundations of support in place.  DPA believes that we can only save more if we are taking care of those who are saving,” Danica Butler, DPA Foster Director, explained.

Saba’s foster experience says it all, “They were so attentive, responsive, checked in before I could even reach out. The support is unreal, you won’t find anything else like it. Between the social media groups and having a DPA foster rep, they just really make you a part of a family, a family of people who care about dogs as much as you do.”

Fast forward to September: Dottie, whose name is now Lola, has found her forever home with Saba and Meyer.

“We both cried and made a list of the pros and cons for Lola, for what would make her life complete and decided that the biggest pro was that we loved her more than anyone could ever love her and that that was enough.”

This holiday season, fostering a dog or cat might be the best present you could ever give, not only for you and your family, but also for the pet in need.

Editor’s Note: Ron Jenkins serves as Development Director at Dallas Pets Alive. To become a sponsor, learn about fostering, or to volunteer, contact him at www.dallaspetsalive.org.

8 Things To Do Before Applying for a Mortgage