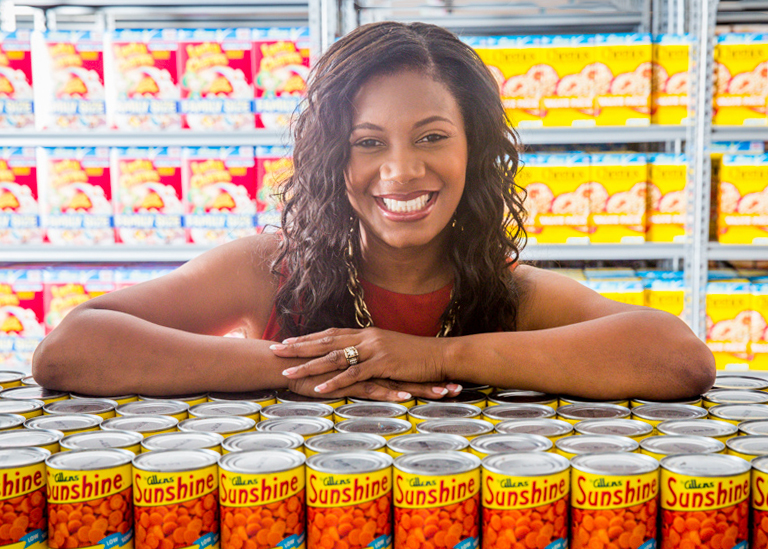 The website quotes Mother Teresa: “If you can’t feed one hundred people, feed just one.” Indeed, after starting out with only two cans of corn, Cheryl “Action” Jackson, founder of Minnie’s Food Pantry in Plano, and her staff and volunteers have served almost ten million meals to about 60,000 people per year in North Texas during the last decade.

Cheryl recalls her first visit to get food stamps as a “horrific” experience. She married at just 17 years old, and her father told her husband that if he couldn’t support her, he should bring her back home. The two struggled to make ends meet and worked five jobs between them to pay the bills and feed their two children. One day, feeling hopeless, Cheryl went to apply for food stamps.

“We were hungry; we needed a meal. I didn’t want to have to go to my parents,” she explains. “It was the lack of dignity of that experience that lit a fire from within me. I knew there had to be a better way.”

While working at a paging company, Cheryl happened to sell Dallas Cowboys running back Emmitt Smith a pager. She eventually went into business with Smith and saw him give back to the community, from food and toys to money and holiday meals. Cheryl realized that giving on a large scale like this was a goal she aimed to achieve.

When she won a contest to conduct interviews for Fox News at the Academy Awards, what struck Cheryl the most was watching people as they walked the red carpet. There was something dignifying about that red carpet, and she knew it was some sort of a sign.

Cheryl’s father died on Father’s Day 2004, and she became depressed. Her mother, Minnie Hawthorne-Ewing D.D., was there for her during this time and encouraged her to do something meaningful to help bring her out of despair.

“I was so grateful to my mother, and I wanted to honor her; I wanted the world to know her name,” says Cheryl. “A small voice inside me said to feed the hungry, and so I embarked on Minnie’s Food Pantry.”

Minnie’s served its first meal April Fool’s Day in 2008, a fitting date because people said no one in the city of Dallas and its surrounding area was hungry.

“The joke was either on us or on them,” Cheryl says. “It wasn’t long before I put that opinion to rest, as we began to serve numerous people experiencing food-insecurity with healthy meals, fresh meats, and fresh produce to prepare meals for their own families.”

If people had to visit a food pantry, Cheryl felt they should be able to do so with dignity. The Oscars’ red carpet came to mind. From that moment on, visitors to Minnie’s Food Pantry would hold their head high and walk the red carpet, be greeted with music, candles, and smiles from the employees and volunteers.

“I was a girl on a mission to feed people and wanted to treat people the way I wanted to be treated,” Cheryl adds. “We are what I call ‘the Taj Mahal’ of food pantries.”

She is aptly referred to as Cheryl “Action” Jackson, as she tirelessly promotes her cause. Minnie’s Food Pantry has been featured in the media and on many television shows. After Cheryl tried for eight years to get her attention, Oprah Winfrey was so impressed with Cheryl’s “relentlessness” that she personally donated over $600,000 and was the keynote speaker at the Minnie’s Food Pantry Gala last year, which raised $1.3 million.

Minnie’s Food Pantry also offers food and health education to assist its clients with overall wellness. In addition, there are programs to feed children 18 and younger breakfast and lunch during the summer months when they can’t get food at school, and of course, they provide food for the holidays. They feed seniors, veterans, and struggling day laborers and have recently moved into three new buildings, one of which will house Minnie’s Empowerment Center, a training facility to teach their clients skills, so they can go out and get jobs to better support themselves.

“We want to put ourselves out of business,” says Cheryl. “If people learn, get a better job, and earn more money, eventually they won’t need a food pantry.”

Minnie’s holds “job hires” as Cheryl calls them, not job fairs. Amazon was their first company, who hired applicants on the spot. They went from making $9/hour to making $15/hour and had benefits their very first day of work.

Cheryl currently lives in McKinney with her husband. She has two children and four grandchildren who learn from her example. In fact, one of her sons has worked with her from day one.

For her dedication to feeding the hungry in a dignified manner, for educating them about total wellness, for training them to make a better living, and for her overall relentlessness in achieving her mission, we present Cheryl “Action” Jackson with our Very Inspiring Person Award.

Editor’s Note: Minnie’s Food Pantry is a 501(C)3 non-profit organization that provides over one million meals to more than 60,000 individuals annually. As one of the largest food pantries in North Texas, it has been named the #1 Charity in Dallas and Community Partner of The Year by The City of Plano. Led by Cheryl’s relentless activism, Minnie’s Food Pantry has been featured on many national television shows, including Good Morning America and The Ellen DeGeneres Show.  For more information, go to www.minniesfoodpantry.org.

Our Very Inspiring Person Award honors the everyday, and not-so-everyday, heroes in our midst. Those whose tenacity, integrity, and courage inspire others to exemplify the same character and put their families and community first, in spite of the challenges life has thrown at them. For complete details or to nominate, visit goodLIFEfamilymag.com or email Tricia@goodlifefamilymag.com.

Parents of Special Needs Children Need to Plan Ahead