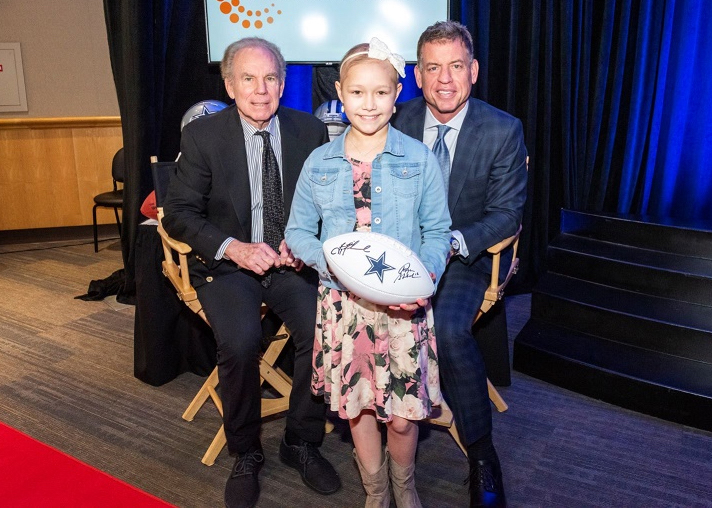 Her mother always said she would one day change the world, but for 12-year-old Haylie Geraci of Trophy Club, TX, the call of duty came at a young age. She’s now on a mission to create awareness for blood donation and childhood cancer, following the diagnosis that she and her family could never, in their worst nightmares, have imagined.

The typically energetic fifth grader was extremely tired and suffered from a bad stomach ache. A doctor visit included a blood test and a sonogram, and the results were devastating.

“They called me at home, said Haylie was critical, and told me to take her to the emergency room as soon as possible,” said her mother, Melissa Geraci. “Her blood volume and platelets were dangerously low, and she desperately needed blood. However, Haylie’s blood type is the very rare B negative and was not readily available.”

Blood and platelets were crucial, as Haylie could not have a spinal tap nor chemotherapy treatment in that condition. Hospital staff worked to find a match, but by midnight that night, Melissa was told there were no platelets available.

Haylie spent three days in the Intensive Care Unit, and the search for blood continued. Melissa’s viral Facebook post resulted in a huge response. Their church hosted a blood drive, one of the largest blood center officials had ever seen. Haylie’s dad’s Army colleagues came out in force to donate, alumni from her parents’ college offered to pay to fly people in so they could give blood, and Haylie’s little brother’s baseball team helped to raise awareness and money.

Haylie was in the hospital for a month. When she came home, the town had a parade, and residents tied teal (her favorite color) ribbons on trees and posted yards signs that said, “Healing for Haylie.”

While Haylie still needs two more years of chemotherapy, she is doing better and was just released to return to her 6th grade class after being homebound since her diagnosis. In between her studies, she makes videos for local schools and churches to promote her cause.

Haylie has become an advocate for the Children’s Cancer Fund (CCF) in Dallas and recently spoke at their Patron Party, where she answered questions about childhood cancer and finding a cure. She was recently a model in the CCF Gala fashion show which took place in April.

Jennifer Arthur, CCF Executive Director says that Haylie and her family are examples of why CCF works so hard to raise critical funding to hopefully one day help eradicate childhood cancer.

“Every year, I am amazed at the incredible strength and joy found within each of the children who model at the Gala, and Haylie is no exception,” said Arthur. “She’s been through a lot yet keeps a smile on her face and always thinks of ways to help others.”

CCF helps ease the emotional strain of treatments and provides a more positive experience to families, Arthur notes. They fund a Child Life Specialist to assist the medical team at Children’s Medical Center.

“A cancer diagnosis is devastating, and treatments and surgeries are hard on kids and the families,” Arthur adds. “The Child Life Specialist makes sure the family understands the plan of care, helps put them at ease, and provides comfort and support.”

For drawing on her own experience to create awareness for blood donations and childhood cancer and for her courage, strength, and dedication to helping others, we present Haylie Geraci with our Very Inspiring Person award.

Looking to a Brighter Future Thanks to Rainbow Days