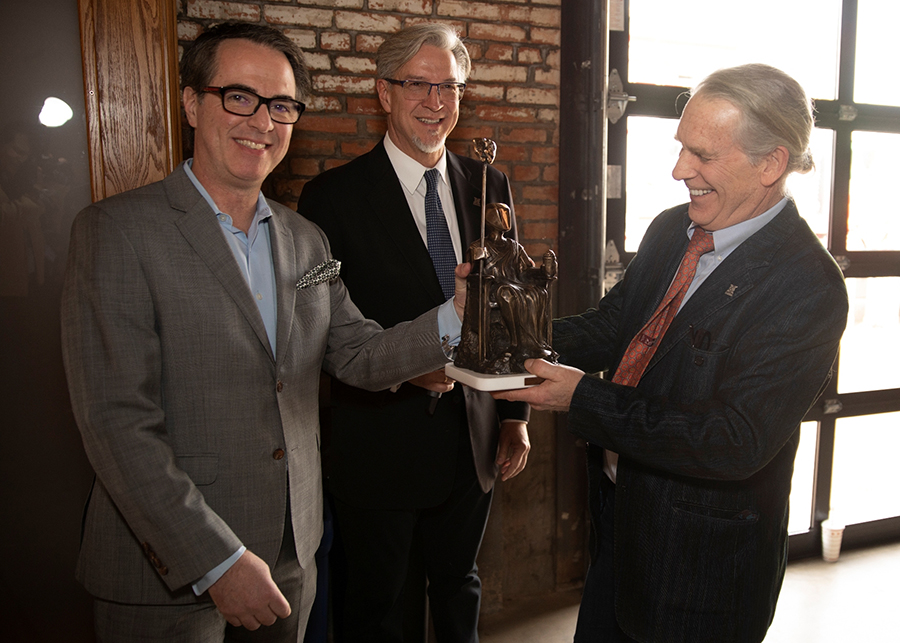 Dallas Film recently honored Trammell S. Crow with The Stodghill Award at the 2019 Spotlight Luncheon at Four Corners Brewing Company. The Stodghill Award recognizes individuals for their long-term philanthropic efforts on behalf of the art of film. Proceeds from the luncheon benefited The Veterans Institute for Film & Media (VIFM) powered by Capital One. VIFM is an innovative program of Dallas Film that prepares veterans for careers in film, TV and digital content production through education, mentorships and job placements.

“Trammell is actively involved in the arts and is a philanthropic stalwart in the Dallas community,” said Johnathan Brownlee, president and CEO of Dallas Film. “He is, and has been, a steadfast supporter of Dallas Film and the Dallas film community for many years. Most recently, his involvement extends to include the founding of EarthxFilm, a festival that uses the power of film and emerging media to raise awareness of environmental and social global issues. Dallas Film owes much of our continued success to Trammell. We are proud to call him our friend and honored to present him with the Second Annual Stodghill Award.”

The Stodghill Award was created in honor of two of Dallas Film’s most ardent supporters, Steve and Anne Stodghill. The award itself is a signature sculpture designed by Brad Oldham Sculpture. In his faceted Art Deco style, Oldham sculpted a Thespis-like character sitting in a movie theater chair with his comedy and tragedy masks in one hand and a bucket of popcorn in the other.  The award design serves to express the concept that the viewing experience is highly relatable and timeless while ultimately democratizing the industry, as anyone can be transported via the story told.

“I cannot think of a person more committed to philanthropy and support of film in Dallas than Trammell S. Crow,” said Steve Stodghill. “With his support, organizations such as Dallas Film have flourished and provided a variety of services and programs to the Dallas community. Proceeds from this luncheon benefited a very unique Dallas Film program, the Veterans Institute for Film & Media, which exists to support veterans in a nonpartisan and humanistic endeavor, integrate them into the civilian community and help them develop and transfer unique qualities to media production.”

America has been at war for more than 17 years – the longest period since the Vietnam War. More than 2.5 million men and women have served since 9/11, and more than 1.5 million have separated from the service since then. Today, more than 500 service members will become civilians, and 65-80 percent of them have not lined up a job to help them reenter the civilian workforce. The goal of the Veterans Institute for Film & Media is to unite U.S. veterans with the civilian community.

“Many veterans find it difficult to reintegrate into their communities,” said Brownlee. “They have a hard time answering the question ‘Who am I now I no longer wear the uniform?’ However at VIFM, we help them find ways to transfer many of the skills they may not even know they possess into a new team and a new mission. VIFM pairs them with a job that provides meaningful, fulfilling work that can be performed in any city in any market around the world and allows them to be independent entrepreneurs. With the help of those who supported the luncheon, we will be able to assist even more veterans.”

About Dallas Film
Dallas Film (www.dallasfilm.org), established as Dallas Film Society in 2006, is a 501(c)(3) nonprofit organization that exists to celebrate the past, present and future of film in our community. The organization provides leadership in screen education and the recognition and celebration of excellence in the art of film, television, and digital media. Through a variety of screenings, educational programs, and festivals, Dallas Film raises awareness of the world’s most approachable and inclusive art form.

The festival, which is the largest film festival in North Texas, will be held from April 11 to April 18, with screenings at Magnolia Theater, West Village in Uptown Dallas, Studio Movie Grill, Royal Lane, and at the Dallas Museum of Art. Additional venues will be announced later.

The purpose of the Dallas International Film Festival is to bring people together to celebrate a relatable art form that connects individuals through shared experiences. Last year, DIFF welcomed more than 100 filmmakers, screened more than 130 films from 22 countries and achieved an attendance of more than 80,000. This year, in order to offer guests a better customer experience, Dallas Film is partnering with Atom Tickets to offer reserved seating via a mobile app. DIFF is the pilot film festival to offer this benefit to festivalgoers. In addition, Star Pass holders will have an opportunity to reserve premium seats.

To purchase passes, please visit https://dallasfilm.charityproud.org/EventRegistration/Index/1710 or go to www.dallasfilm.org

Good Life Family Subscribers: Use these codes to receive your discount:

Outdoor Fun for Everyone