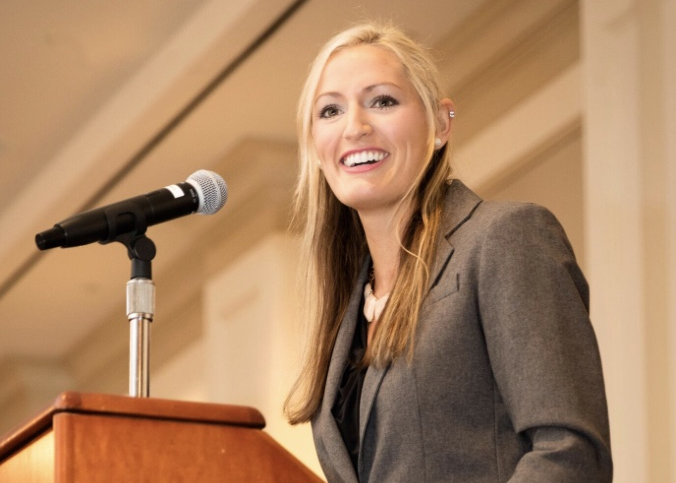 They say silence is golden.

That silence is what child sexual abuse offenders depend on when perpetrating their crimes. Its use is manipulative and can produce fear, shame, and punishment. For Jenna Quinn of Melissa, TX, it was breaking the silence that led to the conviction of her predator. It also provided her with the strength to help educate others about the signs of child sexual abuse and resulted in the passing of Jenna’s Law.

While she was growing up in Carrollton, TX, Jenna’s parents worked hard and made sacrifices, so she could attend private school. They thought that by sending her to private school, Jenna would be protected from bad influences. Her family and the family of her sexual predator met when she was in second grade, and he started to groom Jenna when she was 12. Grooming happens over time as the offender gains trust and access to the child in order to sexually abuse them. Jenna explains that grooming is a gradual process and not a single event.

“Over 90% of the time a child is abused by someone they know and trust. Perpetrators use the relationship to the child as a deposit for their silence,” Jenna says. “It’s easier to tell on a stranger than it is a trusted family member, coach, or loved one.”

By the time Jenna was 16, she was just a shell of her former self. She went from a vibrant young girl to a withdrawn, anxious, depressed, and suicidal teen who suffered from insomnia and night terrors. Her innocence had been stolen, and she lost her will to live. Jenna no longer possessed self-esteem and built walls of self-protection. Visits to several doctors, psychiatrists, psychologists, and counselors yielded no diagnosis, and her family and friends couldn’t understand what had happened to the old Jenna.

The silence had her in her predator’s grip: she was afraid to speak up due to threats, intimidation, false sense of shame, fear of not being believed, and consequences for her loved ones. Being sexually abused throughout her tweens and teen years by an adult who had the trusted roles of both honorary family and coach, made Jenna feel hopeless and powerless.

“It’s estimated that about 2/3 of children don’t tell,” Jenna notes. “There are many reasons for this. For me, it was because I didn’t know how to tell my best friend their father was a monster, and I didn’t know when threats from the perpetrator would follow.”

A simple lunch at a restaurant with her older sister Stephanie was the turning point. It was the day after Christmas 15 years ago when Stephanie asked then 16-year-old Jenna if anyone had hurt her. Jenna broke down in tears and revealed the ugly truth.

“I’m so grateful that my sister Stephanie finally asked me this simple question because it opened the door to my freedom,” explains Jenna. “She did all the right things: she believed me, assured me it wasn’t my fault, and helped me to tell my parents, so it would stop for good.”

Jenna’s parents were heartbroken and devastated. They embraced Jenna, believed her, and told her the offender would never hurt her again. Her father called 911, and police officers came to their home. No one slept that night.

“Child sexual abuse is a crime that makes victims and family members feel very isolated,” Jenna says. “I’m grateful a woman at the police station gave my parents a brochure about the Children’s Advocacy Center.”

Jenna was reluctant at first but responded well to the warm greeting when she and her parents arrived at the Children’s Advocacy Center of Denton County. It didn’t take long to tear down her wall of self-protection. Jenna was diagnosed with PTSD, anxiety, depression, insomnia, and suicidal ideation. She learned of the courtroom, as their relationship could never go back to the way it was.

“Although I was on the stand for over three hours, I felt braver and stronger for facing him,” Jenna says.

In the end, her perpetrator pleaded guilty and was sentenced to 20 years in prison.

In 2007, Jenna went back to The Children’s Advocacy Center to fulfill her Psychology internship hours. With a different perspective this time, she saw how prevalent child sexual abuse is and the impact it has on society.

“It’s estimated there are 42 million survivors of child sexual abuse in America alone,” notes Jenna. “Texas State Representative Tan Parker R-Dist. 63, visited the Advocacy Center with his wife. I shared my experience with him and addressed the need for prevention education. After our informal meeting, we started pursuing Jenna’s Law, a requirement for prevention education in schools.”

Jenna’s Law was introduced and passed in the 2009 Texas legislative session and received a unanimous vote from the House and the Senate. It requires that each school district adopt and implement a prevention policy that educates primary and secondary school students and teachers on how to recognize and report child sexual abuse. It was the first comprehensive child sexual abuse prevention education mandate in the U.S for both students and teachers. Now, over half of the states in the U.S. have adopted legislation reflecting the principles of Jenna’s Law education.

“I know what it’s like to wear the shackles of shame that so often accompany this crime,” Jenna says. “When you break free from those shackles, you want others to be free, too. My hope is that survivors speak up, receive the services they need, and thrive.”

Jenna has taken a profoundly negative, difficult and powerless experience and turned it into a powerful advocacy for others. She has received local and national support for her openness and honesty about the need for prevention. She partnered with Childhelp USA and their “Speak Up Be Safe” anti-victimization program for children and youth, a prevention curriculum aimed at stopping and preventing child abuse, including physical abuse, emotional abuse, sexual abuse, neglect, bullying, and cyberbullying.

Since 2004, Jenna Quinn has spoken at over 100 Children’s Advocacy Centers across the country and has truly dedicated her life to “Stopping the Silence as a Voice for the Voiceless.”

For her courage, grit, and tireless dedication to preventing child sexual abuse and promoting education and awareness,  Good Life Family is honoring Jenna Quinn with our Very Inspiring Person Award.

Is it a cold, allergies or sinusitis?