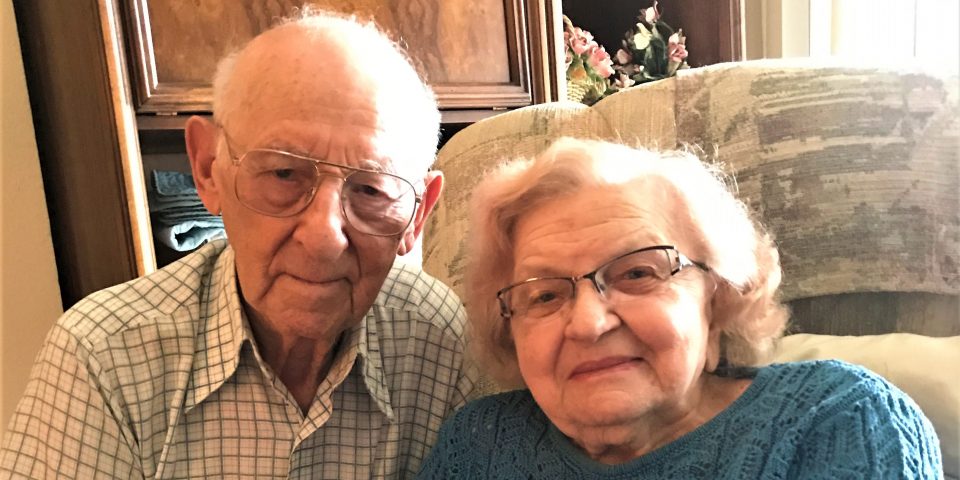 To have and to hold til death do us part.” These words couldn’t be more meaningful to those celebrating devotion not always rosy, but always blessed.

For Jan and Malva Axel, who celebrated 72 years on December 2, life has been a global experience, first meeting at a party in Iasi, Moldova.  WWII had just ended, Romania was under the Soviet occupation, and family members had become victims of the Holocaust—Malva’s father killed, her own life safe after an earthquake distracted her imminent demise. A German soldier had spared Jan due to his reputation as a jeweler.  Following years of yellow stars adorning their clothing, curfews, hiding and survival by might, they dedicated their future to their parents’ memory. “We aren’t them, but we carry on their traditions,” said Malva.

In 1948 they emigrated by walking from Romania to Bulgaria where they boarded a boat meant for 20, packed tenfold.  Malva was pregnant, and they survived on bread, but they arrived to live on an Israeli kibbutz.  “There was a toothbrush,” said Jan, his eyes smiling.  “We were safe in a good life.”

Jan went from picking oranges to working for a jeweler, a career  he rebuilt over 17 years.  He moved to New York, followed a year later by Malva and their son, she working for the city then joining Jan in Axel Design, the two moving to Dallas once their grandson was born.

Malva and Jan shine over their three great-grandchildren, in tandem saying “We see these babies and know that in good times and bad, together was all we had.”

You are equal in the marriage—each is half of the whole.

Never look in the other’s wallet. You shouldn’t find what was spent on a gift.

We thank Major General Eugene Fox, US Army retired, for his service, but he too thanks the service for Evelyn, his bride of 61 years this February 2.  While Gene was serving at El Paso’s Fort Bliss, Evelyn walked into a party where he was standing against a fireplace.  They met, were engaged and married inside of five months.

The career of duty, honor and country that Gene’s third-grade self dreamed of was enhanced by Evelyn’s love of travel—an understated asset for a military spouse.

From bases around the States and his tour to Vietnam, she cared for their parents and four children.  When separated, the two wrote letters to each other, phone calls a rarity.  After 33 years of service, Gene retired, Deputy Commander of the Strategic Defense Initiative in the Office of the Secretary of Defense.

“I knew he’d be special,” said Evelyn, who graduated from George Mason University, with classmates four decades her junior, always setting an example—even now to their 11 grandchildren.  They worried about the community their family would have, so they built it—Evelyn teaching religious school and working with the Army Community Services.   “Every move was an adventure we could never replace, and I couldn’t, I wouldn’t, change a moment.”

“Our kids learned a sense of self and as many military children will say, the best part of this life is the friends you make—the worst, is the friends you leave,” said Gene.  “For this generation communication and reuniting with those in their past is much easier.”

You won’t always agree.  You don’t have to.

Families have ages and stages.  Give a little, or a lot, but always be a united front.

Ninth grade sweethearts, G.A. and Sara Salmon met and got to know each other at church and on the school bus to Carrollton High School.  Their first date singing Christmas carols, while riding on a Blanton Grain truck, led to their “I dos,” 72 years ago last November 9.

“She was my football sweetheart and is the smartest woman I’ve ever known,” said G.A.  “You can’t just think about yourself because a family helps each other, and for us it’s always been ‘we,’ not ‘me.’”

G.A. registered for the U.S. Air Force the week before graduation and off to Tacoma he went.  Sara soon followed but the two were set to say their goodbyes for a lengthy period as G.A. was packed for deployment to Korea until President Truman halted troops just before departure.

She worked for the founders of Tom Thumb grocers, while he put in three-plus decades at Eastman Kodak, and the couple “grew up” with their children, with their church and faith—where they began—always at the center of their lives.

“I knew when I was a little I wanted to be a mommy.  When I met G.A. I was young, but I had the right man,” said Sara, fulfilling that dream with two children, four grandchildren, and seven great-grandchildren.  “You can hardly separate us.  It’s been that way most of our lives.”

You have to work at marriage and not let marriage be work.

You are marrying a family, not a person, and you will become one family.

“On the road again,” could be the theme song for Jean and Bob Weinfeld, who are toasting 62 years on March 25.  A lingerie salesman traveling through her hometown of Little Rock, AK, Bob was introduced to Jean, but he called too late and didn’t get a date.  Fortunately, Jean gave him another chance when he called on a Monday, for the following weekend.

“We developed independent lives even though we were very connected,” said Jean, reflecting on the weeks Bob was gone or the long days later as an insurance exec, and how they made the most of the weekends he returned home.  “Even with 16-hour days, family was a priority.  He never missed activities or programs, and he’d take the girls to the symphony and sporting events. He was present.”

Jean, who taught Sunday school and worked showroom markets when their two girls were young, later returned to retail for more than 30 years.  The years haven’t slowed either of them—both still engage in classes, programs and community leadership, all while supporting each other’s still-so-busy schedules, a key to their relationship.

The greatest of cheerleaders now for five grandchildren, the Weinfelds enjoy traveling the U.S. and Europe, to Israel and islands by planes, trains and automobiles—also by donkey and boat!

Enjoy the love and the moments.  Open your eyes each day and say “thank you.”

Realize the longer you live, the more you have to live for.