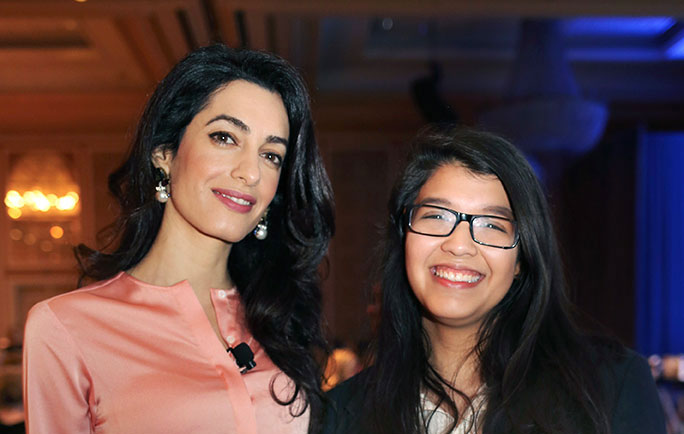 “If your actions inspire others to dream more, learn more, do more and become more, you are a leader.” – John Quincy Adams

Sammie and the other 66 girls in her class participated in a six-week curriculum presented by the Nest Foundation and New Friends New Life (NFNL), organizations that work to prevent human sex trafficking and provide support for its victims. Included in the curriculum was the documentary Playground: The Child Sex Trade in America directed by filmmaker Libby Spears and produced by George Clooney, Steven Soderbergh and Abigail Disney, which speaks to the sexualization of girls, how they are socialized and how this makes them vulnerable to predators.

According to Irma Rangel Director Diana O’Connor, “the program truly transformed Sammie’s class.” Not only did all the girls want to continue the effort against human trafficking, but it also especially resonated with 15-year-old Sammie, who made it her mission to spread the word. “It showed me how vulnerable girls my age are, how we don’t really think of human trafficking as a problem in America, but it is so prevalent,” says Sammie. “We don’t realize how much we promote sexuality in media. It’s not going away any time soon, so it’s up to our generation to take action.”

Equipped with wisdom beyond her years, Sammie decided that taking action begins with her. “It makes me smarter about how I present myself and go about doing things and how I view media. I think it’s really affected what kind of music I listen to; if you think of what they convey in music and how they present women, it’s really vulgar. That really stuck with me,” she says. “Also, TV’s over-sexualization of minors actually makes me nauseous.”

Sammie has taken that message into the community, focusing on the problem in Texas and in Dallas specifically. She spoke eloquently at an NFNL forum as a moderator influencing judges, FBI agents and lawyers on human trafficking legislation. Sammie was also the Dallas youth representative at the recent NFNL Wings Gala, speaking without any notes to 1700 people. She says, “I want the public to know that we as youth have a voice.”

O’Connor is very proud of Sammie. “She is an exceptional young lady,” she says. “We know that all the girls in her class will take this type of thinking to college and either start an organization or join an existing one. We’re planting seeds.”

Sammie says she was inspired by her two older sisters, one of whom graduated from Irma Rangel. “It’s a strong community,” she says.

“There are people here to back you up and help you achieve what you want to achieve.”

As a result of her leadership skills and scholastic achievement, Sammie was chosen by the U.S. State Department to spend time in a country where English is not taught. As for her future plans, “I want to go to law school,” she says. “That’s definitely for me.”

For her vision, insight and commitment to creating awareness about human sex trafficking, we award Sammie Casas our Good Kid Award and a $250 scholarship to use as she wishes.

The Good Kid Award is presented to a student aged 12 to 21 who displays exemplary character, courage and personal values and, who, without asking for attention for their efforts, causes others to take notice. For their genuine commitment to helping a person, organization and/or their community, the winner of the Good Kid Award receives a Certificate of Achievement and a $250 scholarship. To nominate a student for this prestigious award, click here or email Tricia White, Managing Editor, at Tricia@goodlifefamilymag.com.

The Irma Rangel Young Women’s Leadership School was the first public all-girls school in Texas and is a member of the Young Women’s Preparatory Network (comprised of seven all-girls public schools in Texas, making it the largest such network in the nation). It is the mission of the school to ensure that 100% of its students attend and graduate from college, ready to succeed in all fields, particularly: science, technology, math, leadership and wellness. Its motto is Girls Today, Women Tomorrow, Leaders Forever.

“We are proud to be the largest network of all-girls public schools in the nation with Irma Rangel as the foundation of our work as it was the first of its kind to open in Texas. The school’s leadership, the dedicated teachers and the hard-working students—including Sammie—contribute to the long legacy that make this school one of the top in the nation. The students’ hard work, dedication, perseverance and leadership against adversity and other obstacles make them successful. It’s even more remarkable when you consider that 82% of the Class of 2016 will be a first-generation college student.“