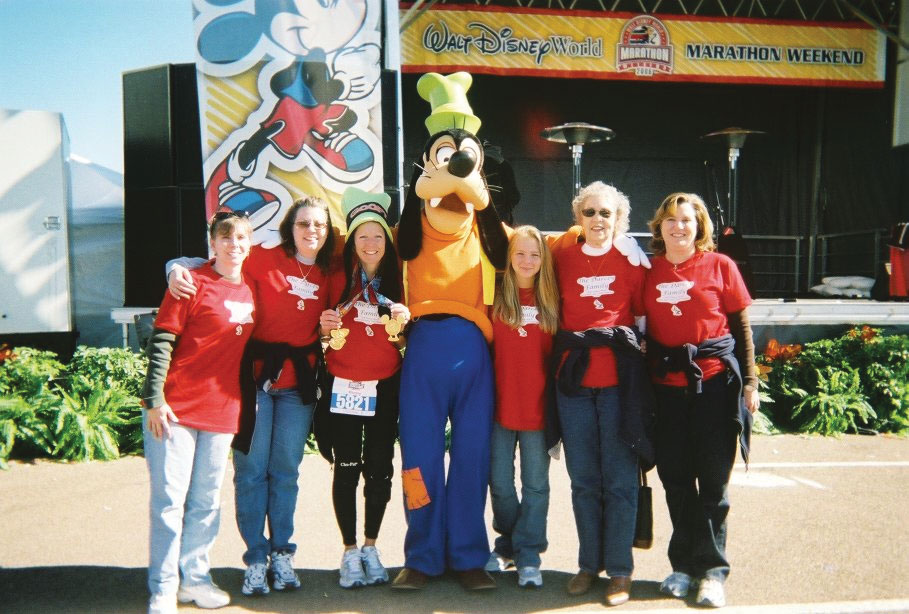 After losing her beloved brother to Lou Gehrig’s disease, one Plano mom found purpose in running.

What’s usually the first instinct when life gets tough? Most would say, “Cut and run.” In Ginny Selec’s case, the “run” part is literal.  When adversity came her way, Selec ran to face it, and 12 years later, she just completed her 50th marathon!

At age 40, Selec, a Mathews Elementary School 2nd grade teacher/team leader of 20 years, ran her first marathon in honor of a friend with non-Hodgkin’s lymphoma. Afterward, she told her husband Dan, “I’m glad I did it, but I’m never doing it again!” That changed one month later when her brother Trey was diagnosed with Amyotrophic Lateral Sclerosis (ALS), better known as Lou Gehrig’s disease. Selec ran the Inaugural Goofy Race-and-a-Half Challenge at Disney World in January 2006—her first race in honor of Trey. “What better place than Disney?” says Selec. “My brother loved Disney.”  Through pledges for her runs, Selec raised nearly $20,000 for Trey’s children’s college funds. It was a defining moment for her: from that point on she ran in her brother’s honor and eventually his memory. 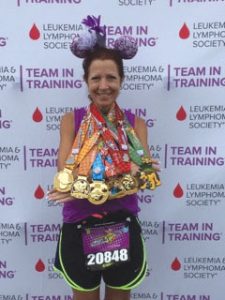 Selec now runs in Trey’s memory in races sponsored by the Leukemia & Lymphoma Society. This year she raised $8,400 and next year’s goal is $10,000. Since her first race, she’s completed three Dopey’s (a 5K, 10K, half-marathon and marathon in four days), 11 Goofy’s (a half-marathon and marathon in two days), 50 marathons, 53 half-marathons and many other races. Selec has run every Goofy race since its inception and earned the official Disney designation of “Perfectly Goofy.”  She ran her 50th marathon in New Orleans in February 2016, which she says was “very emotional.”

In addition to running for her brother, she also runs and fundraises for Autism-related causes, as her youngest son Caleb, now 18, was diagnosed at age 2. “I first asked why us, why our kid? Now I ask, why not?” says Selec. She says Caleb has been an influence on their other two boys, Tanner, 25 and Cody, 20; in fact their oldest son and their niece are studying to become speech pathologists. “Caleb’s such a blessing,” Selec says. “Every time I turn around, he’s teaching us a lesson.”

Yet, Selec and her husband still worry that Caleb will never be able to live on his own. Because of their concern for his future, Ginny and Dan cofounded the nonPareil Institute to educate and train young adults on the Autism spectrum in preparation for the workforce, with plans to build a supervised residential campus, so they can experience a sense of community (see related story here).

Through it all, Selec has remained strong and credits her strength to her mother, who raised five children on her own after Selec’s father was killed in a 1969 plane crash. “My mother taught us love, responsibility, forgiveness and perseverance.”

As for her efforts, Selec says, “It’s a great example for my kids and for my students. Life isn’t about getting; it’s about giving back. Not just money, but time.”

For her dedication to running races and never running out of hope, caring or motivation, and for helping others and her family, Good Life Family Magazine is honored to present this month’s V.I.P. award to Ginny Selec.

Our VIP (Very Inspiring Parent) Award honors the everyday, and not-so-everyday, heroes in our midst. Those whose tenacity, integrity and courage inspire others to exemplify the same character and put their families and community first, in spite of the challenges life has thrown at them. Good Life Family will present the recipient with an elegant crystal award and will make a donation to the charity of their choice. There will be one VIP award recipient in each issue of Good Life Family magazine and featured on GoodLifeFamilyMag.com.

CLICK HERE For complete details or to nominate or email Tricia@goodlifefamilymag.com.