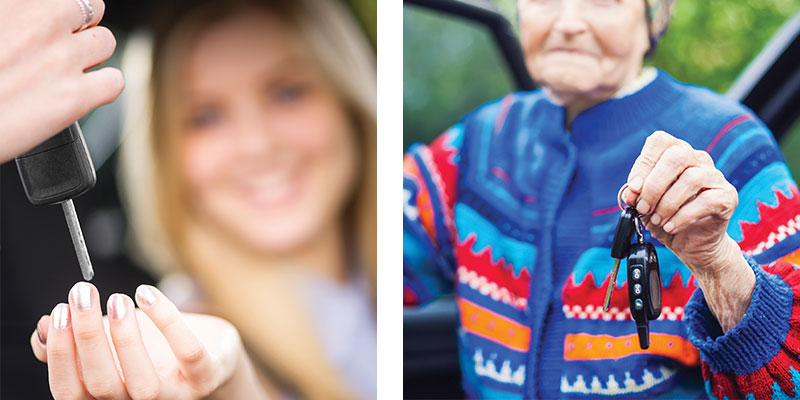 “Sandwich Generation” Parents Face the Worry at Both Ends

Driving is independence. The freedom to jump in the car and go where you want, when you want, is a privilege that is integral to the lifestyles we lead. When a teen gets a driver’s license, his or her world expands exponentially, but what about when they have to stop driving? In contrast to a teen driver’s expanding world, giving up driving for a senior can make their world seem much smaller.

Sandwich generation parents are often caught in between the two extremes; both giving the keys to their teens and taking the keys away from aging parents can be a tricky place to be. Local mom Tammy Komenda has new teen drivers, and she recently had to convince her father to stop driving altogether.  She says, “As part of the sandwich generation, you go from taking your kids to all academic and sports events to taking your parents shopping and to doctor’s appointments.”

Whether you’re the parent of a new driver or the child of an aging parent, it’s important to look at the situation from their point of view.  Mary Sanger, licensed marriage and family therapist, at Insights Collaborative Therapy Group explains what driving means for a teen. “For most teens getting a driver’s license is a milestone. It provides them with an opportunity to differentiate from parents in a more profound way. Differentiation from family is a necessary and important part of being a young person. It has to do with our ability to manage the natural desire we all have, to both be autonomous and also attached in relationships. Being able to drive gains teens more independence, freedom, and opportunity for making independent choices – all important components of autonomy.”

For elderly adults – it’s all that in reverse. To a senior, giving up driving is taking away that autonomy, and making that transition can be a very sensitive subject.  David Stanley of Custom Caregivers says “When we talk about ‘taking away’ something, we automatically create conflict.” After all, they’ve likely been driving almost their whole life. Stanley suggests, “We spend too much time ‘talking and taking’ rather than ‘listening and giving.’  Try to put the decision-making back in their court.”  Ask your parent how best to accommodate them during the transition and keep them safe at the same time.  “Taking away causes humiliation.  Creating understanding and accommodation is empowering,” Stanley reminds us.

How can we help a senior understand that giving up their driver’s license isn’t the end of the world?  Sanger says, “I think what’s important is for older parents to still know they have many ways to have a sense of autonomy. Driving is only one aspect of that. Encourage them to keep other responsibilities, such as coming up with the holiday menus or educating your tween on what a budget is. Remind them of other ways for them to have independence and freedom of choice.”

Resources like Custom Caregivers can be invaluable for a senior.  Stanley says, “We provide transportation services that help seniors regain some of the independence they feel that they have lost. We take people grocery shopping, to the doctor, to religious services, out for a meal, or even to social events. We can escort our clients anywhere that they need to go, either in their own car or in the caregiver’s car.”  Being able to assure the senior that they can still get where they need to go can alleviate their fears.

Getting where they need to go – safely. That’s the biggest concern whether you’re talking about a teen driver or an aging parent.

Are the dangers on the road really that bad?  For teens, they most definitely are. A recent article on teen driving in the New York Times quotes Dr. Nichole Morris, a researcher at the University of Minnesota,  “Among this age group (ages 16 to 17), death in motor vehicle accidents outstrips suicide, cancer, and other types of accidents.” Dr. Morris said, “Cars have gotten safer, roads have gotten safer, but teen drivers have not.” Curtis Howard, senior legal advisor to the Plano Police Department, gives the sad reminder that, “In Plano, our citizens are more likely to be injured or killed due to a traffic incident than being involved in a violent crime.”  Attorney Rob Chaiken, who is a specialist in complex civil litigation and serious personal injury claims, says “Teenage driving is the biggest threat and risk challenge out there for kids and families.”

Dr. John Saad, Executive Medical Director of Emergency Services at Medical Center of Plano, says “Clearly teens and elderly populations are at a higher risk of injury from motor vehicle accidents.”  Dr. Saad has seen that those dangers too often lead to injuries and, sadly, deaths. Teens have the lowest rate of seatbelt use, are more likely to speed, allow less room between vehicles, and are more likely to drive impaired. The elderly are more likely to wear seat belts, limit driving in bad weather, and are less likely to drive after consuming alcohol, but they are also more susceptible to injuries.  It’s their decreased vision, cognitive changes, and decreased reaction time that can lead to accidents.  “For teens, it’s behavioral; for the elderly, it’s physical,” says Dr. Saad.

OK, so we need to prepare our teen drivers for the road.  How do we do that?

In Texas, the graduated driver’s license program implements a two-phase process before teens get a regular adult license. Parents have the option of teaching the driver’s education material themselves or parents can look to a local driving school. Robert Chaiken reminds us that, ultimately, parents need to assess both the child’s technical competency driving, and also their maturity level and overall behavior to determine if they are ready to drive.  “Because in addition to what the law provides, parents need to implement their own set of rules and enforce them – such as hours of operation, geographic limitations, no cell phone use, music control, passenger limitations, drinking and drugs, etc.  If your child has demonstrated an inability or unwillingness to comply with your rules in other areas of day to day life, then it might not be time to let the child drive.”

Sanger agrees. “I think it’s important for parents to be talking with kids about the concept that with freedom comes responsibility. Help kids understand that we have a responsibility to keep not only them safe, but other people on the street and in the community safe.” She believes that if a parent has any concern about their teen’s ability to be safe on the road, especially any concern about alcohol or drug use while driving, they should lose the privilege of driving altogether.  Period.   Chaiken also reminds us that just because your teen has had a license for a while without any incidents does not mean that all is well.  It’s important to continue monitoring their driving habits.

It’s harder to prepare Mom or Dad to stop driving. Despite the difficulty, you don’t want to wait for something to go terribly wrong before the decision is made for them.  Sometimes seemingly drastic measures may be necessary.  When Marsha Holm’s family determined her mother should no longer be on the road, they called her doctor for assistance. When her mother went in for an appointment, the doctor called the DMV right there in front of her and told them her license should be suspended. That ended the discussion pretty quickly.

Susan Perry’s father moved to an assistive living center, and they told him he wasn’t allowed to take his car. She said that he asked about it for a while until she finally told him that they had sold it. By that time, he understood that he was okay without it.

Kristy Howard’s cousins could not get her aunt to give over the keys. One day her aunt was involved in a minor fender bender, but it destroyed the front tire and rim. Her cousins told the aunt that the car was totaled.  In reality, they had it repaired and sold it.

Not being straightforward with your parents may seem dishonest, but it can allow them to save their dignity somewhat.

Ultimately, what we want is for our children and our parents to be safe.  Making the right decisions about how to grant and take away the independence that comes with driving should not be taken lightly. Watching your kids grow and assume new responsibilities and having the privilege of taking care of the ones who have given so much to us are both reasons to celebrate.

Consider these five warning signs of an unsafe elderly driver to determine if it’s time to have a serious conversation with your mom or dad.  If it is, AARP has a wonderful on-line resource called “It’s Time to Talk.”

Find out if their auto insurance rates have increased recently or if they have received traffic tickets or warnings.

2. Damage to the Car

Check to see if the car has new dents or nicks.

3. Reluctance to Drive at Night

Pay attention if they are reluctant to drive at night, seem tense or exhausted after driving, or complain of getting lost.

Discreetly check in with friends and neighbors and ask if they’ve noticed any driving problems.

When you accompany your family member on an errand or an outing, encourage them to take the wheel and look for these signs of driving problems:

• Do they fasten their seat belt?

• Do they sit comfortably at the wheel, or do they crane forward or show signs of discomfort?

• Do they seem tense, preoccupied, or easily distracted?

• Are they aware of traffic lights, road signs, pedestrians, and the reactions of other motorists?

• Do they often tailgate or drift into other lanes?

• Do they react slowly or with confusion in unexpected situations?

Finding the Right Kind of Balance