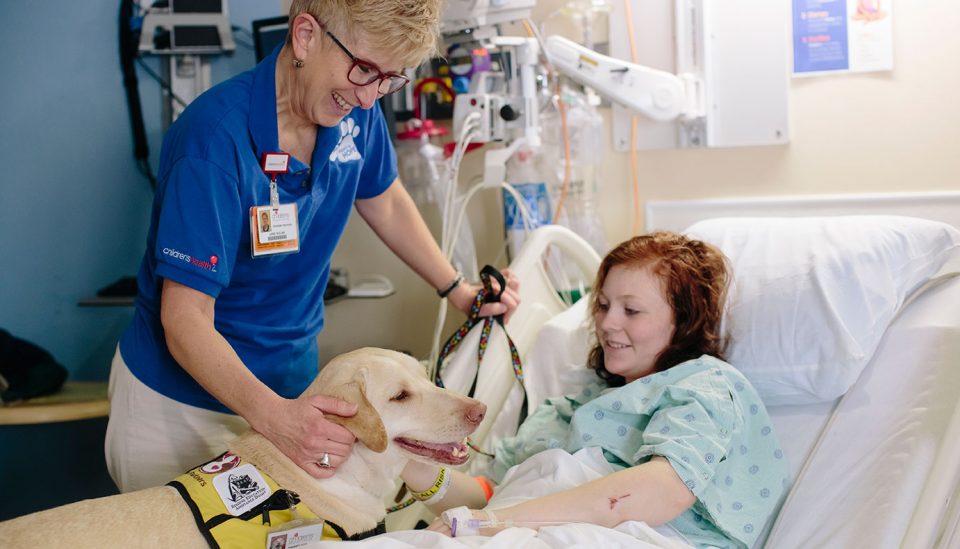 by Lisa A. Beach

Two years ago, a yellow Labrador named Maddie was an abused dog left on the side of the road with her ten puppies. They were taken to Canine Soulmates, a foster group in Hurst, and four-year-old Maddie got a second chance when her handler Jane Nolan adopted her.

Talk about making the most of second chances.  Rather than just living the good life in her new home, Maddie used this opportunity to help others. Maddie and Jane work together as a therapy dog team through Pet Partners, a national leader in animal-assisted therapy.

“I saw that Maddie had a really good temperament and a very kind heart.” explained Jane. “You can’t always find dogs that are mellow, sweet, and approachable.”

Dr. Brian Benjamin of the Ohio Drive Animal Hospital in Plano agrees that a good temperament is key for a therapy animal.

“A therapy animal shouldn’t have any trust issues.” explained Dr. Benjamin. “Plus, you can provide behavioral training so the animal will be patient, not afraid of loud noises, and not aggressive.”

To get her “working papers,” Maddie was evaluated and trained through A New Leash on Life, the McKinney-based chapter of Pet Partners. After a physical and behavioral evaluation, as well as six months of training in obedience, socialization, and manners, Maddie got the green light.

Maddie and Jane visit area hospitals, retirement homes, and other facilities where the healing power of animal-human interaction works wonders.  “We just help give a little bit of normalcy to the day and help them feel better,” says Jane, explaining how patients’ days are filled with tests, medication, needles, therapies, and exams.

“You can easily see the connection that people have with the dogs,” says Flora, who has been taking Sheldon on hospice visits three times a month for the past two years. “Some patients are nonverbal until the dogs visit, and then they start talking. Rehab patients with mobility issues will pet and brush the dogs. Even Alzheimer’s patients sometimes recall a pet they had from childhood.”

Dr. Benjamin also comments on the therapeutic effects that animals can have on people. “There have been studies done that show the simple process of petting a dog or hearing a cat purr can release endorphins that benefit a person’s state of mind.”

“One five-year-old boy in oncology had lost his sight and was feeling nauseous,” recalled Jane on a past visit to Children’s Medical Center in Dallas. “He was petting Maddie, trying to figure out what she looked like. I said, ‘Do you trust me and Maddie?’ He said, ‘Sure.’ And I said, ‘We’re going to play a game. You’re going to touch her and tell me what part you’re touching.’ After he figured out he was touching Maddie’s head, he said it felt like her heart because she’s so soft, and I thought that was so intuitive of him. It made him calm down and be more relaxed. It was a special moment.”

Think being a therapy animal is just for dogs? Think again. A variety of animals have the potential to serve as therapy animals, including cats, pigs, ponies, birds, guinea pigs and rabbits.

Contact these local chapters of Pet Partners for details: