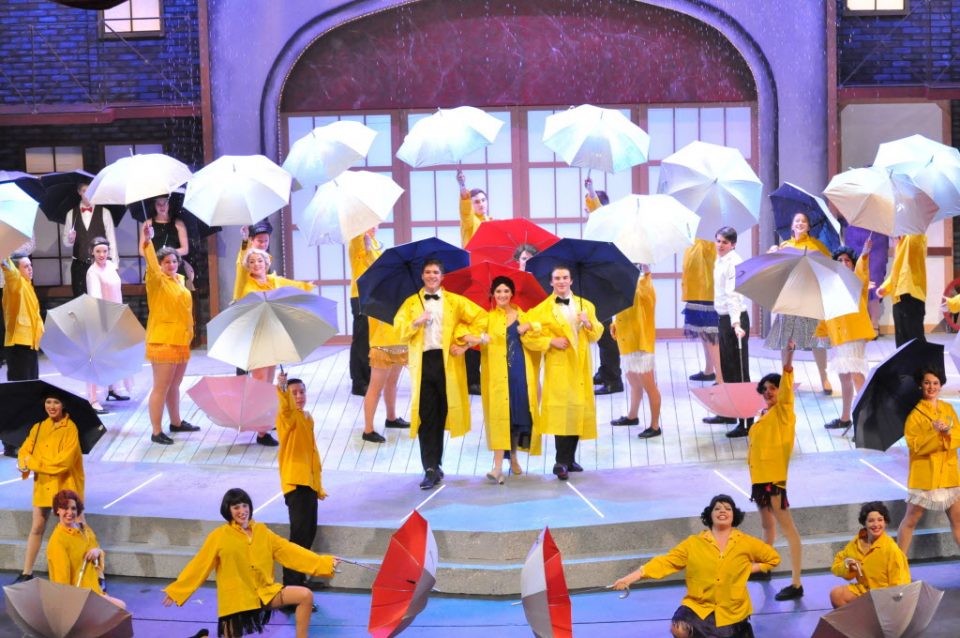 Michael A. Jenkins, President and Managing Director, Dallas Summer Musicals, Inc. (DSM); John R. Clutts, Chairman, The 5th Annual DSM High School Musical Theatre Awards (HSMTA) and Tracy Jordan, HSMTA Program Manager, announced the nominees for The 5th Annual High School Musical Theatre Awards on WFAA Channel 8’s Midday News and in The Dallas Morning News.
“We are thrilled to announce this year has broken all records for participating schools in HSMTA,” Jenkins said. “There are 67 schools participating showcasing 70 shows, representing 33 school districts across north Texas. Among the 67 are also 7 private schools. In addition, 6 schools have entered two musicals this year for the total of 70 productions which were evaluated. This represents a new all-time high of schools, teachers and students taking part in the program. This is more than double the first year’s total of 30 schools participating.”

Clutts agreed, saying, “Since DSM’s First Annual High School Musical Theatre Awards in 2012, this has truly developed into a regional program, accepting schools as far away as Denton and Allen to the north, Waco to the south, Abilene to the west and Paris, Texas to the east. It is exciting to be a part of this event and a witness to the enthusiastic and supportive response from the students, teachers and everyone in the community.”

The public is invited to join in the excitement of The 5th Annual DSM High School Musical Theatre Awards on Thursday, April 14, 2016 at the Music Hall at Fair Park. Red carpet arrival begins at 5:30 p.m. The show begins at 7:00 p.m. with performances which include separate medleys of the Best Actor and Best Actress nominees, production numbers from Best Musical nominees and an opening number featuring all nominated performers accompanied by a live orchestra. Winners and scholarship recipients are announced. The show is topped off with a finale of performers from each participating high school.

Longtime supporters Holly and Brad Reeves are Honorary Chairs and were recently honored by DSM at an event hosted by Neiman Marcus in the downtown Dallas location in the Zodiac Room. Holly is a member of the DSM Executive Committee, a Board Member and a 2015 Star of Touring Broadway Award recipient. She and Brad are Producer’s Circle members and former Curtain Call chairs. They often open up their lovely home for cast parties, inviting in up to 100 people for an after-show sumptuous buffet, hosted by the DSM Guild.

Hosting the awards show since its inception five years ago and again this year, Ron Corning of WFAA Channel 8 TV was also recently honored by DSM for his participation. His personality, humor and the sheer force he brings to the stage through his heartfelt enthusiasm for not only the awards ceremony, but the performers and their talents, adds a very entertaining element to the show.

Based on Broadway’s Tony® Awards, show business veterans, community leaders and celebrities will come together at The 5th Annual DSM High School Musical Theatre Awards to spotlight the achievements of high school students and their schools’ musical theatre programs.

As in the format of the National High School Musical Theatre Awards (the Jimmy™ Awards), the Best Actor and Best Actress winners will not be decided solely by standings. The nominees will perform the evening before the awards show for the assembled DSM judges and will be scored at that time. The winner will be revealed the next night at the awards show at the Music Hall.

Winners of the Best Performance by an Actor and Actress will receive an all-expense paid trip for five days to New York City to represent their school in the National High School Musical Theatre Awards (the Jimmy™ Awards) for the chance to win prizes and scholarships, which vary by year.
Michael said, “This program encourages participation in the musical arts throughout our community. We are grateful to founding sponsors Leah and Jerry Fullinwider for their support and vision, which literally brought this awards program to life.”

Created this year, the Fullinwider Award honors the Fullinwiders for their initial gift of $100,000 which helped fund and produce the High School Musical Theatre Awards and scholarship program in 2012. The award will honor a person living a life in the theatre at the national level whose roots, formative and educational years are in the Dallas theatrical community.

Tracy added, “DSM feels it is important to encourage these talented students to follow their dreams and goals and to draw attention to the excellent work being done in education in musical theater in our area schools. This is a wonderful opportunity for everyone involved and a great show!”

For questions, contact Tracy Jordan, the program manager at 214-413-3951 or tjordan@dallassummermusicals.org Facebook page is constantly updated at https://www.facebook.com/DSMHSMTA

Choose Your Own Package for any three DSM 2016 season shows, are now on sale online at DallasSummerMusicals.org and by phone at 1.800.514.ETIX (3849). They can also be purchased at The Box Office, 5959 Royal Lane Suite 542 Preston Royal Shopping Center. Tickets for 42ND STREET go on sale March 28.

The Healing Power of Pets