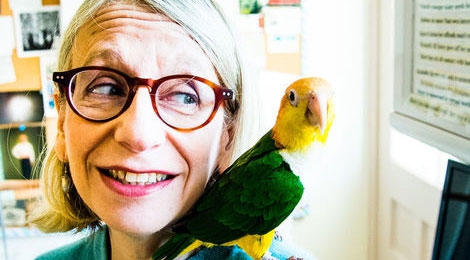 “Can’t We Talk About Something More Pleasant?” is the beautifully written story of one woman’s journey in navigating the world of caring for elderly parents while coming to terms with a less than perfect parent/child relationship. 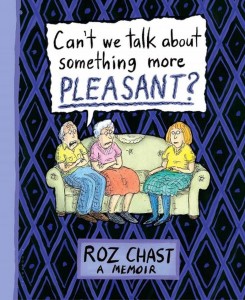 Roz Chast has written a memoir that is simultaneously hilarious and heart wrenching. The famous The New Yorker cartoonist tells the story of her aging parents’ final years through her beloved cartoons, family photos and documents along with her own candid narrative. Can’t We Talk About Something More Pleasant? will resonate with anyone who has dealt with aging parents and the tough decisions that must be made when the parent/child roles start to reverse.

Chast, an only child, had a difficult relationship with her parents. Her mother, Elizabeth, was an overbearing retired assistant principal who never showed Chast the love that she craved.  George, her father, was quiet and anxious (Chast describes him as a “chain-worrier”). While living under the thumb of a dominant wife, he never seemed to break free enough to establish a meaningful relationship with his daughter.

Chast left her childhood home in Brooklyn for college and did not return for a long time.  She states, “From 1990 to 2001, I had not set foot in Brooklyn ONCE. Denial, avoidance, selfishness, laziness, and the day-to-day busyness of my life (two little kids! cartoon deadlines! grocery shopping!) were all partly to blame. But really, I just didn’t want to. Then, one day, out of the blue, I had an intense need to go out to Brooklyn, to visit my parents. It was easy to remember the day because of the events that followed – September 9, 2001. A Sunday.”

What Chast found when she visited was that her parents were extremely frail and their living conditions reflected their inability to properly care for themselves. To complicate the situation, her parents refused to discuss any plans or what their wishes were in the event that something should happen to them – what Chast calls their aversion in general to the discussion of “unpleasant topics”.

After several falls, some health scares and many heart-to-heart talks, Chast finally convinced Elizabeth and George to move to “the Place” near her home in Connecticut. It was 2005 and they were both 93. Chast cleverly depicts life in the assisted living facility as “like the high school cafeteria, but with old people”.

George passed away first in 2007 and Elizabeth lived another two years. Chast skillfully depicts her heartache and regret when Elizabeth becomes attached to her full-time Jamaican aide, Goodie. Although Goodie was a godsend for Elizabeth, Chast couldn’t help feeling guilt at not doing “the dirty work”.

The book was a 2014 National Book Award Finalist and named one of the New York Times Book Review’s 10 Best Books of 2014.

Splurge or Save? Cover Your Bottoms!