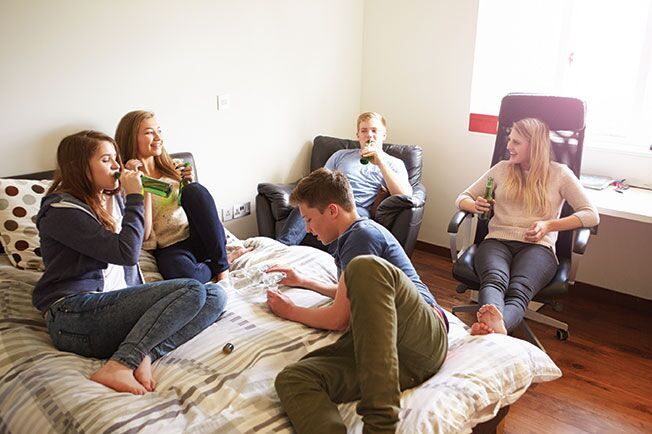 The Road to Substance Abuse: What Drives Your Teen?

The second in a three-part series on teen substance abuse, this article focuses on why tweens and teens are drawn to drugs and what parents can do to stop it.

You brought into the world the most perfect baby. You gave her everything and nurtured her to become the most perfect toddler, child and teen. So, why on earth would she start using alcohol or drugs? The answer may be closer to home than you think.

In some cases, it’s their own parents’, friends’ and other adults’ alcohol habits that teens emulate. According to Pam Blankenship, Executive Director of CARE (Chemical Awareness Resources & Education), a non-profit, confidential resource for families of substance abusers, “Teens tell us the number one attraction is peer pressure….sadly.” Blankenship explains, “They see what other people are doing. They see their friends and adults drinking and sometimes using other substances. In their minds, this is part of the normal teenage experience.”

Unfortunately, teens don’t realize that what they consider the norm for their age group is a very dangerous proposition. Misperceptions of the safety of marijuana use are one contributing factor to the increase in use among middle schoolers (Yes, tweens are not exempt from this trend, as their early use of alcohol may lead to use of marijuana. According to the CARE Dallas website, twelve years old is the current age most people start drinking alcohol, and that age has been dropping since 1965 [care-dallas.org]). “Students perceive the legalization and decriminalization of marijuana use as evidence of the safety of the drug.” (Tammy Granger, Christine Storm, Cory Trevena, Tina George and Cecily Crawl for Caron Treatment Centers, Dallas)

Carrie Stevens, Plano West Substance Abuse Counselor and founder of the drug education organization Collin County Substance Abuse Coalition (CCSAC) agrees that peer pressure has a role in drug abuse. “I ask teens ‘are you a leader or follower?’” She challenges the young people she meets with to see if they would buckle under pressure. In response to the claim that “everyone’s doing it”, Stevens says, “that’s a myth. Only the people you hang out with are doing it.”

Teens historically have wanted to appear “cool” and crave being accepted by the crowd. But Blankenship says there is another major factor that influences teens to abuse alcohol and drugs. “The second biggest reason is that teens use drugs as a coping mechanism. They turn to drugs to cope with a short term crisis or trauma in the home or as a means to combat depression or anxiety.” Blankenship says that CARE has found that many kids are over-scheduled as young children, tweens and teens and have pressures to be super kid, so they use drugs as a means of escape. “Too often, kids don’t know how to deal with stress or pressure in a healthy way, so they turn to alcohol or marijuana to cope.”

Stevens agrees. “It’s about escaping. Kids don’t want to “feel” when they have family or friends issues. They want to numb themselves from the feeling, but when they come off a high, the problem doesn’t go away. So they do it again and that’s how the spiral of addiction begins.”

There are many other reasons tweens and teens get on the drug bandwagon, including pop culture. “Kids hear how drugs are bad for you, but then they look around and see celebrities using them.” Stevens adds, “They want to make the decision themselves.” Counter to Blankenship’s example of over-scheduled lives, Stevens points out that some teens turn to drugs out of sheer boredom and look for something to hold their interest.

Some kids try drugs to experience euphoria, notes Stevens. “They think it feels good, plus, society has desensitized us. Just look at the media: there’s a pill for everything.” And that brings up another point; some teens use and abuse drugs to help them focus or to lose weight and deal with poor body image.

One other factor that could be making drugs appear attractive is Internet exposure. “With the age of electronics, availability and accessibility via the Internet, it makes it easier for kids to get information [about drugs].” (Tammy Granger, Christine Storm, Cory Trevena, Tina George and Cecily Crawl for Caron Treatment Centers, Dallas) Facts to support this supposition are:

So what can parents do? Stevens says communication is always number one. Parents should ask questions, since teens seem to always be one step ahead. “Conversations are key, but scare tactics don’t work. Set expectations and follow through on them,” she says. “Be aware and check up on their social media. Kids can actually hide some apps on their phones.”

In addition to monitoring the location of the computer in the house and the time spent online, parents should be on the lookout for the following abbreviations that kids use when parents are around:

Provides intervention and prevention services to children ages 7-12 who have been affected by a family member’s drug and/or alcohol abuse.

A confidential community-based organization and free resource for individuals and families who have a concern, question or need to look for help with substance abuse issues. CARE also provides chemical awareness education.

Free drug assessments and evaluations are available for teenagers.

A 30 day shelter for victims of domestic & dating violence. Outreach Branch – For women who are preparing to leave an abusive relationship or have left a relationship and do not need shelter.

Established in Collin Co. under the auspices of McKinney ISD solely for students coming out of drug treatment where recovering teens can live out their commitment to staying clean and sober.

Provides assistance to survivors of sexual assault through individual and group counseling for victims, friends, and family members, hospital accompaniment, and community

Offers support groups for adults & teens with a drug/alcohol problem.

Support group to help families and friends of alcoholics recover from the effects of living with the problem drinking of a relative or friend.

Support group for teens affected by the drug and/or alcohol use of a loved one.

Support groups for adults & teens with a drug problem.

Biblically based program that helps one overcome hurts, hang-ups, and habits.

Support for those affected by the destructive behavior of a family.