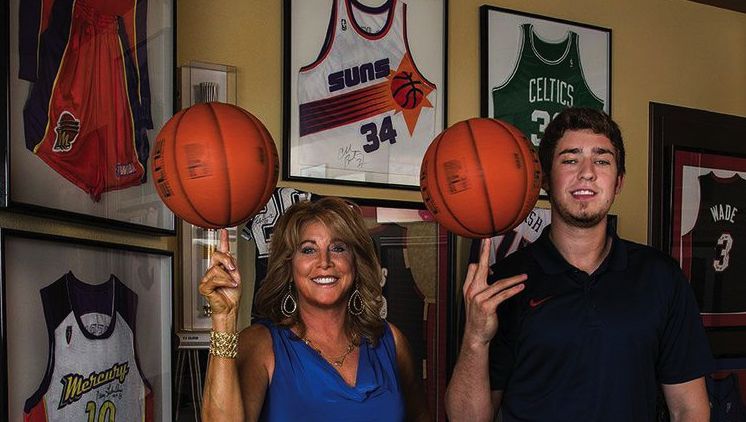 What more could a former two-time Olympian, three-time All American, two-time collegiate national champion and a two-time National Player of the Year at Old Dominion University, professional basketball player, head coach and general manager in the Women’s National Basketball Association (WNBA), Basketball Hall of Famer, sportscaster and accomplished author want out of life? 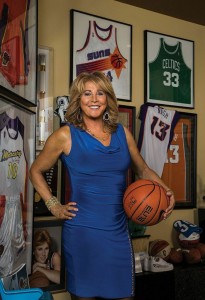 It is her actions off the court that have won Nancy Lieberman our VIP award. This amazing and multi-dimensional woman who started playing and excelling at sports at age 7, who took two trains all by herself to Harlem looking for a pick-up game (she heard the best players were in Harlem and she only wanted to play with the best) at age 11, and accomplished more than most people would only dream of, is a fierce advocate for children and the disadvantaged.

Lieberman’s philanthropic empire, the Nancy Lieberman Foundation, sponsors basketball clinics and camps free of charge for underprivileged youth, and Nancy leads each session. 2015 marks the 35th anniversary of the basketball camps. “At these camps, basketball is used as a tool to teach students valuable lessons such as staying in school, leading a healthy lifestyle, saying ‘no’ to drugs and alcohol, making positive decisions to achieve goals, and building confidence and self-esteem” (nancyliebermanfoundation.com). Nancy’s foundation also works with the Worldventures Foundation to build dream courts across the U.S. to give children a safe place to play, be healthy and feel good about themselves.

The passion for guiding children and helping the disadvantaged is rooted in her own childhood experiences in a broken home without much money in Far Rockaway, Queens, New York. “I was that kid,” says Nancy. “When I was growing up, my pencil holder was a brown lunch sack and my backpack was a brown paper bag. I was embarrassed and I know what it’s like [for these kids].” Her foundation provides backpacks for that very reason and gives kids computers to put them on a level playing field academically. Lieberman was also a recipient of others’ generosity, recalling in high school when she didn’t have the funds to fly to Albuquerque for the USA Team Olympic tryouts. “My school principal went door-to-door with a can and collected money from neighbors and complete strangers to pay for my flight.”

Lieberman feels that her contributions follow a logical progression. “The first half of my life, I was learning, then I was earning and now I’m returning,” she explains.

Of all the titles she has amassed, Nancy Lieberman’s most rewarding one is Mom. She is especially proud of her son T.J. Cline, a sophomore in marketing at the University of Richmond in Virginia, starting center for the Spiders basketball team and a new admit to the business school. “He’s forging his own career,” beams Lieberman. “He earned his scholarship and his starting job. He put time and effort into it and doesn’t take it for granted.”

Lieberman and her ex-husband Tim Cline instill altruistic values in T.J., and they parent him together. “T.J. is an amazing kid,” says Lieberman. “He knows that Tim and I have busy lives but we’re never too busy for him.” She also believes that kids who have support and involved parents will thrive. “Communication is the key to life, love, relationships, family and business. It’s not how you communicate in good times – it’s how you communicate in bad times. T.J. sees that and I admire him.”

T.J. credits his level of maturity to working at Nancy’s basketball camps. “It not only taught me about business, it taught me to always be on task because as Nancy’s son, I knew people were always watching me.”

When asked about her divorce and its effect on T.J. Lieberman admits that any time there’s a divorce, it will affect the kids. “What you can do is show kindness, class and dignity to the person you were married to. Tim and I don’t fight or argue; we just do the right thing for T.J.” She adds, “I like my ex-husband for all his values and for who he is. We’re not petty and T.J. sees this. It’s good for him to see he has two loving, respectful parents.”

Lieberman is happy to say that T.J. has been by her side in basketball since birth – literally. T.J. was born two days before Nancy was to receive an award in Chicago in July of 1994. “I promised them I’d be there. We all flew to Chicago and I brought TJ up on stage to get the award. We didn’t stay very long.”

As for T.J., he says he wouldn’t trade being the son of a basketball legend for anything. “It’s an experience most kids couldn’t even dream of – the things I’ve been able to do, basketball camp, the people I’ve met, the places I’ve been. But at the end of the day, what matters most is that I can sit on the couch and talk to her because she’s my mom.”

For her tireless devotion to making the world better for children and the less fortunate and for the examples she sets as an athlete, philanthropist and parent, Good Life Family Magazine is honored to present this month’s VIP award to Nancy Lieberman. 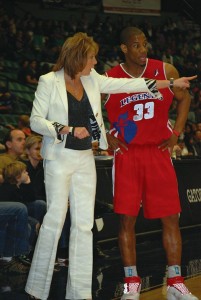 Nancy Lieberman was appointed as the first female head coach in the National Basketball Association (NBA) for The Dallas Mavericks’ D-League Team, Texas Legends. Nancy led the team to the playoffs in their first season as an expansion team. 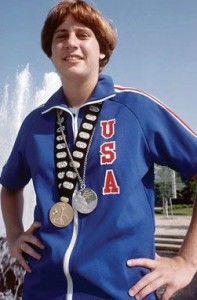 In 1975, Lieberman garnered one of 12 coveted spots on the USA’s Women’s National Basketball Team, catapulting her into the national spotlight. A year later, she brought home a silver medal at the World Championships (in South America) and a gold medal at the Pan American Games (in Mexico). At 18 years old, she earned a silver medal at the 1976 Summer Olympics in Montreal and became the youngest basketball player in Olympic history (male or female). 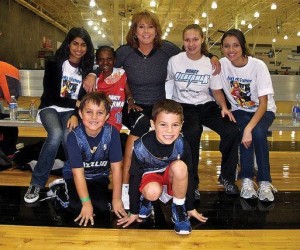 Educational scholarships are awarded yearly by the Foundation to student athletes who have excelled in as well as outside of the sports arena. Backpacks & Laptops For Love is another way in which the Foundation encourages academic perseverance and excellence.

The Nancy Lieberman Foundation will host their 2015 Dream Ball Gala fundraiser on April 16 at the Omni Hotel. Proceeds from the event will serve to further their mission to “provide a healthy physical, emotional and mental environment for young girls and boys to build their self-esteem and confidence so they will be able to make the right choices in the future”.

For more information about the Dream Ball Gala, visit www.nancyliebermanfoundation.com or see the Calendar of Events in this issue of Good Life Family Magazine.

Want to learn more about the VIP Award? Have someone to nominate? Click here for more information!