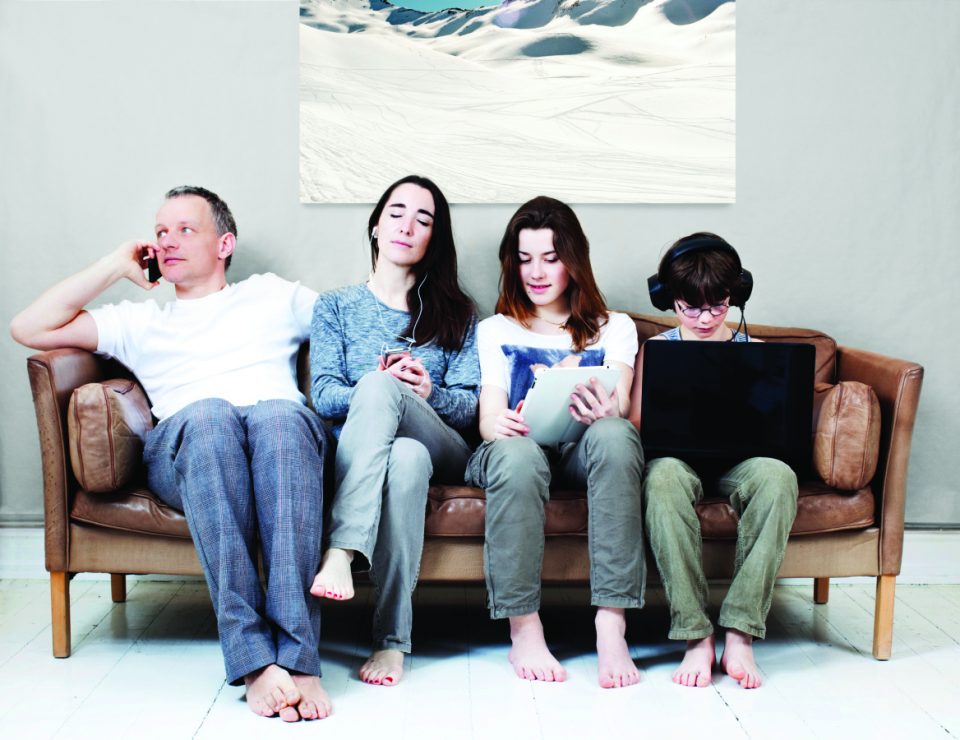 Can you hear me now?

Chances are when you were growing up, dinner meant the whole family sitting down together and talking about their day. Your parents insisted you all sat down together for dinner – and it turns out that research today has proven they were on to something.

Eating dinner together as a family has been shown to have emotional, cognitive and intellectual benefits. A 2006 study showed that traditional family meals have a positive effect on adolescent behavior and self esteem, and that kids from homes having few or no family dinners together have higher rates of substance abuse, eating disorders and other high-risk behavior.

Fast-forward to 2014. Chances are your family, if you are able to wrangle everyone to the table at the same time, each has a gadget or device at their side. Mom and Dad keep an eye out for urgent work emails. Teens and tweens are keeping an eye on tweets and status updates. Is technology effectively erasing all those benefits of traditional family dinners?

“Given that there are so few opportunities for families to gather, family dinner is the most important way to get together,” notes Anne Fishel, PhD, cofounder of The Family Dinner Project and a professor at Harvard Medical School. “It’s the most basic place for families to connect with each other and relax. Research has shown there are even benefits later on, such as lower obesity rates for young adults (who ate regular family dinners as teens) and intellectual benefits – talking at the table is even better than reading to young kids.”

For many families, balancing the lure of technology and family time during meals is a challenge. “Dinner is the only time we are technology free,” says mother of two Monica Sanchez from Dallas. . “We slowly transitioned to that. We used to eat in front of the TV sitting on our couches using trays, then we started sitting at the table while watching TV. And finally now, no TV. It’s our time to decompress and discuss our days.”

Galit Ziv Birk of Dallas agrees. The mother of two is also the owner of CORE Parent Coaching and has a PhD in clinical psychology. “Having clear rules and limits around media is so important for our kids, ourselves, and our families. It is something we all struggle with in today’s media/screen age and something that most of us could do better with. I always encourage my clients (and remind myself) that the best way to teach the importance of one-on-one connection and presence to our kids is to model it – no phones at the table.”

Another interesting fact research has turned up is that while parents roll their eyes at how addicted their teens are to their phones and tablets, it is in fact the parents who have the hardest time unplugging. Fishel recently found in a national survey she conducted that only 18% of parents think it’s okay for kids to use technology at the table, and double that number think it’s acceptable for parents themselves to do so.

However, Fishel points out, technology and the family dinner doesn’t have to be such a black and white issue. “Technology at the table signals you’re not interested and your attention is divided. To the extent that technology takes people’s attention away from each other, it’s not helping make a connection to others in the family, so we recommend a relatively tech-free zone. But we are also realistic that technology is part of everyday life. So think about more flexible rules, like you can look at your phone once during dinner and anyone who does it more than once has to do the dishes.”

Fishel also notes that technology can even be used to help families have conversations at the dinner table. “Someone might say, ‘Oh, I want to read you this email’ or ‘I want to show you a photo on Facebook,’ and that is in the spirit of connecting. Sometimes technology can enliven or deepen a conversation.” Keeping it in the spirit of connecting with one another is the key, she says.

And that’s worth texting your family about – along with tonight’s menu.

Parents weigh in on the topic:

“Technology can be mom’s best friend but it can also be a mom’s nightmare.”

“When we’re at the dinner table discussing current events with our kids, having access to real-time information through technology adds a valuable dimension.”

“Technology would show up to dinner whenever we sat down to eat until it got it’s ‘time out’ from our table! Everyone would feel the urgency to check that text, or for our boys, the latest scores on their NBA/ESPN apps… and if all are connected to the world-at-large, why make conversation at the dinner table? So though technology is welcome everywhere else, it is missing at our dinner table.”

– Pallavi Ahluwalia, mother of 3, from Plano

“When we are eating as a family we ban technology. Sometimes it is more of a problem for my husband than the kids!”

“Just like when it comes to raising kids in general, common sense seems to rule the day. Texting friends, posting on Instagram and basically what amounts to talking to people not at the dinner table crosses the line. But that does not mean phones are banned. Maybe we’re having a conversation and searching on the internet adds to the conversation. We might want to confirm a fact to make a point whether we’re talking about politics or the name of that first movie Brad Pitt starred in with Angelina Jolie. So if the use of technology enhances the dinner conversation then it’s a good thing. But if it’s used to avoid interacting with the family then phone privileges can quickly disappear.”

– Jay Leshefsky, father of one, from Plano

Have something to add to this story? We want to hear from you! Email Tricia@GoodLifeFamilyMag.com

Sheryl Pidgeon is the Founder and Editor-In-Chief of Good Life Family Magazine. She has been a Marketing Professional for over 30 years and is on a mission to inform and uplift parents of kids tweens - to - twenties, with needed and timely information.