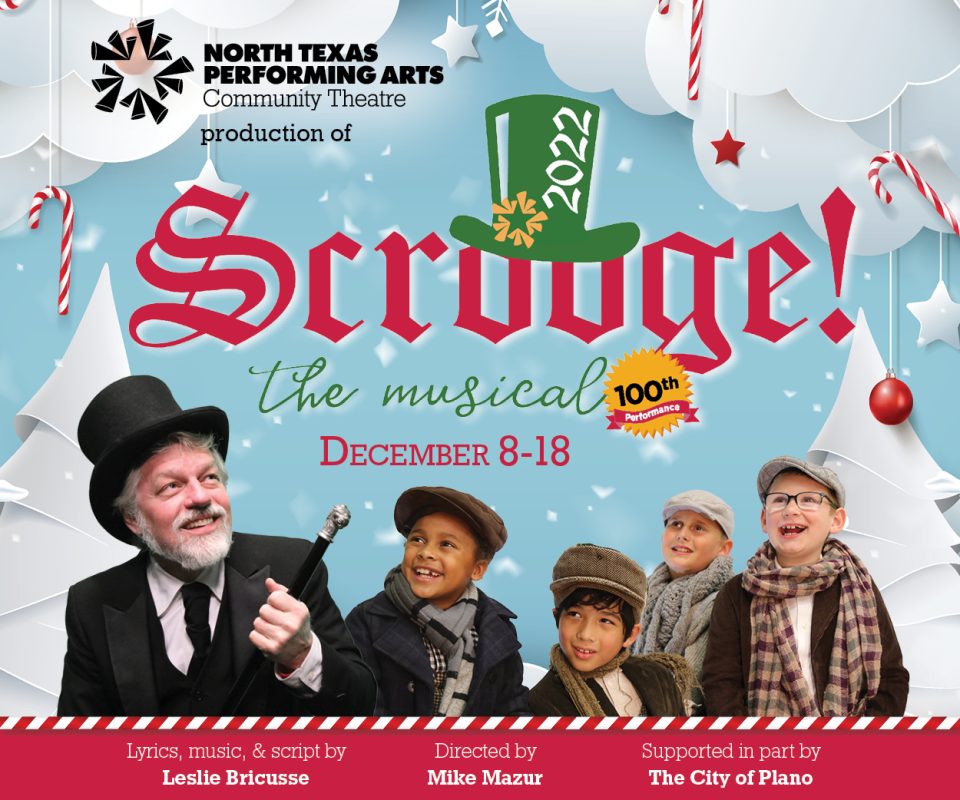 North Texas Performing Arts (NTPA) announces that closing night of this year’s run of its annual Christmas show will mark their 100th performance of Scrooge, the Musical for the theatre troupe and for Plano resident Darrell Rodenbaugh who has played the title role of “Scrooge” since the tradition began in 2011.

This year’s twelfth anniversary production of Scrooge, the Musical will feature almost 100 actors in the holiday favorite that has captivated almost 20,000 audience members for over a decade. Through the years the production has weathered the Covid-19 Pandemic, debilitating December ice storms, and a move to a new venue and through the challenges continued to take the stage.

The Annual “Scrooge” tradition began in 2011 as a theatre supporter’s “team-building” effort, and since that early start has consistently been one of the theatre’s largest annual box office hits and financial contributors to the non-profit.

“Most rewarding is when audience members tell us that they come back to see Scrooge year-after-year to get them into the Christmas Spirit,” says eight-time Scrooge cast member and five-time Scrooge Director Mike Mazur. “This year will be special with Darrell’s 100th bow. He has brought the role to life so many times, and each year he keeps it new, fresh and bigger and better than the year before.”

This year NTPA will again be offering two “Gift to the Community” performances, providing free tickets filling the entire house for two shows as a “Holiday Gift” to local veterans and underprivileged families.  Audience members will participate in pre-show carols, a special visit from Santa Claus, free snacks during intermission, and a post-show gift bag.

Those interested in sponsoring this invitation-only event or applying for participation should reach out to scrooge@ntpa.org.

This North Texas Christmas tradition has been critically acclaimed and described in a Dallas Morning News review as “brilliant … robust and passionate,” and the show continues to grow each year in its following and playing to sell-out crowds. The show regularly tops regional “must-see” event lists for the Christmas Season.

NTPA Scrooge casts historically have featured entire family participants and this year is no different with two-thirds of its cast related to another cast member. This year’s cast includes Cratchit parents with their own children playing Cratchit children, Young Scrooge and stage sister are real-life mother-son, and other heart-warming family relationships.

The first weekend performs at the historic Plano Courtyard Theater and closing weekend at Willow Bend Center of the Arts in The Shops at Willow Bend Mall.

For more information and showtimes go to ntpa.org/event/scrooge/.

Scrooge, the Musical is sponsored in part by the City of Plano. Scrooge! is presented by arrangement with Concord Theatricals.

North Texas Performing Arts (NTPA) is a 501(c)3 nonprofit dedicated to developing the character of youth through quality performing arts education and family entertainment. NTPA evolved from Plano Children’s Theatre founded three decades ago and is now the largest youth theatre organization in the country. NTPA is headquartered at Willow Bend Center of the Arts in Plano and has additional performance and educational spaces in Fairview, Frisco, Dallas and Southlake. Each year NTPA provides opportunities to more than 11,000 students ages three to 18 through its “Ten Characters” leadership development program. NTPA’s professional artistic staff uses theatre, dance, music, voice, film and TV to ignite a lifelong passion for the performing arts and guide young people on a path to becoming better citizens in our community and our world.