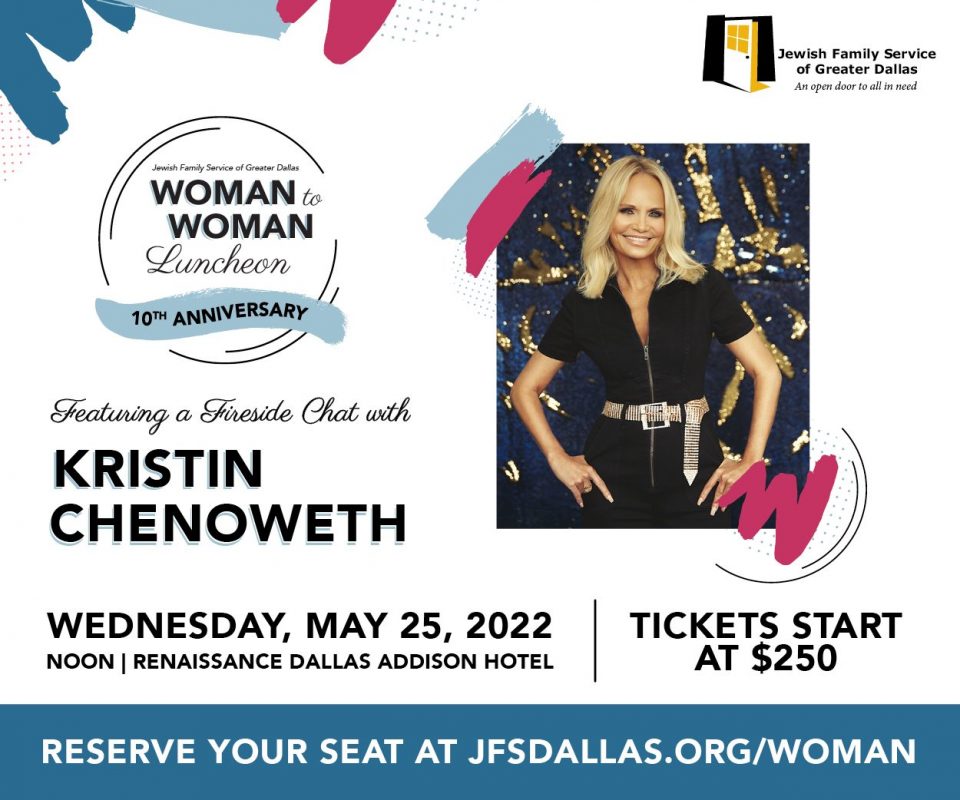 Emmy and Tony Award winning actress and singer Kristin Chenoweth will keynote the Jewish Family Service of Greater Dallas’ 10th annual Woman to Woman Luncheon on May 25, 2022, celebrating the power, influence, and impact of women.

Chenoweth is best known for her work on Broadway in hit shows such as Wicked, as well as her performances on television shows like The West Wing, Pushing Daisies, and Schmigadoon!

Founded in 2004 by Ethel Silvergold Zale, the Woman To Woman luncheon has raised $4,661,994 in support of 150 programs and services. JFS is an open door to anyone in need, regardless of religion, race, ethnicity or ability to pay.

“Your support of this event makes it possible to deliver our nationally accredited mental health and social services to the 39,000 individuals and families that turned to us for help last year,” says Linda Garner, Woman to Woman Legacy Chair.

When people turn to Jewish Family Service for help, they can rely on licensed professionals to make a positive difference in thousands of lives every year in an atmosphere of respect and confidentiality.

Woman to Woman takes place on Wednesday, May 25, 2022 at noon at the Renaissance Dallas Addison Hotel, 15201 Dallas Parkway.

This milestone year will pay tribute to all the past chairs of the event.

“We look forward to a wonderful 10th year celebration with Kristin Chenoweth and can’t wait to see you there,” says Ethel Silvergold Zale, event founder and Legacy Chair.

Kristin Chenoweth’s career spans film, television, voiceover and stage. In 2015, Chenoweth received a coveted star on The Hollywood Walk of Fame. In 2009, she received an Emmy Award for Best Supporting Actress in a Comedy Series for her role in “Pushing Daisies.” In 1999, she won a Tony Award for “You’re A Good Man, Charlie Brown,” and she was also nominated for her original role of Glinda the Good Witch in “Wicked” in 2004. Chenoweth has been nominated for two Emmy Awards and for a People’s Choice Award for her role on “Glee.” In 2009, she wrote an upliftingly candid, comedic chronicle of her life so far, “A Little Bit Wicked,” which debuted on the New York Times Hardcover Non-Fiction Best Seller List.

Chenoweth can currently be seen starring in the Netflix film “Holidate” and in Warner Bros.’s new adaptation of Roald Dahl’s creepy children’s book “The Witches” on HBO Max. Upcoming, Chenoweth will executively produce as well as star in the single-camera comedy series “The Biggest Star in Appleton,” which is currently in the works at Disney Plus.

Chenoweth also recently released her latest album, “For The Girls,” debuting at #3 on the Current Pop Albums chart and #11 on the Billboard Top Albums chart. The album is a heartfelt tribute to the great female singers throughout history, particularly some of Kristin’s heroes and friends. Guest artists include Ariana Grande, Dolly Parton, Jennifer Hudson and Reba McEntire. The album includes Chenoweth’s personally charged interpretations of classic songs identified with such iconic artists as Barbra Streisand, Lesley Gore, Linda Ronstadt, Dinah Washington, Dolly Parton and more. To celebrate the release of her new album “For The Girls,” Chenoweth returned to the Broadway stage this past November in an eight-performance concert engagement at the Nederlander Theatre.

Chenoweth has performed to sold-out audiences across the world, including performances at Carnegie Hall and Royal Albert Hall.

Chenoweth is a passionate supporter of charities that dedicate their time and efforts to helping those in need. She formed a charity partnership with the Broken Arrow Performing Arts Center (BAPAC) Foundation in her home state of Oklahoma. Chenoweth’s accomplishments were honored by her hometown with BAPAC naming “The Kristin Chenoweth Theatre” in 2012.

DRAWING WILL BE HELD LIVE AT THE RENAISSANCE DALLAS ADDISON HOTEL ON MAY 25, 2022

NEED NOT BE PRESENT TO WIN. ALL RAFFLE AND WINE PULL TICKETS SHOULD BE PURCHASED ON THE
GIVESMART PAGE AT JFSDALLAS.GIVESMART.COM

We’re celebrating our 10th Anniversary in style! For the first time in JFS history, we have designated 2,000 raffle tickets for a chance to win a beautiful 2022 Lexus RX 350* in partnership with Sewell Lexus of Dallas. Cruise around town in this luxury Eminent White Pearl SUV with premium interior upgrades knowing you helped provide transportation services to older adults and individuals with disabilities.

*The Raffle is only open to legal residents of the fifty (50) United States and District of Columbia, who are eighteen (18) years of age or older as of the date of purchase, and who are physically present in Texas when purchasing a Raffle Ticket (each, a “Participant”).  For Pool One (defined below), each Participant must possess a valid driver’s license.  Void where prohibited by law. Employees and contractors of the Sponsor, its subsidiaries, affiliates, employees, contractors, and advertising/promotional agencies, and the immediate families and household members of each of the above, are not eligible to enter or win. The Raffle is subject to all applicable federal, state and local laws. The Prize Winner is responsible for any and all federal, state and local taxes, fees and other government assessments on the applicable awarded Prize. Furthermore, the Prize Winner acknowledges that federal law requires that a tax withholding on certain Prize values must be collected by Sponsor from Prize Winners upon award or distribution. Federal and state withholding laws are subject to change without notice. The withholding laws in effect at the time each Prize is claimed will be followed.  For the Pool One Prize, the Prize Winner is responsible for all applicable taxes, tag, title, insurance and registration.

Shop ’til you drop and use this $1,500 gift card to handpick something fabulous.

WIN A GIRLS “GET AWAY” SPA RETREAT

An All-Inclusive Two Night Refresher Spa Package for two girlfriends at Lake Austin Spa Resort, nestled uniquely within the soothing Hill Country of Central Texas. Imagine starting your day with a yoga class on their lakeside dock, getting cardio in with their new hoop dance or learning how to hydro bike on Lake Austin. With nearly 20 activity options per day, these are just a few exciting and health-inspiring fitness options we offer. The package includes healthy gourmet meals daily, unlimited fitness classes, activities, discovery programs and a $1000 credit for services.

Enjoy an evening tasting a variety of Napa’s most sought after wines with the leading sommelier from 55 Seventy. The tasting can be hosted at 55 Seventy in Preston Center or your home. 55 Seventy is a private wine club reinvented! They offer exclusive memberships for collectors and social wine enthusiasts. The space features a climate-controlled storage cellar, champagne bar, large private dining room, tasting bar, and spacious patio.

Teens and the Cell Phone: The Pros and Cons and How to Set Limits