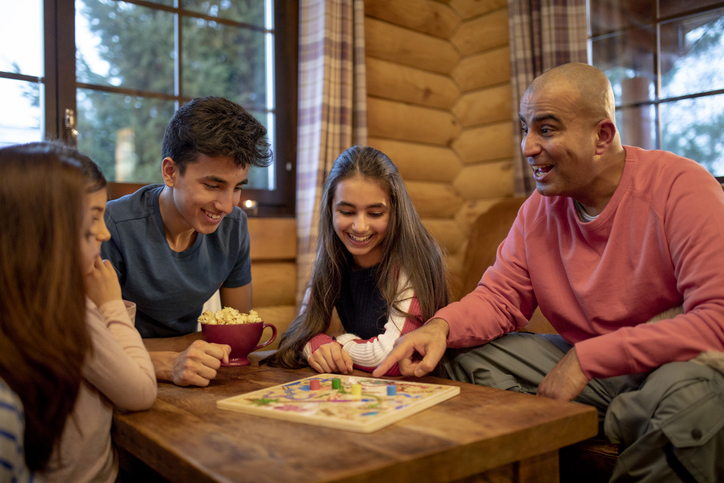 Our editors and writers are all-in for family game night! The friendly competition, the laughter, and just getting everyone to sit down together—we’ve gathered some beyond-the-classics games for your family to enjoy. Have fun!

Create crazy battles with scenarios beyond your wildest daydreams in this game, and win by using your most strategic or your zaniest tactics. You and another player each get a card with a character (ex. Abraham Lincoln, your Mom, or even a K-Pop Star) and one card with a crazy power or ability they get. It is your job to argue and convince the other players at the table which one of the wacky combinations comes out on top in a Superfight! Loads of combinations are possible, so this game can keep going as long as you need it to. These are the most fun arguments you will ever have!

Betrayal at House on the Hill (ages 13+)

Ever thought you would do better than the movie character about to make a dumb choice in a haunted house? Now you get to find out. Wizards of the Coast brings you this super customizable game that lets you build a haunted house tile by tile as you explore it with surprises waiting behind every door. There are 50 playable scenarios that change the goal of your characters every time you play, meaning you can play this game all day, and it never has to be the same. Are you brave enough to uncover the secrets of the House on the Hill?

Escape Room in a Box: The Werewolf Experiment (ages 10+)

Now may not be the time to take your family to your local escape room, but that doesn’t mean you can’t bring the escape room to you. What better way to bond than to work together to solve puzzles and beat the clock against a mad scientist trying to turn you and your family into werewolves? This immersive game comes with 19 physical and mental puzzles to stump you and your comrades. Put your family’s cooperation to the test and see if you can best the mysteries in this box. This one even connects to Alexa for extra features!

Get out your fans and lift your pinkies because this game’s about to get all kinds of fancy! This is a beautifully illustrated, bidding card game with a few twists. You can bid against the other players for items that will surely give you the social prestige you crave. However, don’t relax just yet, because there might be a few scandals that could tarnish that precious reputation you’ve cultivated. The player who has achieved the most prestige points through the items that they’ve won without going broke is crowned the winner and is at the tip-top of High Society, indeed!

We’ve all played Telephone and been baffled by what people wound up with after the words have gone ‘round, but what if you took that to a new level? Telestrations has people in a circle receive words that they then have to draw to the best of their ability in 60 seconds, pass to the next person, then that person has to guess the word that was drawn, and the next person has to draw what the last person guessed the original drawing was in their own way. Everyone passes until the books make it to their original places, and then the ludicrous miscommunications are revealed. No actual artistic skills required. In fact, it’ll probably wind up funnier if you don’t have them!

Are you a family of music lovers? Are you just shower singers? Doesn’t matter! Because in this looney game of tunes, you don’t have to sing it well. You just have to think of it faster. One player is the tunesmith tasked with timing and judging their fellow players. They have to say a trigger word, and the first player to score by saying at least 5 words of a lyric to a song that contains that trigger word rolls a dice to advance on the board. Look out! There are some board spaces with crazy challenges to complete, too. Shout it, sing it, whatever you need to do, but bring on the competition and the laughter with this award-winning game!

A fantastical labyrinth full of treasures ripe for the taking? Say no more! But, not so fast! This is no ordinary hedge maze. It’s full of traps, shifting walls, and mythical beasts to keep you and the other players on your toes. You must tread carefully and plot the most efficient courses to your bounty even as the landscape shifts around you turn by turn. Can you make your way to the prize before getting mired in labyrinth and before your competitors? Put your strategic mind to the test. It’s a different challenge every time you play!

More than 900 positive reviewers say they love breaking out this game, which can be played with up to eight people, at family gatherings. One reviewer calls it “the best game to have in your arsenal,” saying, “it’s fun for all ages and all group sizes. It is small and portable. I’ve been buying copies for everyone’s birthday this year!” A reviewer with a family of nine that ranges in age from 8 to 60 writes, “We really like it! It’s a great game that can be played with a large variety of people.” Others note how its simplicity makes it appropriate for all ages. “It can be taught in under five minutes and provides a ton of fun,” one reviewer assures. “It has definitely been a hit in my gaming group and with my family over the holidays.”

One reviewer says Double Ditto is similar to Scattergories. “The basic principle is that everyone writes down two responses to a game card,” another reviewer explains. “The objective is to choose answers that others may choose so that one (ditto) or both (double ditto) of your responses are also responses that other players wrote down.” This game can be played with just two people, but reviewers say the more the merrier. “I had a dinner party for six, and we played this after dinner,” one reviewer writes. “We laughed and laughed at so many of the questions. My company kept asking if we could play it just one more time and hours flew by.” Another says, “It is great for large groups — and you don’t have to sit around a table to play.” There are also 400 cards to play, so it’s nearly impossible to get through all of them in a night. One reviewer says this game is so fun that you will entice more people to join over time: “We went from four the first time, five the second time, and now we have played with no less than seven people each time we set it up to play.”

Abstract strategy games like Blokus are entirely based on the placement of their game pieces. That means there’s no luck or chance involved (unlike Battleship), so it’s nice for those who like to stay in control. “The beauty of Blokus is that the rules are incredibly simple so a young child can learn them quickly, in under two minutes, and yet the strategy and thinking levels needed to get increasingly better at this game are quite complex,” writes one parent. Another parent found it to be an “excellent game” for kids as young as 6, noting that there are “layers and layers of strategy,” and that it teaches “so many skills related to visual/spatial acuity, math, and strategy, all within a really enjoyable game.” Other reviewers liked that the games themselves are fairly short, often completed within 20 to 30 minutes, and can be played with two to four players. They’re so quick, “In a two-hour time span, we can average four to seven games,” writes one reviewer with a 15-year-old son and a 9-year-old daughter.

Shoppers looking for a family-friendly tile-laying game praised Tsuro highly. “I’ve played this game with my 5-year-old and my 10-year-old, and they both love it. It’s not a hard game to pick up, so if you’re looking for a game that the whole family can play, I highly suggest this one,” one reviewer writes. Players loved that you used tiles to build paths and that you could try new paths in each game. One shopper, who says this is a great game to “break the ice in a gaming-night event,” explains, “The game is a tile-placement game. Simple as that. Each tile has a set of paths on it. When you place a tile in front of your dragon marker, you follow the path you create.” And plenty of reviewers enjoyed the game so much they’ve played it again and again. “This has become a family favorite. It is also a game we know we can break out at any time, with any crowd anywhere, and have fun with,” says one satisfied shopper.

Prince John is coming to Nottingham! Players, in the role of merchants, see this as an opportunity to make quick profits by selling goods in the bustling city during the Prince’s visit. However, players must first get their goods through the city gate, which is under the watch of the Sheriff of Nottingham. Should you play it safe with legal goods and make a profit, or risk it all by sneaking in illicit goods? Be mindful, though, as the Sheriff always has his eyes out for liars and tricksters and if he catches one, he very well may confiscate those goods for himself!

In Sheriff of Nottingham, players will not only be able to experience Nottingham as a merchant of the city, but also each turn one player will step into the shoes of the Sheriff himself. Players declare goods they wish to bring into the city, goods that are secretly stored in their burlap sack. The Sheriff must then determine who gets into the city with their goods, who gets inspected, and who may have their goods confiscated!

Conspiracy Theory Trivia Board Game tests your knowledge of the world of Internet conspiracies. Answer questions to collect conspiracy cards to win, but be careful of Cover-Ups. A QR code is printed on every conspiracy card if you want more details (like when the ghost of JFK revealed that all dolphins are aliens). The perfect party game for 2 to 6 players (or teams).

Featured on the Tonight Show Starring Jimmy Fallon, Rachael Ray Show and more! It’s a hilarious game about crazy family members and even crazier situations—perfect for game nights with friends and family! Read a setup card aloud, like, “When my brother brought out his new baby to show the family, Granny blurted out…” Then everyone else chooses a punch line card to finish the phrase, like maybe, “You are not the father!” or “Somebody took a trip to the land of bad decisions.” And then the reader picks the funniest one to give that player a point, so you need to think about who the reader is and what they’ll find funny! Made and played by comedian Jeff Foxworthy.

Similar to the classic Charades but with a touch of ridiculousness and easy enough for kids and grandparents to learn—it’s the perfect multigenerational game for family game night. All participants split into two teams and take turns trying to guess words pulled from a bag. Hilarity ensues!

With age-appropriate toilet humor and funny innuendos for the adults, it can be enjoyed by all ages. The size and portability of this game make it great for camping, sleepovers, game nights, family gatherings, summer camp and even plane trips. Kids Against Maturity uses the tried and true fill-in-the-blank game-play, a perfect hilarious way to bring your family together.

The Gift of Being Present