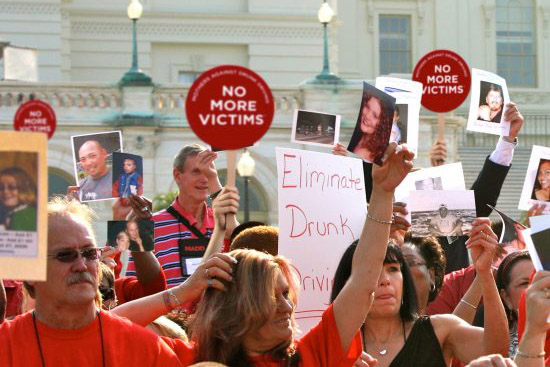 As Mothers Against Drunk Driving (MADD) turns 40 this year, it’s natural to reflect on the rich history of an organization built and sustained by victims of drunk driving, and more recently, drugged driving. Founded in 1980 by Candace Lightner, whose 13-year-old daughter Cari was killed by a repeat drunk driver, the national movement to change attitudes toward impaired driving and toughen laws has inspired thousands of mothers, fathers, brothers, sisters, sons and daughters to turn their anguish into advocacy.

I am one of those mothers. A teen driver impaired by alcohol and marijuana killed my daughter Helen Marie less than two months after she turned 16.

Until that day, my husband John and I had our dream family, a boy and a girl named for each of us. We had the perfect names: John and John and Helen and Helen Marie. Helen Marie because I did not want to be Big Helen or Old Helen.

Helen Marie was my firstborn. She put me through my mom paces. And she was quick—so quick we started calling her HM because you had to be quick to catch up with her. What fun we had!

When John arrived about three years later, Helen Marie was thrilled, until she learned he was there to stay. But she learned to love him, deeply. They were not perfect children, but they were well-adjusted, and this is all my husband and I had prayed for.

Our dream ended because one person decided to drink alcohol and smoke marijuana and get behind the wheel.

Driving under the influence of any drug, including marijuana and alcohol, can end in tragedy. Yet combining the two leads to even greater impairment—and increases the risk of getting into a crash more than using either one alone.

It was June 1, 2000. A warm, sunny afternoon in Miami. Helen Marie was nervous. She planned to direct a school play the next day. She’d acted in plays many times, but this was her first role as director. She wanted to go rollerblading to work off her stress.

I wanted her to stay home. But Helen Marie promised to stick to her regular route on the bike path and cross only at crosswalks.

I watched her skate off to the end of our driveway. She flipped around and blew me a kiss.

It was the last time I ever saw her.

Helen Marie was on her way home when she looked up and saw a speeding car spinning toward her—on the bike path.

From my porch, I heard the sirens. Thank goodness, I thought, Helen Marie is not in a car.

But when night fell and Helen Marie still wasn’t back, I knew something was wrong. My husband John hopped in his truck to go look for her while I waited with our son for news.

When a strange car pulled in my driveway, I think I already knew.

I cannot fully describe to you the days and months that followed. Making funeral arrangements for our 16-year-old daughter. Answering a call about body parts. Boxing up the things that held the essence of her. Standing in a criminal courtroom—a place utterly foreign.

As was the case for thousands of victims in the two decades prior to Helen Marie’s death, the women and men of MADD showed me I wouldn’t die from my grief. They gave me hope. MADD gave me a platform on which to lean and then to fight.

Today I represent the nearly one million victims MADD has served since 1980. I am their voice because I have to do everything in my power to end this violent, vicious crime. To spare one more family the pain I’ll carry for the rest of my life.

But we have so much work to do.

On September 4, the day before MADD’s official 40th Anniversary, we released results of a survey that revealed alarming attitudes toward marijuana use and driving. Forty years after MADD’s founding and 20 years after my daughter was killed, 41% of Americans surveyed said they are unsure or incorrectly believe that people who regularly use marijuana are generally not impaired, making it safe to drive. More than one-fourth of those surveyed recall a friend or family member driving within two hours of consuming alcohol during the past three months—and 12% have done so themselves. And 41% believe that driving under the influence of marijuana is safer than driving under the influence of alcohol.

One of the most astounding findings to me is that 43% of parents and grandparents say they never broach the subject of the dangers of driving while impaired by marijuana. Outside of alcohol, marijuana is the drug of choice for youth and is the leading cause of addiction. Previous studies have shown that about 1 in 5 young people report using marijuana just in the last month. By age 20, about half of young people have used it.

The call for MADD to once again attack lackadaisical attitudes, this time toward underage cannabis use and marijuana-impaired driving, could not be stronger.

More states are legalizing recreational marijuana use and the fictions surrounding the drug are growing: That it’s “natural” and therefore safe. That it makes you a better driver. That it isn’t addictive. The fact is that marijuana is not safe for developing brains. The fact is it directly affects parts of the brain responsible for coordination, reaction time, attention and decision-making—all critical skills for driving. The fact is that 1 in 10 people who use marijuana will become addicted to it, according to the Centers for Disease Control and Prevention. Research also tells us that 1 in 3 young people who drink alcohol have also combined it with marijuana. This poly-drug use—the same lethal mix that killed Helen Marie—is especially dangerous

While MADD is as dedicated as ever to eliminating drunk driving, which remains the number one killer on America’s roads, we are fully committed to educating, supporting research and standing with law enforcement to fight this emerging, growing threat. Until we defeat it. Until there are No More Victims.

This is what my daughter would have wanted. It is her legacy. And it is deeply gratifying.

Helen Marie’s death altered my life. In many ways, it has helped make me a better person. It has led me to where I am today, where we can measure MADD’s success by the 400,000 lives saved since 1980. But I would trade it all to have my daughter back.

Editor’s Note: Helen Witty is the National President of Mothers Against Drunk Driving.

About Mothers Against Drunk Driving (MADD):
Founded in 1980 by a mother whose daughter was killed by a drunk driver, Mothers Against Drunk Driving® (MADD) is the nation’s largest nonprofit working to end drunk driving, help fight drugged driving, support the victims of these violent crimes and prevent underage drinking. MADD has helped save more than 390,000 lives, reduce drunk driving deaths by more than 50 percent and promote designating a non-drinking driver. MADD’s Campaign to Eliminate Drunk Driving® calls for law enforcement support, ignition interlocks for all offenders and advanced vehicle technology. MADD has provided supportive services to nearly one million drunk and drugged driving victims and survivors at no charge through local victim advocates and the 24-Hour Victim Help Line 1-877-MADD-HELP (877-623-3435). Visit www.madd.org or call 1-877-ASK-MADD (877-275-6233).

The Affordable Luxury of Wine Rooms