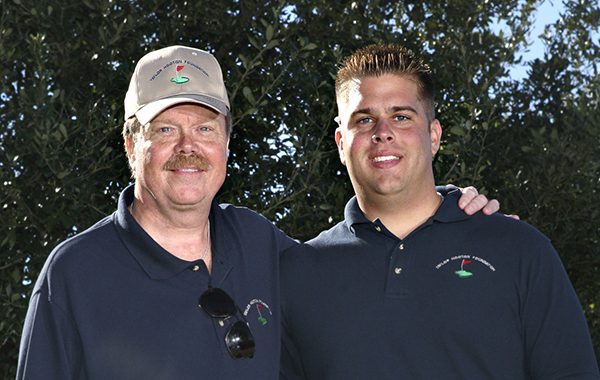 The course of your life can change directions in an instant.  In July 2003 and in his senior year of college, Donald Hooton, Jr. was preparing to start a career with his business degree.  That’s when he got the call from his sister that their 17-year-old brother Taylor had passed away.  In the midst of their grief, his family could never have predicted how, through their tragedy, they could impact the lives of so many others for the better.  Now Donald works every day to honor his brother’s legacy.

Donald and Taylor were five years apart and were always close. After Donald headed out-of-state to college, the two had time to connect during long talks over the phone.  When Donald was home, the two athletes would often spend time together in the gym. They had really become not just brothers, but friends.  Just before Taylor’s death, the family had gone on a trip to Europe, and they’d had even more time to just hang out together.  When Donald got the call that Taylor had died, he collapsed in the hallway of his apartment, then packed the same suitcase he’d just unpacked from their European trip and headed back to DFW in shock.

What shocked their family the most was that Taylor had committed suicide.  All of the family had just one question.  Why?

It was the detectives who found the steroids in his room.  At that time, the Hootons didn’t see the connection, but they’ve learned.  They’ve learned about steroid use and its psychological effects, and the link to suicide. And they learned the use of steroids is likely far more pervasive than you ever imagined.

Donald knew some about steroid use; after all, as a college athlete, he estimates that as many as 75% of his teammates had used steroids at some point.  He even had had an indication that Taylor was.  On that Europe trip, Donald could see he had gotten bigger, and he told Taylor how good he looked.  Taylor even said he’d been feeling “aggressively depressed.”

Weeks after Taylor’s death, his devastated dad, Don Hooton, Sr. spoke to about 600 students at Plano West Senior High School, where Taylor had been a student.  Taylor’s story was told in an article in the Dallas Morning News, then by the New York Times, and then on 60 Minutes.  Then, 15 years ago, Don spoke to Congress.  No one seemed to know how prevalent steroid usage was (and still is). Steroids can be found in tainted dietary supplements due to loose regulation—about 25% of dietary supplements contain some type of banned substance.

The Taylor Hooton Foundation was born out of Don Sr.’s commitment to spread the message about appearance and performance-enhancing drugs and to try to prevent other families from suffering the same tragedy he had.  Donald knew early on he wanted to be a part.  He started helping with a golf tournament to benefit the foundation in the early 2000s and attended programs with his father.  He worked in real estate for a while but came to work full-time for the foundation as Director of Education Programs in 2010 and became President about two years ago with the aim to expand the scope of their mission and the programs they were offering.

Under Donald’s leadership, they’ve expanded from 12 school programs each year to over 250. They’re expanding their messaging to include not just anabolic steroids but dietary supplements.  Donald points out that approximately 25% of those supplements will include banned substances. They’ve incorporated new fundraisers.  Big-name speakers like former baseball commissioner Bud Selig and former MLB pitcher CJ Wilson are participating in their newest endeavor, the “All Me” podcasts.

Donald says, “These podcasts give a platform for people to learn through people sharing their stories and their expertise.”  These speakers believe in the mission of the Taylor Hooton Foundation.  Bud Selig himself said, “Taylor’s story and the Congressional hearings changed Major League Baseball forever.”

Donald thinks about his brother every day.  “I hope he’s proud of the work we’re doing and what his legacy has become and how many lives have been saved,” he says.  “I hope every time his story is shared it’s making a difference.” Ultimately, Taylor’s legacy has become Donald’s too.

Editor’s Note: The Taylor Hooton Foundation is the leader in education on appearance and performance enhancing drugs. To schedule an ALL ME® Assembly Program at your child’s school or to learn more about the Taylor Hooton Foundation or the ALL ME® league, visit www.taylorhooton.org or www.allmeleague.com. The foundation’s 6th Annual All-Star Gala will be held Saturday, June 13, 2020. For tickets or sponsorship, contact Amy Wagner at 214.699.8297.

How Does Your Garden Grow?