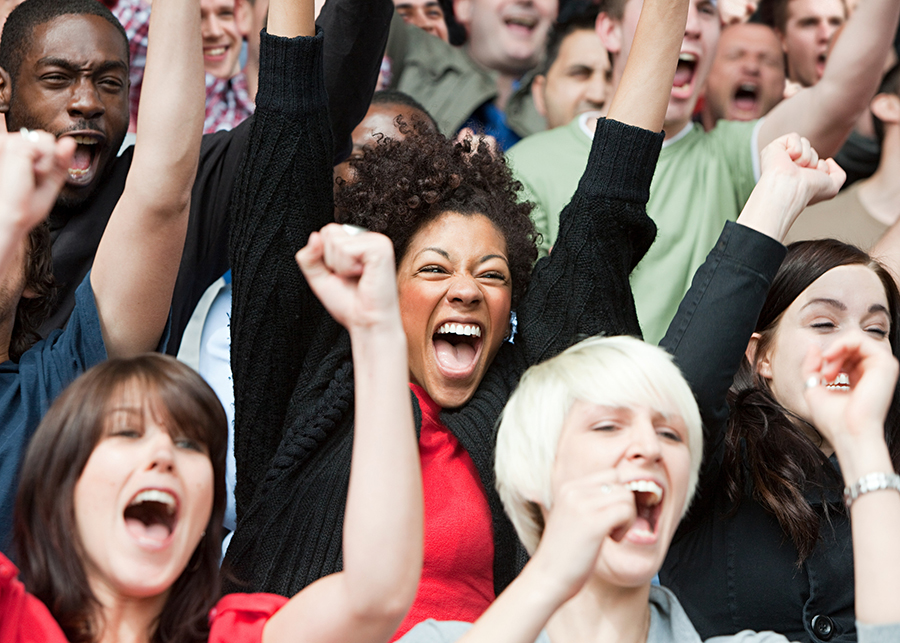 One of the advantages of living in or near a major metropolitan area is access to professional sports.  Dallas-Fort Worth is one of only nine cities in the US with franchises for all 5 major sports leagues (NBA, NFL, NHL, MLB, and MLS).  Miami will join those ranks next year.  Texas Legends President and GM Malcolm Farmer believes that having these great teams “sets the table for creating a culture for fans to enjoy a real sporting experience.”  We rally around our hometown teams for all kinds of reasons. We like to feel connected to something big, we celebrate with the team when they win, and watching the games is an escape for a couple of hours.  You don’t have to be a die-hard sports fan to enjoy the concessions, the fanfare, and the excitement.  It’s even better when they win. 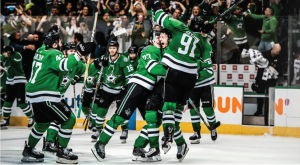 Dallas Stars
When the Minnesota North Stars came to Dallas and played their first game as the Dallas Stars in 1993, the franchise was probably wondering if hockey could prosper down here.  Dallas fans have certainly proved they can support a hockey team.  Early games focused on educating the hockey novices in the arena through videos explaining what the penalty calls meant.  Fans don’t need explanations anymore.  Stars fans have made them one of the most successful sports franchises in the city.  The team has made 14 postseason appearances and captured eight division championships, two Presidents’ Trophies, and of course the Stanley Cup in 1999.

Shannon Flohr and her husband Austin had one of their first dates at a Stars game.  This is a couple who loves the team.  “The atmosphere at American Airlines when the Stars are playing is something I can’t even explain. When I’m there, it feels like home. Other than home, it’s my favorite place to be,” she says.  Shannon is a teacher, and all of her students know how much she loves the Stars.  She even has a Stars area in her classroom to show off all her team “swag.”  She’s been known to keep the students up-to-date with the team’s playoff standings with daily updates on the whiteboard. 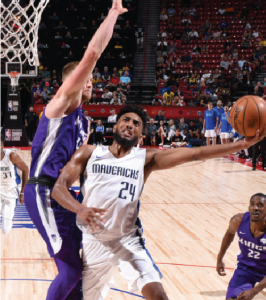 Dallas Mavericks
When the NBA announced in 1979 that they’d be expanding to Dallas for the 1980-81 season, they expressed concern that Texas could support three basketball teams.  No concerns now. At one point, the Mavericks had the longest running sellout streak in North American major league sports.  Of course, real fans just call them the “Mavs,” and any Mavs fan will tell you the biggest highlight was when the team won the National Championship in 2011.  You also can’t talk about the Mavericks without talking about Dirk Nowitzki.  His retirement at the end of last season ended a 21-year professional career with one team and marked him among the sport’s elite players.

For Lovejoy high-schooler Garrett Larson, the fast pace of the game drew him to the sport.  “I love watching basketball because the play never stops—it’s always continuous action with constant scoring,” he says.  He’s been a Mavs fan since he was just a little guy and remembers cheering them on during their 2011 run.  His favorite memory?  “Watching Vince Carter hit a fade-away three pointer to win a playoff game against the Spurs,” Garrett recalls.  He loves when his mom scores tickets to the suite from her firm. 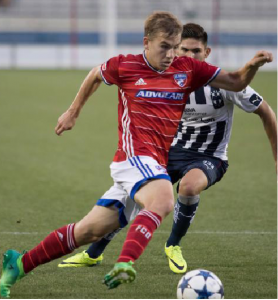 FC Dallas
FC Dallas is the newest of the DFW major sports teams, and with the growing popularity of soccer in the area, many felt it was about time the area had a professional team when, in 1996, they started as the Dallas Burn. The team plays March to October at Toyota Stadium in Frisco, which also houses the National Soccer Hall of Fame.  Their annual Freedom Fest game on 4th of July with fireworks is usually to a sell-out crowd. FC Dallas was named MLS Western Conference Champions in 2010 and Western Conference Regular Season Champions in 2006, 2015, and 2016.

Evan Martinez has been a fan since he started training with the FC Dallas club at age 6.  Now, in 9th grade, you’ll often see Evan in FC Dallas gear as well as in jerseys of his favorite players and teams from around the world.  He knows soccer has a long way to go to be as big as it is in other countries, but he believes there’s a growing passion for soccer in the area.  “For a long time football, baseball, and basketball dominated Dallas, but soccer will soon be a strong rival,” Evan says.  His favorite player for FC Dallas is midfielder Paxton Pomykal.  According to Evan, “It’s hard to take your eyes off the 19-year-old. It is great to see that a young athlete can keep up with players who are older and have more professional experience.” 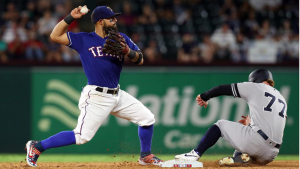 Texas Rangers
There’s something nostalgic about being at a baseball game.  Eating hot dogs, singing at the seventh inning stretch, and waiting for the crack of the bat bring back memories for anyone who’s ever been to a game whether you’re a big baseball fan or not.  The Texas Rangers have had some disappointing seasons, but they’ve created a lot of great memories for fans since their arrival in Arlington in 1972.  With the opening of the new Globe Life Park in 2020, the team is hoping to usher in a new generation of MVP’s like Nolan Ryan and Josh Hamilton and maybe even the ever-elusive World Series win.

Lindsay Harding calls baseball the “ultimate experience,” and the reasons she loves the game go well beyond enjoying seeing a few home runs. She says, “Baseball… has my heart.  The mentality while playing baseball is like no other.  You have to know what will come next, after an error, what to do when the ball goes where, and so much more.  It is a sport that shows you how to overcome, be a team player, learn from your mistakes, and to never give up. That next hit or out could change the outcome of the game, just like in life.”  Since her first game at age 10 with her dad, she’s been a Rangers fan.  “DFW has too big of a fan base not to have an MLB team.  Who are we going to cheer for if they don’t? The Houston Astros?  That’s a 4 ½ hour drive.” 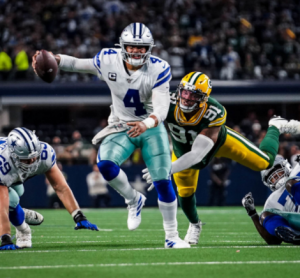 Dallas Cowboys
“America’s Team” has the longest history of today’s major franchises in DFW by far, having been in Dallas since 1960 where they were initially called the Dallas Steers.  They’ve made eight Super Bowl appearances and won five titles, but the last win was in 1995, and fans are ready for another one.  Some of the biggest names in the NFL have played for the Cowboys including Roger Staubach, Emmitt Smith, and Tony Dorsett.  They have the most recognizable cheerleaders, generate the most revenue of any NFL team, and arguably have the most outspoken owner in Jerry Jones.  How ‘bout them Cowboys?

For Cowboys fan Amber Ostrander cheering on the team is a family tradition.  She goes to the games with her brother and her dad, and her favorite memory was hosting a Turkey Tailgate at the stadium on Thanksgiving. “Most people in DFW root for the Cowboys.  I am in sales and for years I have said it is easier to cold call in Dallas after the Cowboys win!  Everyone is so happy.  It is pride for our hometown team that is important! I love seeing people wear Cowboys attire everywhere I go, especially when traveling to other cities.  It gives us an immediate connection.” 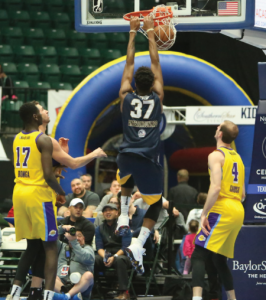 Texas Legends
DFW is equally lucky to have so many minor league teams in the area. These local teams often give the fans a much more close-up (and more affordable!) view of the action along with events and activities that cater to families, right in your own backyard.  North of the metroplex, the Texas Legends games have become a favorite destination for my own family. With four kids eight years apart, it’s always been a struggle to find one activity that everyone enjoys. Cheerleaders greet you as you come in, and there are always bounce houses, games, and tables set up with activities around the upper deck. The younger kids enjoy hanging out during the game on the court with Generous George. He’s got hula hoops, trampolines, and prizes.  The older ones like watching the cheerleaders, trying to get on the big screen or win giveaways, and actually watching the game.  There have been some amazing half-time shows with local performers, and our whole family was privileged one half-time to see an artist present a portrait he’d made of a local soldier who had died in battle to his family.  After the game, families can go on the court to talk with the players, and my kids have also participated in basketball camps with the Legends staff.

Texas Legends co-owner Donnie Nelson has said he counts his role with the organization as “one of the greatest things I’ve ever done in my life.”  The Legends are celebrating their 10th year this season and are excited to have named new head coach George Galanapoulos and former Maverick Jason “Jet” Terry as assistant general manager. Texas Legends President and GM Malcolm Farmer says, “At the Legends, we strive to bring the community together.”  He loves that the organization has the opportunity to highlight the great things going on in North Texas as part of the game. He believes it’s pretty rare when all members of the family can enjoy one event.  He says, “Hopefully they’ll leave having laughed and smiled and created a memory.”

“Tech the Halls!” Perot Museum of Nature and Science Celebrates the Season with a Reimagined Technology and Engineering Exhibit Hall, World-Exclusive Exhibition and More