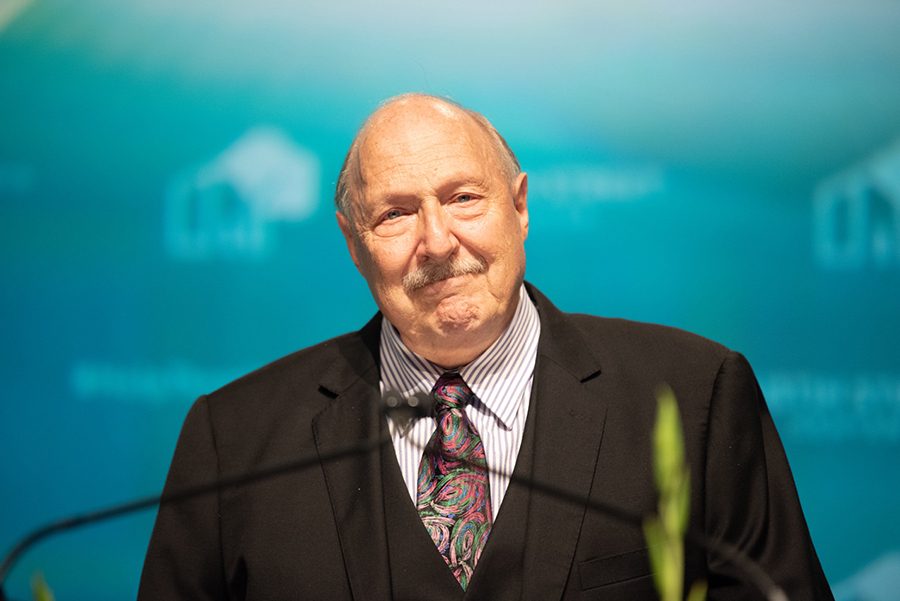 Norm Hitzges: Talking the (Sports) Talk and Walking the Walk to Make a Real Difference

Norm Hitzges is a sports legend.  He may not have racked up a list of achievements on the court or the field or the track, but as the longest running sports talk show host in any major market in the U.S., his impact on sports in DFW, and nationally, over the past 45 years is legendary.  Known for his straight-shooting style and meticulous analysis, Norm pioneered the world of sports radio when he hosted the country’s first all-sports morning drive show back when fans could only get sports news in a small section of the local newspaper and a few minutes on the evening news.

Long-time listeners to Norm on KTCK “The Ticket,” look forward to his predictions, breakdowns of the big games, and news about the players, but they also know him for Normathon, the annual 18-hour marathon to raise funds for the area’s homeless benefiting Austin Street Center. Since its inception the event has raised $5.6 million for the nonprofit and made an immeasurable impact not only on the individuals serviced by the shelter but also on the Dallas community as a whole.

Norm first became familiar with the shelter in the late 1970s.  Austin Street is a comprehensive homeless shelter that sleeps over 300 homeless each night and provides medical assistance and job training to help move residents out of homelessness.  In 2001 when Norm was talking to his producer Mark Freeman, he said, “How can we use the platform given to us to do good?” and Normathon was born.  The first year Norm stayed on-air 24 hours straight and raised $52,000.  “We were blown away,” Norm says.  Little did they know then how big the event would grow.  “When you have a large personal listening base and the base responds, it just snowballed,” said Norm.

Held the day after Christmas every year, the now 18-hour event is held at Starpower in North Dallas and also includes car raffles and the 12 Days of Christmas auction leading up to the big day.  Listeners have contributed services, clothing, furniture, and toiletries to the shelter as well.  Norm was thrilled when the event raised $300k in a single day, then $400k, then $500k, and last year thanks to one very special gift they raised $831,000 in those 18 hours.

“To watch Norm in action is truly amazing,” said Starpower CEO David Pidgeon. “The respect and admiration he gets from all the athletes and celebrities who come out to support the Normathon is an incredible thing to witness.  His heart to do good is as legendary as his voice.”

In May, Norm was presented with the inaugural Norm Hitzges Distinguished Service Award at the annual Austin Street Center Humble Beginnings luncheon. “It was no question that we honor our longstanding supporter and friend Norm Hitzges,” said Daniel Roby, Executive Director, Austin Street Center. “Norm brought a new voice to sports broadcasting around the same time Austin Street Center opened its doors, and because of Norm’s support and vision, we have been able to help thousands of individuals.”

Norm’s generosity to Austin Street and other nonprofits along with his outstanding career achievements have not gone unnoticed by the DFW community.  The Texas Radio Hall of Fame member has received the NFL’s Distinguished Texan award and been honored by the Texas Baseball Hall of Fame and the Dallas All Sports Association, among others.  In November, he will be honored by the Dallas Historical Society as a History Maker at their Awards of Excellence luncheon to celebrate those who have made significant contributions to the city’s quality of life.

“His career has bestowed on him the opportunity to share with our community some of the most important sports moments in the DFW Metroplex’s history. This has formed him into an overall sports historian. Norm has made history with his 40-plus years continuously on sports talk radio and has used his substantial audience to benefit many nonprofits and charitable causes in our area,” says Karl Chiao, Executive Director of the Historical Society.

His accomplishments over his lifetime are even being made into a documentary coming out in November by Bart Weiss, producer of Frame of Mind on KERA and director of Dallas Video Fest. He had no doubt that Norm would make a great subject.  “One of the things that make a great documentary is a passionate subject who has observed and done a lot.  Norm is so passionate about sports and has been for so long. He has seen so much and talked about it for so long…”  Bart continues, “Norm has elevated sports talk beyond wins and losses to stories about people—people serving, people working hard—and he tells these stories in a compelling way. He makes the days when our teams are not doing well much better, by understanding things on a deeper level.”

Norm says his days are much better because of his wife Mary.  The two have been inseparable since they married in 2011.  “When I first met Norm,” says Mary, “I had no idea who he was. I was just drawn in by his charismatic personality. I believe that’s why we fit so well together—we really love and care deeply for one another.” Norm became stepdad to Mary’s sons, Zach and Alec Danz, and their family flourished. Alec and Tiffany Danz live in Oklahoma City with “the apple of their eye,” 5-year-old granddaughter, Gwendolyn. Zach is recently engaged to Nurtaç Turkeli, whom he met while studying and working in China.

Mary’s passion is photography, and Norm calls her work “spectacular.” She’s had the opportunity to explore her talent as the two have traveled all over the world including locales like Iceland, the Galapagos Islands, Tuscany, and Africa.

It’s the story of an African athlete that has drawn them into a joint project.  When Kenyan Kipchoge “Kip” Keino beat the USA’s youngest athlete in track at the Olympics to win gold in Mexico City in 1968, Kip was thrust into the national limelight.  His athleticism earned more medals, and he became a sports hero, especially in his home country.  Norm and Mary became fascinated when they learned how he went on after his athletic career to open an orphanage that has housed over 90 children and to open the Kip Keino school in Kenya.  Lloyd Fass with Penelope Studios is working with Norm and Mary to share his amazing story.  “Norm appreciated the incredible moment in athleticism and equally how [Kip] used his fame to help others around him,” Lloyd says.  Maybe he appreciated it because the story felt familiar—after all, Norm has also used his fame to help others.

What’s kept Norm going all these years is his passion for what he does.  “I love the competition and the arena.  I have all my life and continue to do so today.”  His passion for sports, broadcasting, new challenges and experiences, his family, and making a difference are what have earned his renown in his field and in his community.  Talking to him about our local teams, Norm says, “I think DFW sports fans are the luckiest ones in the world.” Actually, those fans are lucky to have him.

Editor’s Note: Norm’s documentary will air on Frame of Mind on KERA TV on November 21 at 10 pm on channel 13. There will be a screening of the film on November 6 at Alamo Drafthouse Cedars.

Tri Delta Bakes up a Winter Wonderland of Cookies & Castles™