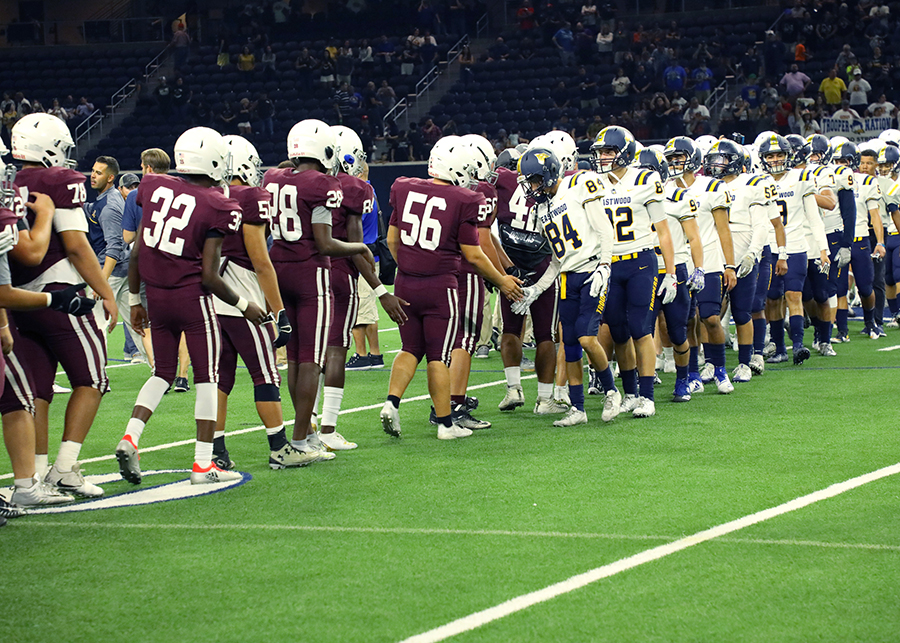 Last night my son played in his first Varsity football game.  It happened to be televised from the Dallas Cowboys’ Star Center in Frisco against El Paso’s Eastwood High School.  The game garnered national attention – it was highlighted on Good Morning America this morning – and the hype leading up to the game rivaled a major college match-up.

The thing is, these are both moderately-good teams.  What made it a great game really had nothing to do with any plays called, but with the spirit of teamwork, good sportsmanship, and healthy competition so often missing in youth sports today.  Really though, it was even more than that.  It was about healing.

You may have heard the story that the shooter who ruthlessly killed 22 people at the Walmart in El Paso graduated from Plano Senior High School, the opponent in this game.  It’s my alma mater as well, and my daughter graduated from there last year.  The shooter and my daughter were in middle school together.  When I learned he was part of “my” community I felt shame, but last night I could be nothing but proud to be part of Plano.

Before the game the players high-fived, hugged and clapped shoulders; they stood together for the national anthem; the drill teams and bands from both schools performed together at half-time, players pulled up opponents after a tackle on the field.  Plano fans cheered for the Eastwood players as they ran on the field, held up signs showing support for El Paso, and many fans wore t-shirts that had been sold by the Plano Quarterback Club with the logos of both schools and the names of players of both teams on the back.

There was a lot more pressure on this game than any other.  The teams practiced until late every night in preparation, watched film to study the other team’s strategies, and studied new plays.  Ultimately for my son’s team, it led to a check in the “W” column, but that’s not what this game was about.  The soul of El Paso was proven by the way their community responded to the tragedy in their city, and the soul of Plano was proven not by the actions of one man, but by the way a community came together through a game of football to show who we really are.  Most importantly, all the kids saw that hate does not win, and healing starts when you open your hearts to someone else.

My parents, my younger daughter, and I were there as part of the ensemble – including Jerry Jones and the Cowboys cheerleaders – to greet the Eastwood players as they came off the bus and into the stadium.  As we were waiting, a group approached my family and asked if we were from Plano.  They had made the long drive from El Paso, and one of them had a grandson playing in the game.  We spoke for a while about how saddened the people of El Paso had been but how they really are “El Paso Strong.”  My mom said, “We are just so sorry.”  I think she wanted to express condolences as well as an apology on behalf of everyone. The woman reached out to hug her, and said, “It’s ok.  We don’t harbor any ill will, and I think this game is just what we needed.  Regardless of the outcome, it’s going to be exciting.”  I hope when my son looks back at his first big game years from now, he will see that sometimes football is not just a sport.  I hope he learned some lessons that will affect not just how he approaches other games, but how he approaches life.  If we can all practice “being a good sport” that really would be exciting.